At meeting of the American Geophysical Union, Musk chats freely 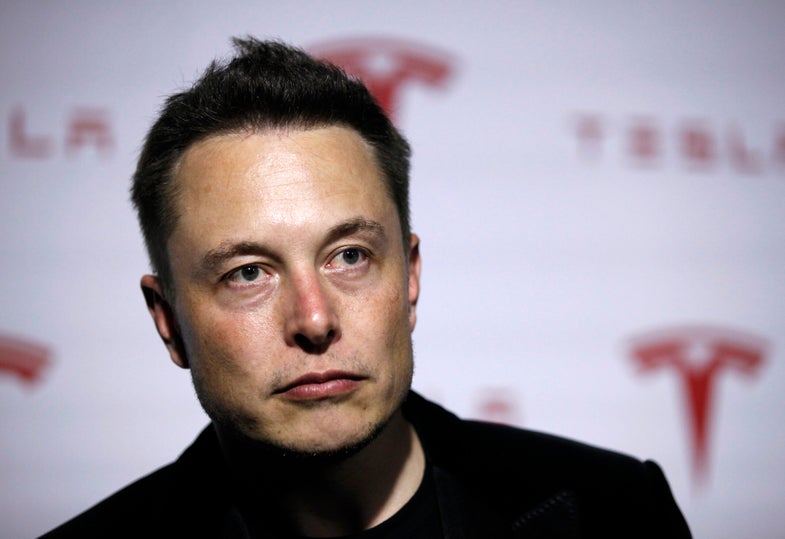 Today at the fall meeting of the American Geophysical Union, the hottest lecture was a forum with Elon Musk, inventor and potential supervillain. Excitement was high, and the line to get in was absolutely massive.

Luckily, Popular Science reporters are excellent at waiting in line, and with much patience got into the highly anticipated forum.

Musk knew his audience, sprinkling his answers to interview questions with statements like “I am super into science”, advocating the wildly controversial opinion that increased science funding is actually a good idea, and saying that “I do think geoscience is very important.”

But really, what else are you going to tell a conference of over 23,000 geoscientists? With the next launch of his Falcon 9 rocket approaching this weekend and the spectacular explosion of the last rocket in June still fresh in everyone’s mind, he let us all know how he was feeling.

“Losing the rocket was actually quite hard. It was quite emotionally traumatic actually. It was on my birthday, you know.” The latter statement garnered him a chorus of ‘awws’ from the audience.

Presumably because of that last failure, we’re guessing that all Musk wants for Christmas is a change in the physical properties of the Earth, namely gravity, which is just not cooperating with his rocket plans.

“It’s crazy how much gravity affects things,” Musk said, soon after noting that “rockets are hard.”

But Musk is still looking towards the future, and thinks that eventually colonizing Mars is humanity’s best shot at long-term survival. Musk said; “It will be super hard to do this and it will take a long time. I don’t expect to live to see it but I think if we aim for that objective we (our species) will be ok.”

The universe is the answer.

He also said that he thought that any life on Mars is likely far below the surface, where it might be shielded from radiation. So in his opinion, he doesn’t think that anything that humans do on the surface will affect those tiny Martians. That’s likely disheartening to all the scientists who meticulously built the Mars rovers at great expense in immaculate clean rooms, for the express purpose of preventing contamination of Mars with Earthly life forms.

And finally, he revealed one of the books that inspired him to reach for the stars: The Hitchhiker’s Guide To The Galaxy.

“I used to worry about the meaning of life a lot when I was a teenager, until I read The Hitchhiker’s Guide To The Galaxy and it basically said that the universe was the answer.” Musk said. ” I think it helps provide meaning in life.”

So long, and thanks for all the fish.