Watch NASA launch its next rover to Mars

It's the third Mars-bound launch this summer—China and the UAE sent probes earlier in July. 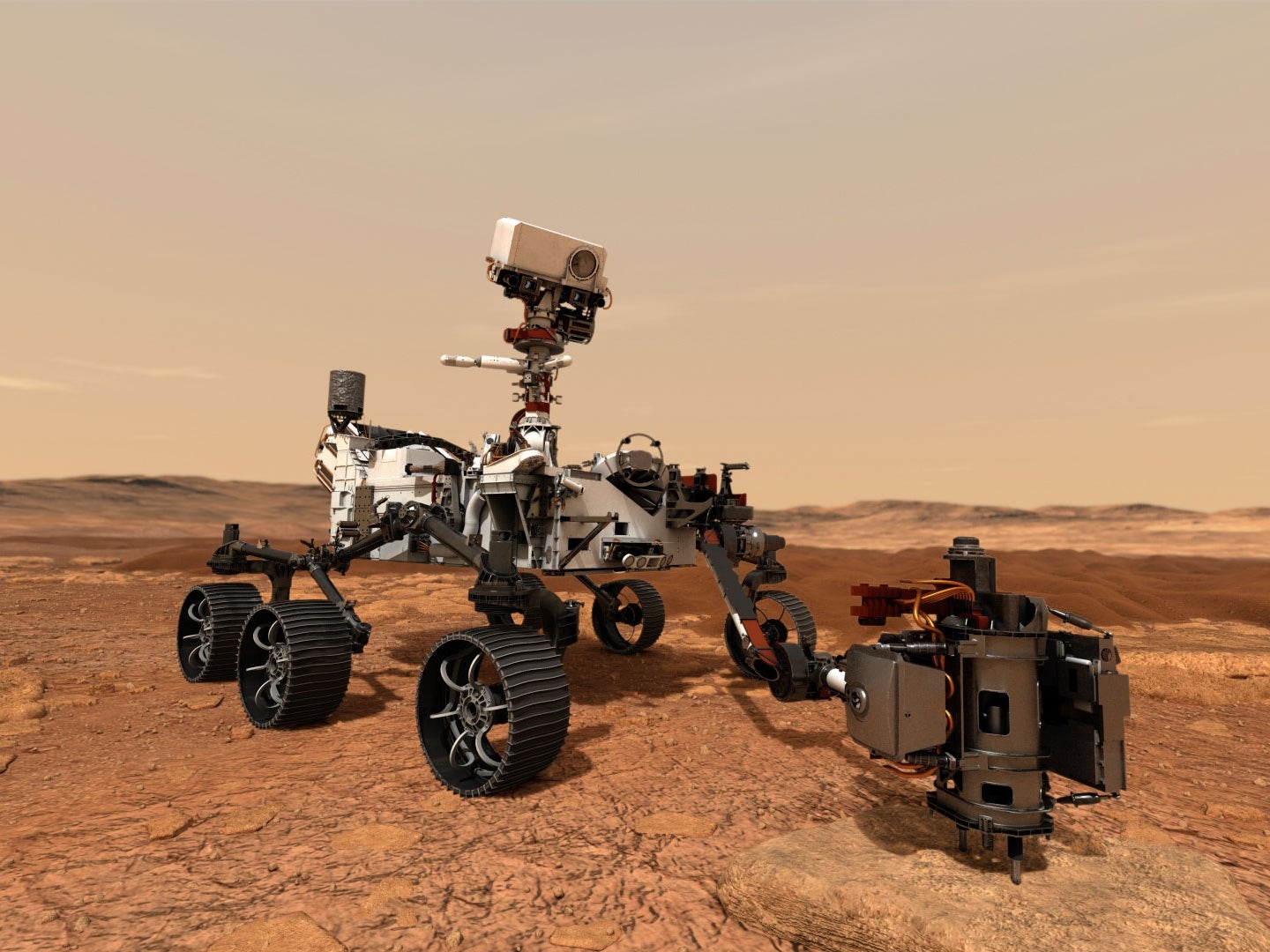 In this illustration, NASA's Mars 2020 rover uses its drill to core a rock sample on Mars. NASA/JPL-Caltech
SHARE

Update 7/30 at 9:06 am EST: Perseverance launched from Cape Canaveral and successfully separated from its Centaur rocket. It’s on its way to the Red Planet, set for arrival in February.

This month, a flotilla of spacecraft is set blast off into space with a one-way ticket to one of the solar system’s most mysterious objects: Mars. Two launches have succeeded, and on Thursday, it was NASA’s turn. All three missions are tasked with helping answer a question that has puzzled scientists for decades—is there, or was there ever, life on the red planet?

Mars is a dead, cold desert world with a wispy atmosphere. But that wasn’t always the case: Decades of exploration on our planetary neighbor have made it clear that in its early history, Mars was vastly different. Growing evidence from previous missions to Mars—including NASA rovers Spirit, Opportunity and Curiosity—have shown that the planet could once have been lush with liquid water oceans.

Earth and Mars are approaching prime orbital positions for interplanetary travel. So with the duo lined up, the Red Planet’s launch window has opened. A Japanese rocket launched the United Arab Emirates’ Hope orbiter on July 21—marking the first time any Arab nation has launched an interplanetary mission—and on July 23 China launched Tianwen-1, an ambitious mission that includes an orbiter, lander, and rover. NASA’s Mars 2020 mission, which was scheduled for launch on July 30 at 7:50 am EDT, that will eventually deliver a rover called Perseverance.

If all goes well, Perseverance will land on the Martian surface in February of 2021 after a seven-month, 34-million-mile journey and an elaborately choreographed descent through the scant Martian atmosphere. The van-sized rover will carry a suite of cutting-edge tools geared for poking and probing the Martian surface and atmosphere while hunting for the carbon building blocks of life and other signs of past microbes.

It will land “right in the promised land for science” as Kenneth Farley, Mars 2020′s project scientist and a geologist at the California Institute of Technology, puts it. Jezero, a 28-mile-wide crater just north of Mars’s Equator, was once home to an ancient river that fanned out into a lake between three and four billion years ago, depositing mud, sand and sediment. According to Stack Morgan, this is the best place to look for evidence of ancient life on Mars. “When you think about ancient lakes and ancient deltas on earth, those environments are just dripping with life,” she says. “They are very habitable.”

The rover can conduct a number of experiments on-site, but it will also collect rock samples as it trundles across the crater and leave them in caches to be collected, in several years’ time, by another (as yet unbuilt) rover. NASA and the European Space Agency (ESA) are designing two follow-up missions to retrieve the samples, which would be the first-ever sample return from Mars. Then, scientists can study these samples using an arsenal of fully-equipped terrestrial labs.

Science aside, the mission will also be an incredible show of engineering. Tucked under the Perseverance lander, the Ingenuity helicopter will hitch a ride along with the rover to the red planet. “This is more of a feat than you might imagine,” says Farley. It may be an extremely intricate piece of engineering, but it still tugs at some nostalgic heartstrings. “Many people immediately think of their son’s drone.”

For the engineers that built Ingenuity, it’ll be a Wright Brothers moment: If Ingenuity takes to rarified Martian air, it could become the first vehicle flown on another planet. The hope is that Ingenuity will provide a bird’s eye view that will enable better exploration in different worlds that are “either too dangerous or too far away to easily explore on their own,” adds Farley.

The risks are numerous. Mars is particularly good at destroying our robotic explorers: Of humanity’s dozens of attempts to orbit or land on the rusty red planet to date, only about half have succeeded. Perseverance will use a slightly modified version of the same system that got Curiosity to the Martian soil, but that’s not a guarantee. “Engineers still tell me this is their biggest moment of concern: Don’t assume that because it has worked once, it will always work,” says Farley. “It’s a good lesson to be a little humble about it going in.”

Unlike the other two Mars ventures scheduled for this year, the United Arab Emirate’s Hope probe will not land on the Red Planet but instead orbit it for an entireMartian year—687 days. “We’ll be able to cover all of Mars, through all times of day, through an entire Martian year,” Sarah Al Amiri, science lead for the mission and the UAE’s minister for advanced sciences, told Nature.

Expected to enter the Martian atmosphere in 2021, the same year that the UAE celebrates its 50th anniversary, the launch comes just six years after not only the announcement of the orbiter but the creation of the UAE’s space program itself.

Onboard Hope will be three cameras for studying the Martian atmosphere at visible, infrared, and ultraviolet wavelengths. From its high orbit, Hope will give scientists their first global view of Martian weather at all times of the day. Over its two-year mission, it will investigate how dust storms and other weather phenomena near the Martian surface speed or slow the loss of the planet’s atmosphere into space.

China is also ready to make its Mars debut, though the country has been tight-lipped about its efforts. The mission—called Tianwen-1 or the ‘quest for heavenly truth’—is ambitious, involving an all-in-one orbiter, lander and rover packed with 13 scientific instruments to examine the Red Planet from orbit and on its surface. When it arrives, Tianwen-1 will examine how water ice is distributed on Mars, as well as the planet’s physical evolution and its habitability over time.

A fourth mission, Europe’s Rosalind Franklin rover, was supposed to join this Martian fleet. But it was delayed until 2022, in part because of the coronavirus pandemic.

“The thought that we’re now going to have company in space and on Mars is so exciting,” says NASA’s Stack Morgan. “My colleagues and I cheer on these other efforts and are really pulling for them knowing that great science is going to come out of the missions. Here’s hoping that we’ll all be exploring Mars together in not too long.”