Beautiful Map Reveals The Evolution Of The Protoplanet Vesta

My, what epic epochs you have there 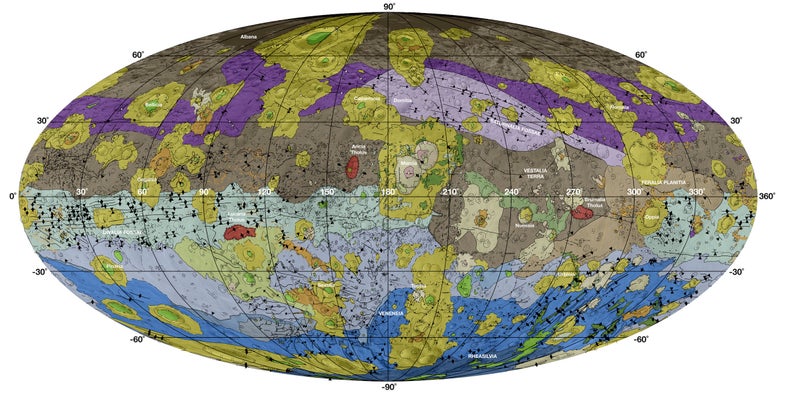 More than a million miles away from Earth, Vesta sits cold and dark in the asteroid belt between Mars and Jupiter. Depending on what naming scheme you use, Vesta is either the largest asteroid in the solar system, or a very small planet.

A few billion years ago, when the Sun was very young, Vesta was growing into a planet. But then the gigantic mass of Jupiter disrupted Vesta’s development, freezing it a state of embryonic planetary formation. By studying it, scientists think they can learn more about how planets grow and evolve.

“One of the interesting things about Vesta is it may be the oldest planetary-type body in the solar system,” says Christopher Russell, a planetary physicist at UCLA. “It was there right at the beginning, in the first million years” after the supernova explosion that gave birth to the solar system.

NASA’s Dawn Mission, which Russell leads, explored Vesta for more than a year in 2011 and 2012. Now the team has used that data to map out the age of the different features on Vesta’s pockmarked surface. They’ve divided the protoplanet’s history into four geologic time periods, with names that sound like they’re straight out of Game of Thrones: Pre-Veneneian, Veneneian, Rheasilvian, and Marcian.

The paper, which will be published in December, notes that Vesta’s new timescale “clarifies the geologic evolution of the mapped body, which can then be compared with the corresponding timescales of other planets,” such as Mars, Mercury, and the moon.

How The Map Was Made

While Dawn orbited Vesta, it mapped the surface and gathered data about the composition of its rocks. The researchers used this and other data to pinpoint the key features on Vesta’s surface—mostly craters and the material that splattered everywhere during each impact. Then they used the craters themselves to figure out approximately how old each feature is.

Russell explains: “Both the Moon and Vesta are in environments in which material falls on them from space, including meteoroids and rocks as large as asteroids. And they come at a pretty constant rate. We estimate what that rate is, by looking at the numbers of craters on the bodies of different sizes.”

Larger collisions happen less frequently than smaller collisions. If, for example, 10-mile-wide impactors happen once a millennium, while 10-foot-wide rocks hit every 10 years, the team could look at the ratio of big to small craters in a region. On bodies like Vesta and the Moon, there are layers upon layers of cratering. Just like on Earth, scientists know the older layers—the craters that are dimpled with other craters—are older.

Three gigantic collisions dominated Vesta’s history. The Veneneia impactor likely struck between 3.7 and 2 billion years ago. Surface features that were created before then are labeled in brown on the map above, while features that happened afterwards, during the Veneneian era, are colored purple.

Rheasilvia struck sometime between 3.5 and 1 billion years ago, creating the areas shown in varying shades of blue and red. (This image from the paper provides a more detailed key as to what the varying rainbow shades mean.)

Finally, the youngest parts of the protoplanet, shown in orange and green, where created after the Marcian collision about 250 million years ago.

“We wanted to go back in time by traveling through space, and learn about the earliest epochs,” Russell explains. “By doing this geologic mapping, we’re learning much more about how the bodies formed in the early solar system.”

The Dawn Mission will arrive at Ceres, the solar system’s largest planetoid, in March. Russell says the spacecraft will begin beaming back maps and images to Earth starting probably in late April. 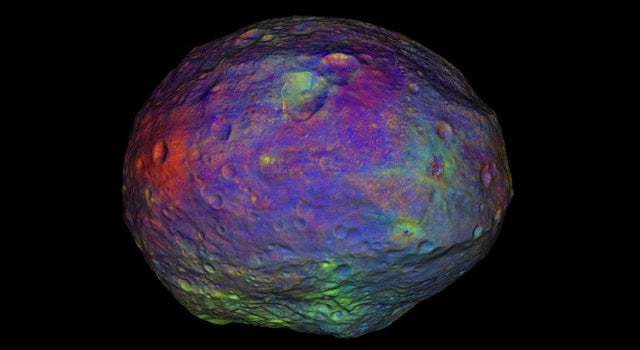 This shot, from a video taken by NASA’s Dawn mission, shows Vesta, the giant asteroid, in a new light. It’s not really those colors, of course. It’s just colored that way to show elevation. Still pretty though. Read more here. 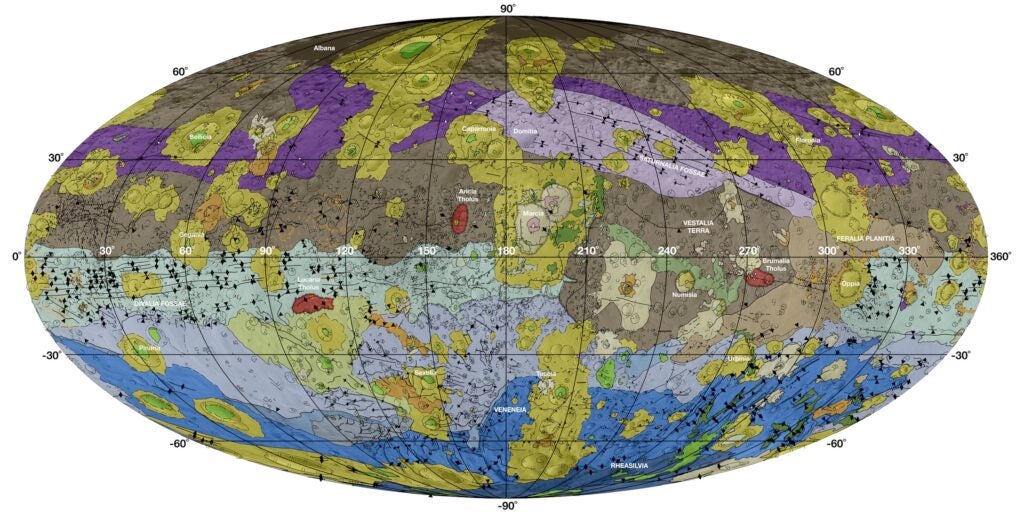