Why Are There No Close-Ups Of Ceres Yet?

Blame it on the dark side 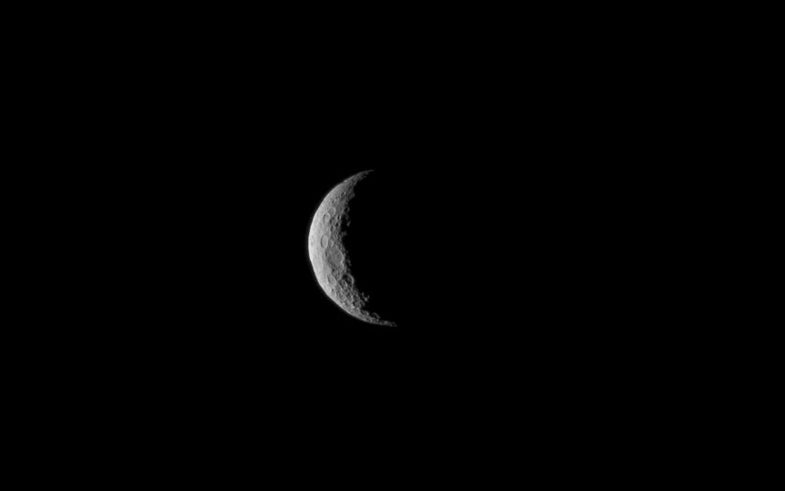 This image of Ceres was taken by Dawn on March 1, a few days before the spacecraft entered the planetoid's orbit. NASA/JPL-Caltech/UCLA/MPS/DLR/IDA
SHARE

Well-informed Popular Science readers know that Ceres is probably a planet-destroying Death Star. We hoped to get a closer look at the dwarf planet’s possible superlaser after NASA’s Dawn mission arrived in orbit on March 6. But so far we haven’t seen any close-ups of Ceres, and there’s a good reason why: the Dawn spacecraft has joined the dark side. Not the Dark Side–just the dark side of this little dwarf planet.

Star Wars jokes aside, rumors circulating in the underbelly of the Internet are saying that we haven’t seen any new pics of Ceres because NASA is trying to hide evidence of alien life. That’s ridiculous for a lot of reasons, not the least of which is that NASA scientists planned this temporary blackout period years ago. We talked to Dawn mission scientist Marc Rayman about the radio silence, and he explained it all has to do with the spacecraft’s crazy path to the asteroid belt.

“This was the quickest route from where we were, which was orbiting around the Sun, to where we wanted to be, which is orbiting Ceres,” says Rayman. “It’s simply part of Dawn’s amazingly acrobatic entry into orbit.”

To help explain, I made this handy (simplified) drawing: 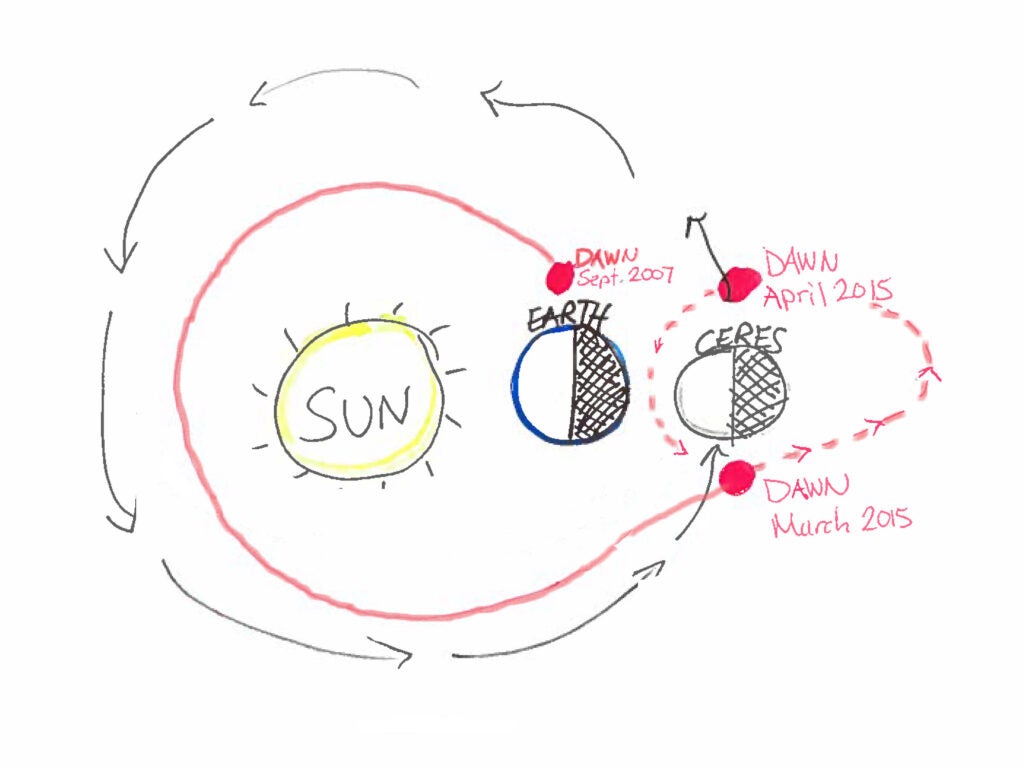 Drawing not to scale (not even close).

Dawn launched from Earth in 2007. On its counterclockwise spiral trajectory (shown in red in the drawing), the spacecraft moved gradually farther and farther from the Sun, out past Mars’ orbit. This month, Dawn finally caught up with Ceres, which lies in the asteroid belt between Jupiter and Mars. The spacecraft pulled up alongside the dwarf planet, which also moves counterclockwise around the Sun. You can see from the drawing that continuing Dawn’s counterclockwise trajectory brings the spacecraft around the side of Ceres that’s facing away from the Sun. Not a lot of good photo ops there. And it will remain on the dark side until next month.

Ordinarily it wouldn’t take quite so long for Dawn to travel from Ceres’ dark side to its bright side. However, Dawn was in a rush to get to Ceres, and it was traveling very quickly. Though gravity and engine braking slowed down the spacecraft, Dawn kept traveling in its original direction for a little while after Ceres captured the probe in its gravitational embrace from 38,000 miles out. As a result of the craft’s momentum, Dawn is orbiting Ceres in a high-altitude, slightly elliptical orbit. And at higher altitudes, the spacecraft has to make a larger circle around the planetoid, so the trip ends up taking more time. The high altitude also slows down the spacecraft because the effect of gravity weakens over long distances. For example, the Moon circles Earth at about 2,300 miles per hour, whereas satellites in low Earth orbit travel at around 17,000 miles per hour.

In April, Dawn will move to a lower, faster orbit at an altitude of about 8,400 miles. At that height, it takes 15 days for the spacecraft to circumnavigate Ceres, and since half of Ceres is covered in darkness, half of that orbital period (7.5 days) will be spent in darkness. But as Dawn moves in closer over the next few months, it will travel around the planetoid faster, and the periods it spends in the dark zone will be shorter, but more frequent. 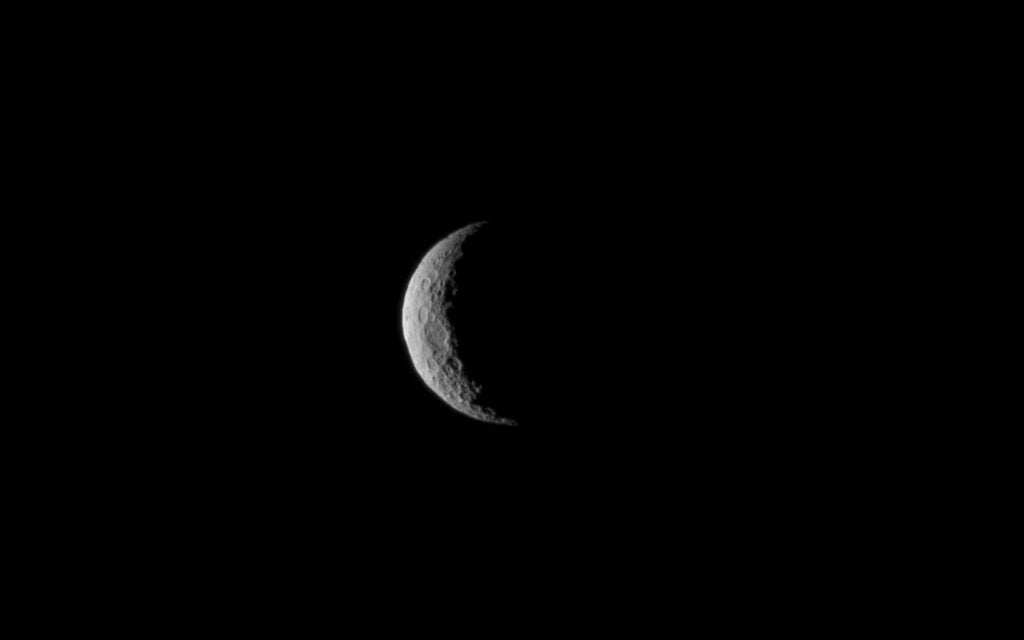 This image of Ceres was taken by Dawn on March 1, a few days before the spacecraft entered the planetoid’s orbit.

Dawn will send back its next snapshots in early April. It will still be on the dark side then, but it will be fast approaching the bright side–so we’ll be able to see a thin illuminated crescent, similar to the photo above, which Dawn snapped before entering Ceres’ orbit. Better pictures will come at the end of April, when Dawn moves into that 8,400-mile-high orbit, where it will begin mapping the planetoid’s surface. From that distance, Ceres will look about the size of a soccer ball viewed from 10 feet away, but the photos will be three times better than the Ceres/Death Star gif above.

Then, expect the pictures to just get clearer and clearer. By the end of this year, Dawn will orbit just 230 miles above Ceres, and the pics will be 100 times better than anything we’ve seen so far.

Correction 3/23/2015: An earlier version of this article mistakenly stated the Moon’s orbital speed as 1,000 miles per hour. It actually moves at about 2,300 mph. We regret the error.