Lots of news from Mars today! Here are the results of six new studies of the samples the Curiosity rover took during its first 100 days on the red planet. 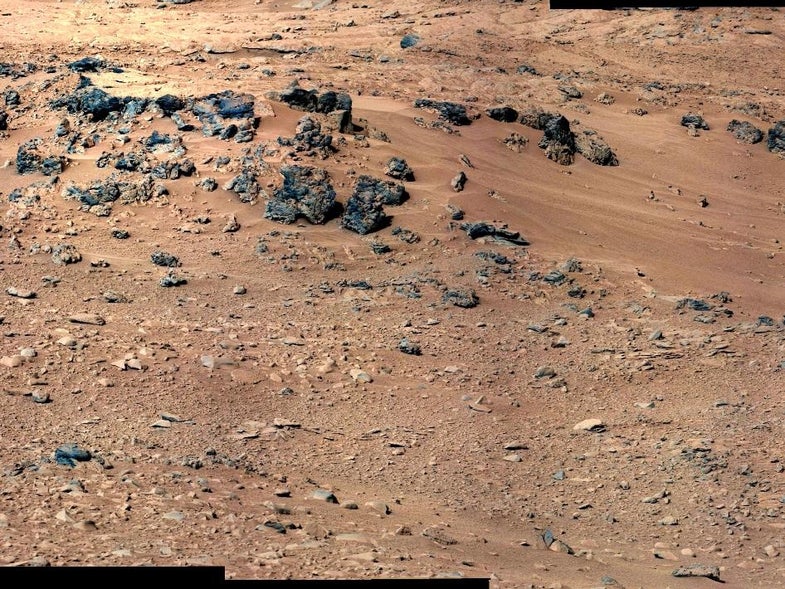 You watched it land, trundle around a bit, and attack innocent rocks. Now you can learn a lot more about the science NASA’s Curiosity rover has been beaming back to Earth. Today, teams of scientists from all around the world are publishing six papers about their analyses of some of the first samples scooped up by Curiosity’s scientific instruments.

The studies tried to determine how friendly Mars would be to any future human visitors. They also looked for clues to Mars’ geological history. It turns out the Martian soil has a bit of water that people might extract with heating, as well as small amounts of a toxic chemical that explorers will have to watch out for.

Here we’ve highlighted our favorite findings, along with links to all of the papers, in case there’s anything you’re into that we’ve missed. Bon voyage, Curiosity.

In the hot seat

One of the first things Curiosity did on the red planet was scoop up some stuff from a patch of sand and dust called Rocknest. (Scientists thought it looked like a little nest for rocks, deputy director of NASA’s Goddard Space Flight Center, Laurie Leshin, told the Science podcast.) The rover then examined its Martian soil sample using its ChemCam, CheMin and Sample Analysis at Mars (SAM) instruments.

In one of its analyses, Curiosity heated a sample of soil, about half the size of a baby aspirin, to about 835 degrees Celsius (about 1,535 degrees Fahrenheit). At that temperature, the minerals in the soil break down and release volatile gases. A team of international scientists found water vapor, sulfur dioxide, carbon dioxide and oxygen in the sample, in that order of abundance. 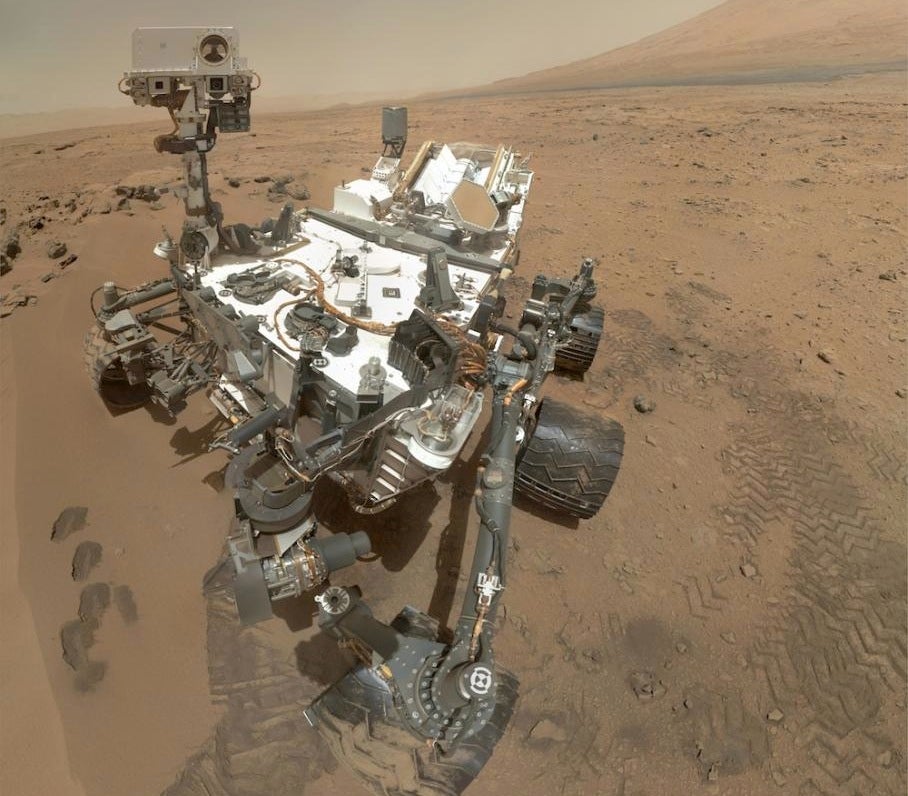 Curiosity at the Sand Shadow Site in Mars’ Gale Crater

So a good amount of the sample—about 1.5 percent to 3 percent by weight—was water. “To me, that’s interesting because of the good resource for potential human explorers,” Leshin says. “Two percent water means that if you had, say, a square foot of this—or, a cubic foot, sorry—of this soil and heated it up, you could get about two pints of water out of it.” Earth’s dirt has about 10 times as much water as Mars’.

One recurring theme from this and other soil analyses: Curiosity and its predecessors, including Pathfinder, Spirit and Opportunity, all pretty much found the same soil composition in different Martian locations. This suggests that water-containing soil is available everywhere on Mars. It could also mean some process on Mars is mixing its dirt evenly across its surface, or that the composition of the planet’s crust is similar everywhere.

The other gases from the heating analysis told scientists about what minerals appeared in Martian soil. There was some bad news for any future Mars visitors. The oxygen was released with chlorine gas, which indicates a small fraction of the soil contains perchlorate, which is toxic if ingested. “It’s good to know now that it’s there,” Leshin says, “so we can plan for when humans go to Mars and there’s dust everywhere. How are we going to deal with that issue?”

Curiosity did not find any so-called organic compounds, a name that doesn’t necessarily mean the compounds come from living sources. Instead, organic compounds contain elements, including carbon, that scientists consider to be the building blocks of life. Such compounds may be important to future Mars explorers.

The surface of Mars is exposed to a lot of radiation and other harsh conditions, Leshin says, so scientists are still holding out hope that the planet has organic compounds tucked away deeper underground. Curiosity is equipped with a drill to find out. 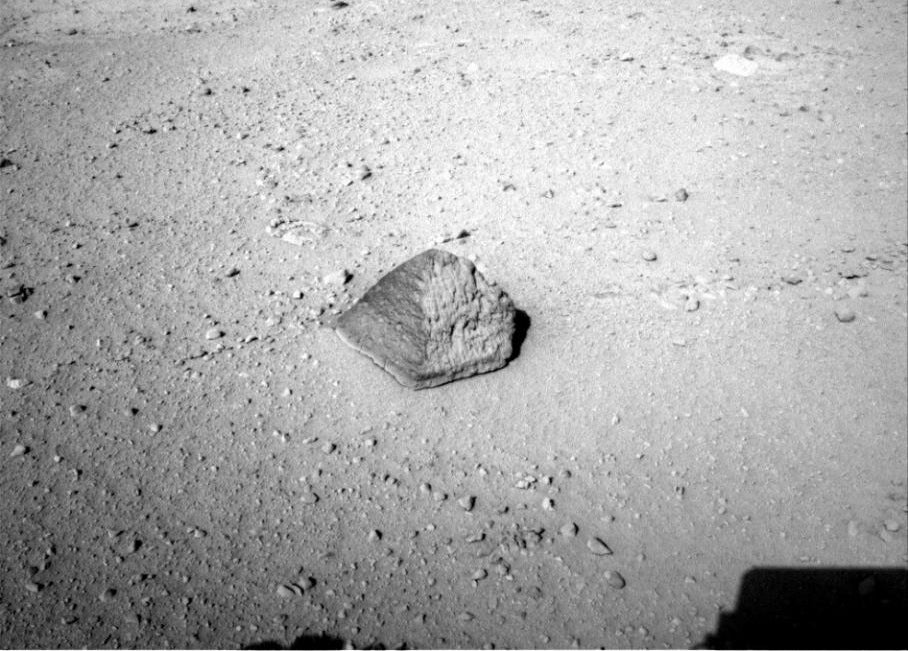 On its 43rd Mars-day, or sol, after landing, Curiosity ran into a pyramid-shaped rock that is unlike any other Martian rock humans have ever found. Scientists named the rock Jake Matijevic, after Curiosity’s former lead surface operations systems engineer, who died in 2012.

An analysis found Jake_M’s proportions of minerals is different from other Martian rocks. However, the rock does look a lot mugearites on Earth, which are a rare type of rock that appear on ocean islands and in continental rifts (Glamorous). Jake_M is so similar to Earthly mugearites, the research team wrote in their paper that if they’d found Jake_M on Earth, they wouldn’t know it came from Mars. Mugearites—and Jake_M—are igneous rocks, which means they formed from magma. (Other missions have found other igneous rocks on Mars, but not mugearite-like ones.)

The team used Jake_M’s chemistry to hypothesize how it could have formed. It would have required either a high amount of water in the magma, or high pressure, or both. That’s evidence that there may be some water under Mars’ crust.

Eager for more? Here’s a paper about the two different types of soils that Curiosity’s x-ray and laser instruments found in Rocknest. One was a fine-grained type that other rovers have found in other locations, too. The second was a coarser-grained type that seems more local to Rocknest.

This paper characterizes the soils in Rocknest, examining dirt both with and without a crystalline structure. The non-crystalline stuff is similar to the soil in… Hawaii.

This paper examines a patch of sand near Rocknest, on the lee side of some obstruction to the Martian wind.

Where is Curiosity now?

The little rover that could is still in the Gale Crater, moving as fast as it can toward Mount Sharp. Mount Sharp has geologic layers that may tell scientists more about Mars’ history. The mountain may also contain organic compounds.

There are five planned rest stops along the way, during which Curiosity will take samples and perform more science. The rover recently passed Waypoint 1.

A mosaic of four images taken by the Curiosity rover on its way to Mount Sharp, on its 400th Mars-day (sol), September 21, 2013, on Earth.
curiosity rover
Mars
Space