Cyclones can be fatal for seabirds, but not in the way you think

An analysis of puffins and other birds could explain mysterious mass die-offs. 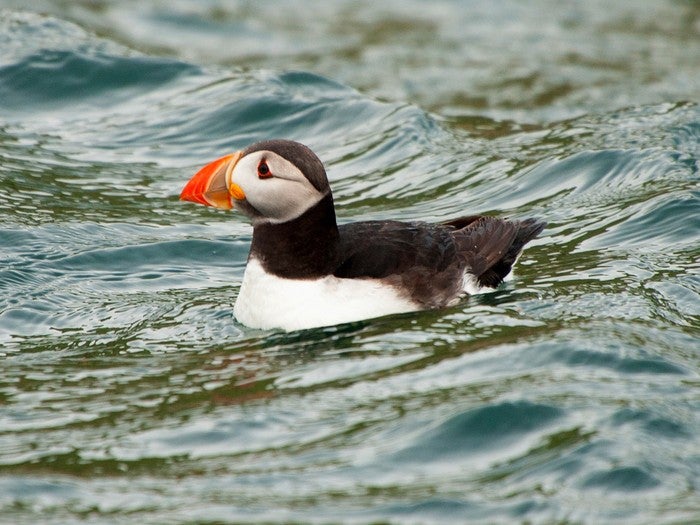 Every winter, the North Atlantic Ocean is beset by cyclones. Thousands of seabird carcasses wash ashore in Europe and North America after especially ferocious storms, a phenomenon known as “winter wrecks.” The underlying reason why these birds perish, however, is still a mystery to scientists.

This week, researchers proposed that the hapless seabirds are starving to death during storms. The team compared the locations of winter cyclones with the wintering grounds of more than 1,500 seabirds, then calculated how much energy the birds must burn to keep warm during stormy weather.

“What was really surprising for us was the fact that we didn’t observe any expenditure increase according to the cyclonic conditions, meaning that in fact seabirds do not die from hypothermia,” says Manon Clairbaux, a postdoctoral researcher at University College Cork in Ireland and coauthor of the study. Rather, the birds probably starve because they cannot reach their prey during the turmoil, she and her team reported on September 13 in the journal Current Biology.

Seabirds are among the most threatened bird groups and face a number of hazards including habitat loss and invasive species. Winter wrecks further exacerbate the problem; in the winter of 2014 alone, Clairbaux notes, more than 43,000 seabirds were found dead or weakened along the Atlantic coast of France.

To understand how winter cyclones imperil seabirds, she and her colleagues visited the summer breeding sites for five species, including little auks, Atlantic puffins, common and thick-billed murres, and black-legged kittiwakes. Altogether, they stopped by 39 sites and fitted 1,532 birds with tiny devices that logged ambient light levels, which are used to determine the gadget’s rough location. The researchers retrieved the devices the following year, after the birds had journeyed out to sea for the winter and then returned to their summer colonies to breed anew.

[Related: Turning the lights off for a few nights each year could save millions of birds]

The researchers next consulted data on cyclones that occurred in the North Atlantic and surrounding waters between the months of October and February from 2000 to 2016. They divided the seas into a grid of 250-kilometer (155 mile) squares and calculated the average number of cyclones of different intensities per month that struck each square.

Clairbaux and her colleagues compared this map to the wintering grounds of the birds they’d tracked. They saw that seabirds from every species and breeding colony were likely to encounter powerful cyclones during the winter, but those visiting certain areas such as the Barents Sea and the waters around Iceland were especially vulnerable.

Finally, the team calculated the energy demands of all five species under both typical winter and cyclonic conditions. To do this, they drew upon weather data such as air temperature and wind speed for a seabird wintering hotspot off the coast of Newfoundland that measured 1,000 kilometers by 1,000 kilometers (about 621 by 621 miles). The researchers then determined the metabolic rate necessary for an average individual to maintain its body temperature, taking into account characteristics such as weight, body fat, and time spent diving and flying for each species.

Unexpectedly, the team found that the birds’ energy needs were generally similar during cyclones and more placid conditions. However, scoring a meal is much harder when a cyclone is raging. Whether the birds go hungry because visibility is reduced, their prey is hiding or scrambled about, or for some other reason is not yet apparent. To find out, Clairbaux plans to investigate how seabird diving and flight behavior changes during winter cyclones.

Even if starvation is the main driver of seabird winter wrecks, she and her colleagues note, other dangers such as drowning and collisions with reefs and rocks may also play a role in the die-offs.

Still, the researchers found, seabirds may succumb to starvation very quickly while a storm rages. They calculated how many days a member of each species could endure without food during a cyclone, and found that little auks in particular could only fast for several days.

These birds carry limited fat stores and struggle to fly when the wind picks up, Clairbaux says. “They cannot cope with long starvation,” she says. “Two days of harsh conditions are just enough to kill little auks.”

Climate change is expected to cause severe winter cyclones to become more common and to shift northwards. Seabird communities are also expected to head north along with their prey. This means that seabird populations may become more vulnerable to winter wrecks in the future, Clairbaux and her team concluded. However, the findings could help scientists better gauge the threats facing seabird populations now and in the future.