I built a sniffing machine to protect dogs

Canines can detect poachers' contraband, but the job puts them in danger. 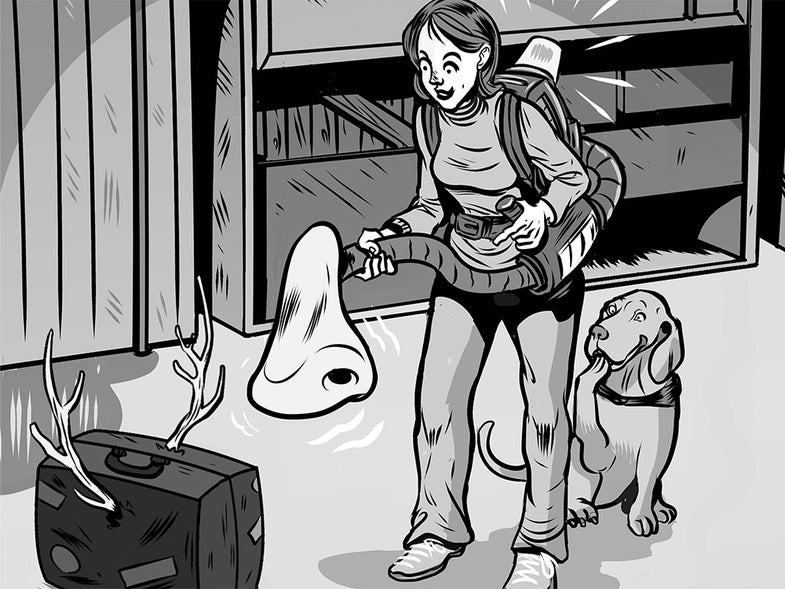 ↑ Jennifer Day, biologist at the University of Washington at Seattle

Each year, poachers traffic thousands of tons of illegal wildlife products through the world’s biggest ports. Detector dogs like the ones I work with are among the most effective means of finding that contraband. Trained canines can sniff out minuscule amounts of ivory, rhino horn, tiger bone, and other illegal products with greater than 90 percent accuracy.

But these amazing canine workers will push themselves too hard if you let them. In searching cargo containers, trained animals can encounter toxic substances, dangerous machinery, and extreme heat. Some have even died on the job.

There is a way to make things safer (and more efficient): drawing air from shipping containers, running it through scent-trapping filters, and then giving that odor to sniffer dogs in a controlled environment. That way, customs officials can search inside a container without anyone actually opening it up. South African mine-­clearing company Mechem originally developed such devices in the 1990s in order to detect bombs, but small governmental wildlife departments can’t afford them. So my university’s Center for Conservation Biology teamed up with the World Wildlife Fund to make our own version from basic materials.

For the past year, we have been perfecting a 15-pound ­Ghostbuster​-style backpack. Inside, a lithium battery powers a leaf blower with an engine we reversed so it sucks in air. That blast travels through a hose to a removable canister—it attaches with bespoke 3D-​printed ­components—that contains the cotton scent-collection pad. I spear­­headed the design, and I remember going to the hardware store while very, very pregnant to look at leaf blowers and vacuums, putting my hands on them, and brainstorming.

Soon, we’ll start conducting small-scale trials, testing dogs with samples of shark ​fins. Once we determine how much odor they need to make a detection, we’ll train them on other materials. This has the potential to really revolutionize the way customs detects contraband.

As told to Mary Beth Griggs and Rachel Nuwer