A stellar suspect in the mysterious beachings. 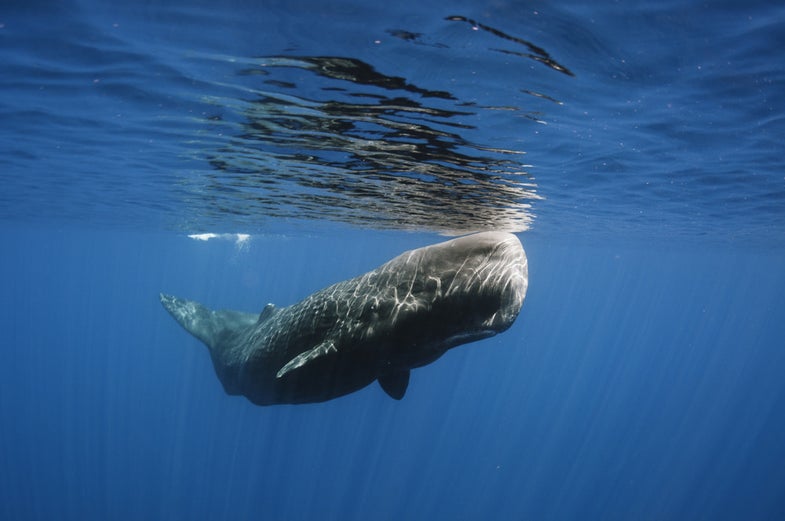 The same phenomenon that creates the Northern Lights might also be confusing male sperm whales. In case you’ve forgotten already (really, how could you?), early 2016 brought a veritable tidal wave of beached spermaceti in the North Sea. No one could figure out why at the time, but thanks to a study in the International Journal of Astrobiology, we now have a working hypothesis: it was those gosh darned solar storms at it again.

Charged particles from the Sun are constantly flying towards the Earth and getting all mixed up in our magnetosphere, which is the magnetic field surrounding our planet. They mostly impact at the poles, where the magnetosphere has its poles and is therefore most susceptible to disruption. The collisions between particles give us an aurora (a.k.a. The Northern Lights). Sometimes the Sun spews more particles than normal during what’s called a coronal mass ejection, and when that cloud hits us, it creates a solar storm. They don’t just happen at the poles, though they are more frequent in those areas. And they happen on other planets, too.

What does this have to do with whales?

Whales are similar to birds, at least in this respect. The going theory is that some species use the magnetosphere to navigate over long distances in much the same way that migrating avians do, since whales also travel quite far on a regular basis. It’s not the only way they navigate. Sperm whales use a lot of echolocation both to find their prey and to, you know, not crash into things.

Disruptions in the magnetosphere mess with that navigation system. Migratory birds seem to change altitudes in magnetically abnormal areas, and homing pigeons have more trouble finding their way. If whales use the same kind of internal navigation, they too might be running off course.

Sperm whales especially are used to quiet magnetic fields, because they live in warmer waters where the magnetosphere is calmer. The females and calves tend to stay in those climes, but young males leave their families to form bachelor pods. They travel north together, many of them bound for the Norwegian sea, where there are squids a-plenty—a delicacy in sperm whale cuisine. That area, along with the North sea, is far shallower than their normal feeding grounds, and dotted with many more land masses. It’s possible that if their internal navigation is out of whack, they could get disoriented and accidentally swim towards a shore. This wouldn’t be a problem in the open ocean, but in coastal regions it spells a beaching.

Do we know that this is how those sperm whales died?

Unfortunately, we don’t. These researchers have identified two solar storms that would align well, timing-wise, with the mass beachings we saw in 2016. But they couldn’t say for sure that this was the cause. Whale autopsies showed that the spermaceti were perfectly healthy and had recently been chowing on some squid, which implies that they were traveling south from their annual feeding fest when they got lost. Beyond that, we may never know for sure what happened.

It’s worth noting that past studies have found an association between solar storms and whale beachings, so this theory isn’t totally out of the blue.

It’s also worth noting, just as a fun fact, that sperm whales aren’t so-named because of their resemblance with sperm (though honestly, there is one). Back when the oil industry was pretty much just whaling, sailors would go out in search of sperm whales to gather the waxy oil that they store in their giant, square heads. The whales themselves seem to use their spermaceti oil to create loud clicks for use in echolocation and communication. Humans liked it because the purified oil could be burned and stayed liquid even in very cold weather. So sailors would kill a sperm whale, hack off its head, and pull it on board. There they would crack open the head to reveal the spermaceti, which with its whitish hue and semi-liquid appearance, looked to seamen like semen. So they called it spermaceti: “sperma” meaning semen in Latin, and “ceti” meaning whale. Why the sailors thought a whale’s semen was stored in its head is still a mystery.