Our glass and metal buildings might pose a threat. 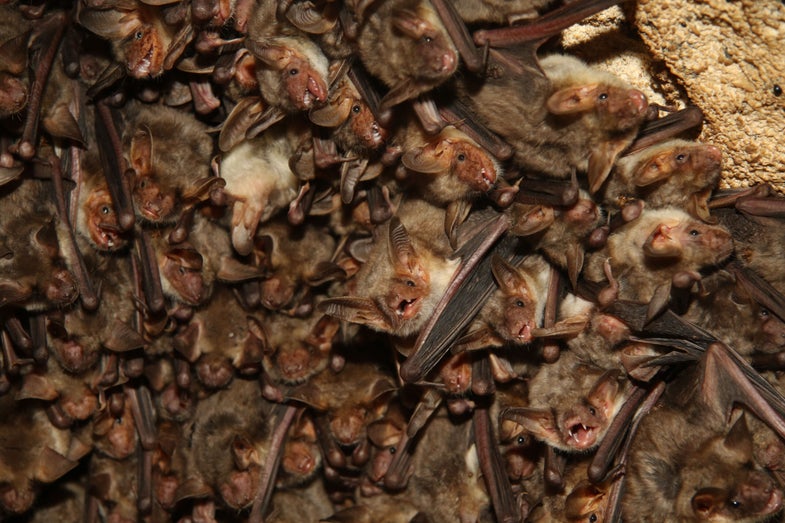 When it comes to navigating at night, bats are among the champions of the animal kingdom. But it turns out that these fuzzy fliers do have one weakness: super-smooth vertical surfaces.

Bats find their way in the dark using echolocation—sending out sound waves and listening for their echo. Sound waves reflecting off an object back towards the bat can indicate the position of an obstacle to be avoided, letting the animal change its course.

Greif says these surfaces act like an acoustic mirror. The surface is so smooth that the sound waves ricochet off at a steep angle, only bouncing back to the bats when the creatures are positioned directly in front of the surface.

Unless a bat is perfectly lined up as it flies toward a smooth surface, it will be blissfully unaware of the giant thing looming, lost in an acoustic blind spot.

The consequences of the diverted signal can be disastrous—or at the very least, pretty embarrassing—for the bats.

Don’t worry: No bats were harmed in the making of this study. “In our experiments we didn’t see any injuries,” Greif says. “We had them in a small flight room, in a narrow tunnel where they’re flying relatively slowly compared to the speeds at which they might fly outside.”

Some slammed into the surface without changing their flight path at all. Some tried to pull back, but only did so too late. And a select few did manage to avoid the plate entirely. Greif found that those lucky bats were the ones that sent out their sound signals while directly in front of the plate, giving them enough warning to change course mid-flight.

Greif only used a small selection of bats for the study, but 19 out of 21 subjects slammed into the vertical surface at least once. When the smooth metal plate was placed on the floor, the bats didn’t collide at all.

Greif and his colleagues knew from previous studies that bats have no problems with horizontal smooth surfaces. That’s because, while there is no natural situation where a bat might encounter a vertical smooth surface, they frequently see prone smooth surfaces—every time they fly over a pond or puddle. In fact, many of the bats tried to drink from the flat metal plate (needless to say, they were unsuccessful.)

Though this study shows how smooth vertical objects can pose a problem for bats, it doesn’t show whether or not we should be concerned about this biological quirk. It might be dangerous for bats living in a world where humans—and our buildings with glass windows and metal facades—are common. But there’s no way at present to know just how dangerous this might be, or if it’s something that bats can easily shake off.

“Many bats are found injured, but people don’t keep track of what situations they find them,” Greif says. Bats are sometimes found in nature with broken jaws and wings, or even dead, all situations that could be caused by running headlong into a flat, hard surface at high speeds.

People have started tracking birds that have collided with buildings, but data on bat collisions remains rare to nonexistent. There’s anecdotal data about bats, particularly speedy migratory bats found dead next to buildings, but Greif hopes that future research and surveys might lead to a more robust data set.

“One of our hopes of this study is people start paying attention to where they find these injured bats so we can get an idea of the extent of the problem.” Greif says.