How goldfish use booze to get through a hard winter

Who needs oxygen when you can make ethanol? 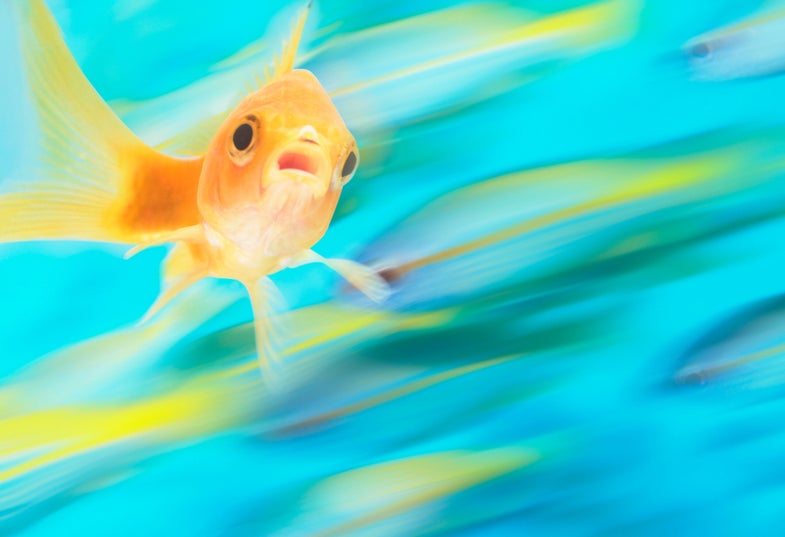 No matter how many goldfish we’ve all buried at sea, the creatures are clearly pretty resilient. Pop ’em in a bowl on your desk and they might last longer than your job. Drop ’em in a local pond and they might grow to monstrous sizes and consume everything in sight, destroying native ecosystems. Stick ’em under ice all winter, and they’ll somehow still be swimming come spring.

Consider for a moment just what a feat that is: sure, it’s cold, and that slows down a fish’s metabolic processes—the chemical reactions conducted in each cell that keep all animals alive. The sheet of ice over a frozen body of water actually helps to trap heat within, so down at the bottom—warm, fresh water stays near the bottom in cold weather—fish can head towards relatively warm sediment and basically chill for a few months. But it’s hard to breathe down in those cozy pockets, even with gills. The ice at the top of the lake keeps new oxygen from entering the system, while the microbes that live at the bottom use up the gas when they eat. Where it’s warmest, it’s also the most anaerobic—and it’s not like anywhere has much oxygen to spare until the ice melts. Without oxygen, the chemical reactions that keep cells running can’t function. And yet these humble looking fish persist.

According to a new study in Scientific Reports, some fish handle the cold by hitting the sauce. They possess an uncommon (like, no other vertebrate can do it) ability to turn carbohydrates into alcohol.

“The ethanol production allows the crucian carp to be the only fish species surviving and exploiting these harsh environments, thereby avoiding competition and escaping predation by other fish species with which they normally interact in better oxygenated waters,” lead study author Cathrine Elisabeth Fagernes of the University of Oslo said in a statement.

Basically, being totally BYOB keeps these fish from building up toxic levels of lactic acid. When there’s oxygen around, inhalation starts a chain of chemical reactions that result in energy for muscles. But if oxygen is scarce, that production line switches over to a quick, non-oxygenated fix, producing chemicals that can release small amounts of energy. Humans experience this on a small scale during any strenuous exercise; if muscles need more energy than respiration can accommodate, they can start to generate it anaerobically. Unfortunately, the result is lactic acid. Exercising humans feel the burn when lactic acid builds up in the blood and muscles, but the chemical can actually cause cell death in high enough concentrations. Five months under ice every winter would definitely put a goldfish over the limit.

But goldfish and crucian carp don’t have to worry about that. Instead of wallowing in lactic acid, they just turn it into ethanol instead. According to Fagernes and her colleagues, this drinking habit comes courtesy of a second set of crucial proteins controlling the energy production pipeline. The first set is used for your standard, oxygen dependent metabolic process. The other set seems to be activated by anaerobic conditions, and is tailored to convert lactic acid into alcoholic waste. While lactic acid would slowly poison our pond-dwelling friends, the ethanol diffuses safely out of their gills and into the icy waters around them. Fancy a drink, anyone?

It gets even cooler: this double dose of proteins may be due to a whole genome duplication event. Gene duplication is common, and it’s a great way for a species to learn new tricks. Bread wheat, for example, has six whole copies of its genome. Most organisms get one genome copy from each parent, making two the standard count. But if someone winds up with more of their ancestral genome copies, well, sometimes something special happens. Because the original genome can carry out the functions it takes to keep the organism alive—ordering the proper protein production at the proper time—surplus genes can mutate without as much risk of killing the bodies that carry them. When a mutation as useful as the ability to survive without oxygen all winter comes along, it’s bound to produce an incredibly successful lineage of fish. At some point around eight million years back, a common ancestor of the goldfish and crucian carp had such luck.

“This research emphasizes the role of whole genome duplications in the evolution of biological novelty and the adaptation of species to previously inhospitable environments,” Fagernes said.

While the fish are well over the legal alcohol limit, it’s not like they’re doing much driving—or much of anything. While their adaptation allows them to survive in northern European ponds where other critters would be toast, they still have a slow, cold, sleepy stretch of time to kill until spring.