How Do You Autopsy a Whale?

Determining cause of death with the help of blubber knives 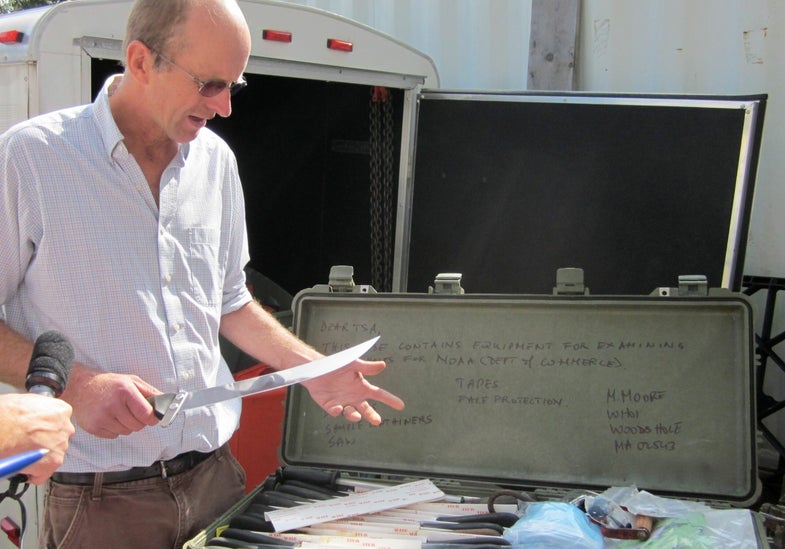 Some unknown terrible person shot a defenseless pilot whale last month, leaving it to swim the Atlantic in agony for weeks before it finally beached itself on the New Jersey shore and died. Authorities are still looking for the shooter. The bullet wound caused a fulminant infection in the whale’s jaw that prevented it from eating, so it basically starved to death. This was determined during a necropsy, an autopsy for animals.

Along with sympathy for the poor creature, this debacle aroused an interesting question: How does one autopsy a whale? With four-ton meat hooks, whaling knives and bone saws, actually. Michael Moore, a veterinarian and whale biologist at the Woods Hole Oceanographic Institution, does it all the time.

Moore spends much of his time studying North Atlantic right whales, an endangered species whose name derives from whalers’ adage that these were the “right whales” to hunt, because they’re easy to spot and float when they die. They’re no longer hunted for their oil, but they are entangled in fishing lines and injured in ship collisions, often suffering for a great while and also succumbing to starvation. “It’s the most egregious animal welfare issue globally at this time,” in Moore’s words. But protecting them requires understanding how they died, and to do this Moore must take them apart, studying their broken bones and lobster net-tangled flukes to determine their exact causes of death.

In partnership with the National Oceanic and Atmospheric Administration, Moore deploys on-call, toting a case full of knives to examine right whales that have beached or are floating in the open ocean. Right whales are baleen whales and at least two orders of magnitude bigger than the toothed pilot whale that was shot, so in most cases, they must be examined right where they’re found — that means on the beach. They either beach themselves and die there, or they’re towed to shore once they have been located at sea.

Moore and other rubber-suited biologists work amid 120,000 pounds of slick black-and-red whale flesh, clambering over and through the carcass to find out what went wrong. Time is of the essence, because the longer they wait, the more the animal’s internal organs break down, making it difficult to determine how it died.

Moore uses a Japanese whaling hook, which is useful for pulling back sheets of blubber to get at the animal’s internal organs. He carries a bone saw — formerly his mother’s — to get through jaws and vertebrae to find the location of a fatal injury. He’s even visited indigenous Alaskan tribes to study their ancestral whale processing techniques.

The pilot whale that died was small, so it was trucked to a necropsy facility at the the Marine Mammal Stranding Center in Brigantine, N.J., down the shore north of Atlantic City. It weighed about 740 pounds when it beached, quite gaunt for an animal that should normally weigh more than a ton. Researchers knew something was seriously wrong, but they had to perform a necropsy to determine what it was. 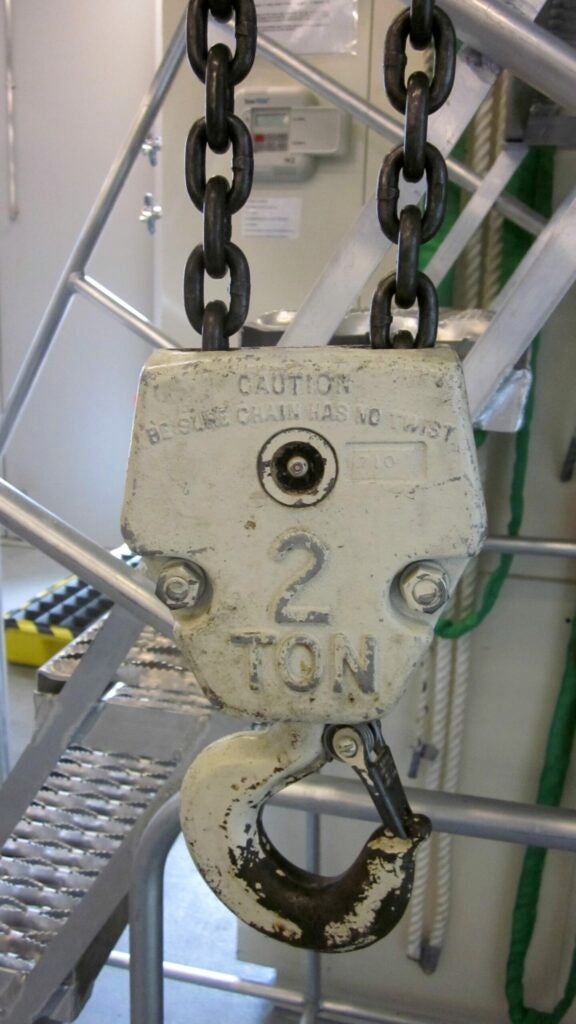 At WHOI’s Marine Mammal Center, where Moore is the director, researchers use a special CT scanner for examining animals’ internal structures, like the inner ears of whales and dolphins. Down the hall is an autopsy room for necropsying smaller mammals like the pilot whale.

The creatures are brought in on trucks and hoisted into the facility on chains rigged to the ceiling, attached to four-ton-rated meat hooks. They lay on negative-pressure steel tables, the same types used in human autopsy procedures, which suck out odors and pathogens as the biologists get to work. The lab also contains deep freezers for stringing up deceased animals; it harbors an overwhelming odor of chemical and organic substances. (It’s somewhat legendary at WHOI that Moore lost his sense of smell while in veterinary school, which he says enables him to get literally inside a rotting animal carcass without losing his lunch or his cool.)

The 11-foot-long pilot whale died shortly after authorities reached its side on the beach on Sept. 24. But it wasn’t until a necropsy a couple weeks later that they knew what happened. The bullet entered near its blow hole, but the wound had closed and faded a bit, suggesting it had been shot about a month prior. The .30-caliber round lodged in its jaw, causing the infection.

“This poor animal literally starved to death,” said Bob Schoelkopf, co-director of the Marine Mammal Stranding Center, in an interview with the AP. “It was wandering around and slowly starving to death because of the infection. Who would do that to an innocent animal?”

That question is now in the hands of the authorities. For biologists like Moore and Schoelkopf, necropsies can at least answer the question of how. Why, of course, is something else entirely.