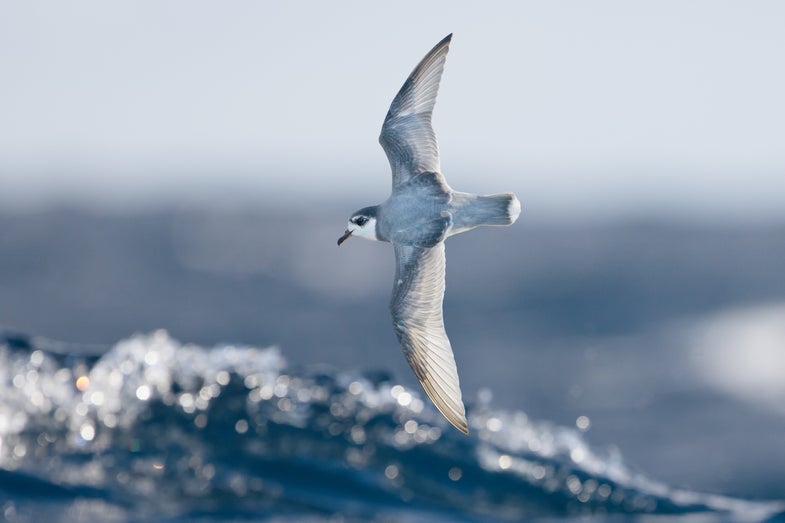 Some species of seabirds, including blue petrels, are particularly vulnerable to eating plastic debris at sea. John Harrison
SHARE

The sulfurous smell of dying algae might be the opposite of appealing to you, but to certain seabirds it’s an olfactory call of “Dinnertime!”, announcing that somewhere in the ocean a veritable feast awaits.

Unfortunately, a new study published Wednesday in Science Advances finds that the appetizing aroma of a good seabird meal is mirrored by the smells emitted by plastic trash. The finding could help explain why seabirds are chowing down on plastic trash in alarming (and increasing) quantities. It would seem that humanity’s trash is another organism’s Trojan horse.

Until about the mid-20th century, many researchers didn’t think that birds could smell at all.

“Scientists have since discovered that most birds can smell and some groups of birds (like petrels, and kiwis, for example) have exceptional senses of smell — some of the best known to science. Seabirds need a good sense of smell because they forage over vast expanses of open ocean (hundreds or thousands of square kilometers) on food sources that are very patchy in nature. In other words, they are looking for a needle in a haystack,” Matthew Savoca, lead author of the paper, said in an e-mail.

If the plastic debris smells like that appetizing needle, there’s no reason a bird wouldn’t be attracted to it — though there could be other factors that compel seabirds to chow down.

“Tube-nosed seabirds use their incredible sense of smell to locate areas to feed well before they can see them. Our work does not disprove that plastic might also look like food to some marine animals that eat it,” Savoca said. “Quite the opposite in fact, if plastic looks and smells like food it is probably more likely to be confused with food than if it just looked like food. The way the plastic appears visually, from the organism’s perspective (not what it looks like to us) is important to consider.”

During the experiment, the researchers put small amounts of common plastic trash (enclosed in mesh bags for easy clean-up) into the ocean for three weeks. When they later examined the debris in a chemical analyzer (normally used for assessing wine flavors) they found that the trash reeked of a compound called dimethyl sulfide (DMS).

That was significant, because DMS is one of the main chemical signals given off by algae as it is being eaten by the tiny crustaceans that seabirds themselves love to munch on. To a seabird with a keen sense of smell, a nice whiff of DMS indicates that krill are feeding somewhere in the area — which means it’s seabird suppertime. The finding could help explain why birds known to use the smell of DMS to find food are six times more likely to eat plastic than birds that don’t. The health effects of plastic on seabirds are still being studied, but the debris can take up room in seabird’s stomachs, leading to malnourishment or even internal organ damage.

Researchers aren’t entirely sure why plastic waste reeks so strongly of DMS. But algae does tend to grow on the detritus. It could be that the algae coating these plastic bags is eaten by other organisms like krill, drawing seabirds to a feeding frenzy. Or perhaps the drying algae dies as the bags float up to the water’s surface, producing the same chemical signature.

Reducing plastic waste could help reduce the problem of seabirds eating plastic, but so could developing plastics that don’t encourage algae growth. Research in the area is still ongoing. As a next step, and as part of his dissertation, Savoca plans to test whether seabirds and other marine animals are actually attracted to the DMS-emitting plastic trash by conducting behavioral experiments.