You can thank the Madden-Julian Oscillation for this wild winter

Swings in temperature are what the MJO does best. 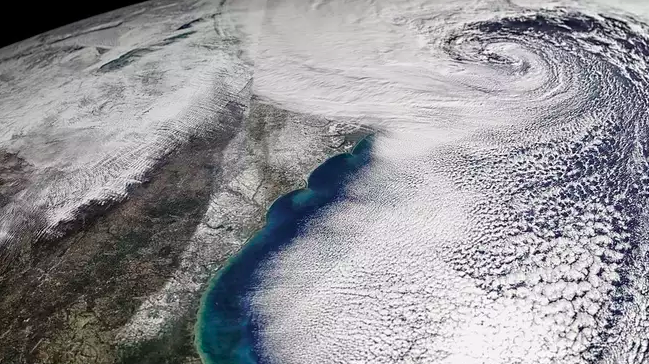 In many parts of the world, February 2018 seemed like it was trying to be spring and winter simultaneously. There were 70 degree days and ferocious blizzards, and everything in between.

All in all, it’s made for a pretty satisfying winter, despite the La Niña conditions. You have the Madden-Julian Oscillation to thank for that. Yeah, that’s right, weather nerds—we’re getting into that sweet MJO science. Buckle up.

Like all climatological phenomena that we hear about in the U.S., the MJO isn’t actually unique to our nation. It’s not even really anywhere near us. It’s a tropical climate pattern that circles at the equator, constantly moving eastward and circumnavigating the globe once every 30-60 days. Think of it like a big atmospheric wave going around and around.

But because the MJO is a massive system of air currents, it doesn’t just change weather at the equator. It has the power to shift jet streams north and south of it, including those that pass over the continental U.S.

The MJO is moving all year, but its level of activity varies a lot. “During winter, it is active only about 40-50% of the time,” writes NOAA climatologist Michelle L’Heureux. And this winter, she notes, “the MJO has been alive and well.” Climate experts track the activity with a phase diagram, which corresponds to the area of the Earth the circulating air is most dominant in. You can kind of piece it together with the phase diagram and a map:

This isn’t necessarily how the MJO acts every year. It’s only when you look at many years of data that this pattern starts to emerge:

When the MJO is in phases 1 and 2, temperatures in the U.S. tend to be colder than average, whereas we see much warmer days during phases 5 and 6. These are, of course, all just general rules of thumb. These patterns tend to hold true more when the MJO is strong (when the line on that phase diagram is farther from the center), but our climate is incredibly, ridiculously, absurdly complicated. The effects of El Niño or La Niña patterns combine with the polar vortex and the MJO—plus a ton of other factors that we won’t even get into here—to create our weather.

But this happens to have been a straightforward kind of MJO season. You can see that bear out in this gif from NOAA:

That’s not to say the MJO is responsible for all of this crazy winter weather. The recent spate of winter storms has in part been driven by the split polar vortex, which trapped a high-pressure system over Greenland and is forcing cold air southward over the U.S. A shifting jet stream is also forming a low-pressure system over the Atlantic, which is what’s causing this upcoming nor’easter (and the one we may be in for early next week). And all this technically spring weather—meteorologists define winter as ending in February.

The MJO, for its part, has already weakened. L’Heureux thinks it may soon disappear, though other models have it continuing to move eastward. Either way, we’re in for plenty more wintry-spring weather in the next couple of weeks. Bundle up.