A Sea Of Plastic 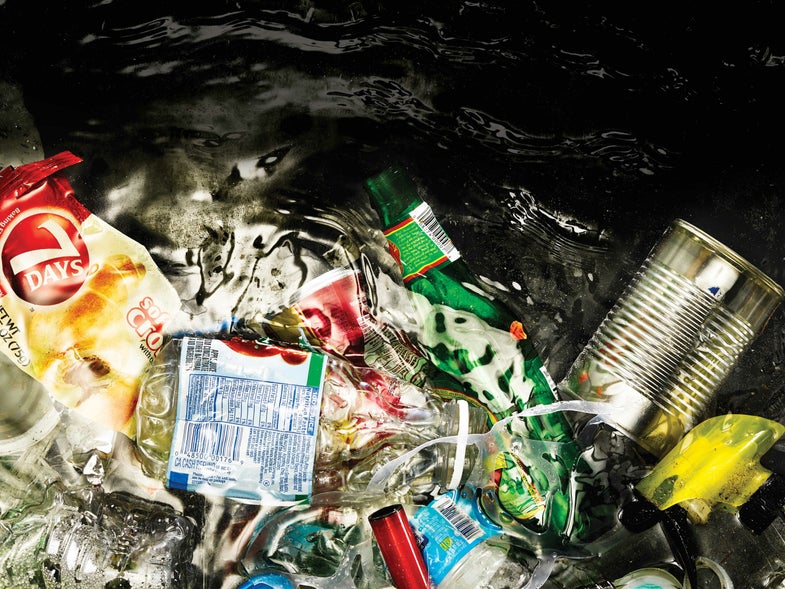 A new garbage patch has been born in the Arctic. Jonathon Kambouris; Prop styling by Linda Keil
SHARE

Last year, a nonprofit organization called The Ocean Cleanup raised $2.2 million dollars toward a project that would remove plastic from an area of the ocean known as the Great Pacific Garbage Patch. Boyan Slat — the group’s 21-year-old founder — plans to use that money to put out about 60 miles of floating barriers, saying he’ll be able to clean up all that plastic trash in about 10 years. But scientists have raised questions about just how feasible — and how successful — Slat’s idea will actually be. Garbage patches, it turns out, are much more difficult to deal with than they might seem at first glance. Currently, there are six main garbage patches, or hot-spots as some scientists prefer to call them, swirling around our oceans. Five of them — North Pacific, North Atlantic, South Pacific, South Atlantic, Indian Ocean — are created by gyres. They form because of winds and currents, as well as the rotation of the earth, pushing water into the middle of the ocean. Where that water converges is known as a gyre and once water reaches the center of the gyre, it begins to sink. But the trash, which largely consists of plastic, remains swirling, trapped neither wholly near the surface or sinking to the ocean floor. “It’s like a turd that just won’t flush,” says Erik Van Sebille, an oceanographer at the Imperial College of London. “That’s why there’s accumulation, and that’s why we get these garbage patches.” Most people know about the North Pacific garbage gyre, which is the garbage patch that Slat hopes to tackle. It’s the biggest and holds the most plastic, holding upwards of 40 percent of the plastic found in all gyres.

The sixth hot-spot is found in the Arctic Ocean and it breaks the mold. It isn’t a gyre; it’s an accumulation zone. Large and small accumulation zones exist all over the planet, and the Arctic accumulation zone is one of the bigger ones. It’s an area where garbage is collecting because, scientists believe, it’s a point in the ocean where water coming up from warmer areas of the ocean sinks back down into the depths as it cools. Adding to the Arctic’s plastics problem is the presence of sea ice. Plastic can freeze in the ice, to be re-released in the spring thaw, allowing for even more accumulation of garbage and making clean-up all the more difficult. And, unlike the five gyres, the garbage in the Arctic poses a much more immediate ecological problem.

When we think about plastic and trash in the ocean, we often think about the harm it does to animals; sea turtles tangled up in soda can rings, fish ingesting tiny pieces of plastic. With that in mind, and from a purely cynical point of view, the trash gyres aren’t as bad as they sound. These gyres form in barren regions, the “deserts of the ocean,” as van Sebille calls them. There are no nutrients there, and almost no animals. Essentially, the water’s been at the surface for so long that all the nutrients have been used up. The swirling plastic mess is actually in the area where it can do the least harm, far away from fishing and coral reefs. That isn’t to say that the trash hasn’t already done damage, but it’s past the point of doing much more.

But the Arctic is a thriving and productive ecosystem. There are myriad species, from sea mammals and birds to fish and crustaceans. Garbage and plastics have a much higher potential to cause damage in these parts of Arctic, an environment that’s already under tremendous pressure from climate change and human activity. With less and less sea ice, there’s been a huge increase in the number of fishing vessels operating in the area. Coupled with increased oil and gas extraction, expanded northern shipping routes and a jump in cruise liners (the port on the northern Arctic island of Svalbard has become increasingly popular), and there are lot more sources for garbage.

Melanie Bergmann, a marine biologist who’s written extensively on marine litter, points out that even the types of clothing people wear in these colder climates can play a role. “People wear fleeces and functional wear, which is primarily made of plastic,” she says. “Every time you wash these garments, you set tiny plastic fibers free. A recent study showed that fleece could lose 1900 fibers of plastic in just one washing.”

Getting all that litter out of the ocean is a big challenge and raises a number of questions: Is it more important (and even possible) to remove that trash from the ocean? What’s the best way to do that? Or should we concentrate on preventing it from getting there in the first place?

The Ocean Cleanup project received high praise for its plan of cleaning up the Great Pacific Garbage Patch, but going after trash in the middle of the ocean may not be the most effective use of resources and money. For one thing, scientists question whether the flotation devices could withstand the constant winds and currents in this part of the ocean. Additionally, there’s the problem of logistics. Even Slat has agreed with the argument that if something breaks on these barriers, trying to get out to the middle of the ocean to fix them would be tremendously expensive.

Rather than focusing on these ocean hot-spots, it might be better to look landward. For a paper he co-authored in January 2016, van Sebille found plastic removal might be more effective if we do it closer to shore, rather than worrying about those trash gyres. “Cleaning up in the middle is like mopping up a leaking tap without fixing the tap itself,” he points out. “It’s much better to do it as close to the source as possible, before it has a chance to interact with marine life.”

When talking about clean-up, the idea of preventing trash from even reaching the ocean becomes even more important when comparing the small amounts of the trash floating around in the gyres and hot-spots to the enormous amounts that are everywhere else. Scientists know that there’s a lot of plastic in the ocean, but they don’t know how much. “If you measure how much plastic is out there, floating around in the ocean,” says van Sebille, “it’s anywhere within a few hundred thousand metric tons.” But then he referred to another scientific paper, from just last year, that estimated somewhere between 4.8 and 12.7 metric tons actually gets into the ocean every single year.

In other words, there’s one hundred times more plastic getting into the ocean every year than there is floating at the surface. “Ninety-nine percent of our plastic is missing,” van Sebille says. “We know how much goes in, we know how much is on surface, where’s the rest? That’s the million dollar question.”

Most scientists agree that there are only a few places where it could have gone — down to the seafloor, washed up on beaches or in animals. “We know that seabirds have a lot of plastic in their stomachs; so do turtles. We know that there’s a sink of plastic into animals.”

Looking at the big picture, Van Sebille thinks cleaning up pollution after the fact isn’t the most efficient or effective way of dealing with the problem. In his opinion, the best first step is to get people to be more careful with their garbage and to think about recycling.

Melanie Bergman tends to agree that the only effective way of keeping plastic out of the ocean for the long-term is to stop it from getting there in the first place. “I don’t think there’s a way to clean it up,” she says. “The only solutions are to avoid litter in the first place, reduce the consumption or usage of plastic, and to develop products that have the same lifetime as whatever it is they contain.” She muses on the possibility of polymers that quickly degrade when they come in contact with seawater. “Humankind is so clever — why can’t this be possible?” she asks.

Humankind is already working on potential solutions. A growing number of US-based and international companies produce what are called sustainable plastics or bioplastics — plastics made from plants like corn, potatoes or sugar cane. Consumers most commonly find them in cups, bottles, cutlery and bags and, as awareness of the plastics problem has grown, demand for these eco-friendly products continues to rise. It’s a good sign; people are finally concerned. Marketing experts believe that the global market for bioplastics could be worth as much as $30.8 billion by 2020. However, despite their green, earth-friendly appearance, many bioplastics have problems: they can still take an extremely long time to decompose or can only be broken down properly in industrial composting facilities.

But in New York, entrepreneurs Eben Bayer and Gavin McIntyre are close to ten years into the process of building better trash. “The reality is that even the best intentioned humans will litter on occasion,” says Bayer. “Human goods always find their way out of recycling and waste collection systems and these materials are carried by water and wind towards our oceans. The garbage patches are visceral evidence of this phenomenon. Our philosophy is that materials that are sold to the consumer, from packaging to durable goods, should be 100 percent compatible with the earth’s ecosystem.”

So Bayer and McIntyre founded a biomaterials company called Ecovative and took on the project of developing a substitute for what could be considered one of the environment’s worst enemies: polystyrene, better known as Styrofoam. As a lightweight packing material, Styrofoam is ubiquitous because it is top-notch and dirt cheap. But its environmental legacy is terrible. It’s the biggest source of urban litter, and the main pollutant of oceans and bays in the US. It causes choking and starvation in wildlife. It takes at least 500 years to decompose. And it’s carcinogenic to boot.

As a replacement, they’ve created an alternative made of mycelium, or mushroom roots. They cultivate the fungi using agricultural waste, such as corn stalks, and put it in a mold that’s shaped like a piece of packing material, like the corners that come around a new TV or an appliance. After just a few days, the mycelium has grown into the shape of the mold. It’s as effective as Styrofoam but once exposed to moisture, it decomposes. It won’t “dissolve” immediately, explains Bayer, but over time it will break down into actual nutrients that can be used within the food chain (rather than tiny plastic particles).

Bayer sees changing the types of products we use and dispose of as the best bet for addressing the problem of plastic in the ocean. “This is the only practical way to ensure these materials don’t find their way into our environment,” he points out. “It is extremely hard to clean up any pollution once it occurs. Folks hear ‘Pacific Garbage Patch’ and think it’s some concentrated area. It actually stretches over hundreds of miles and is very diffuse. The material that is out there is certainly an issue, but the bigger problem is, what will our oceans looks like in 25 or 50 years if we continue like this? Our beaches will have plastic trash, not kelp, lining the edges, and our marine life, animals, and birds, will pay a heavy price.”

A version of this article was originally published in the September/October 2016 issue of Popular Science, under the title “Trash Reaches Arctic Waters.”