The ESO’s Very Large Telescope, with help from NASA’s Chandra X-ray Observatory, has found the most powerful pair of jets... 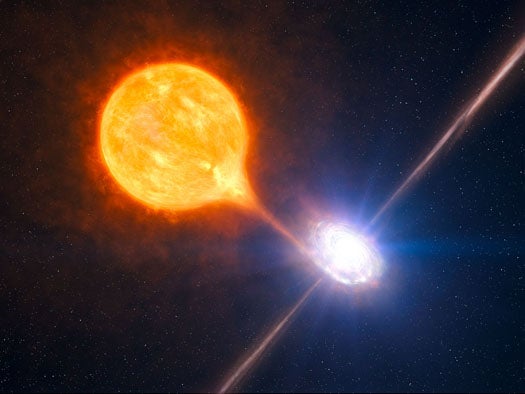 The ESO’s Very Large Telescope, with help from NASA’s Chandra X-ray Observatory, has found the most powerful pair of jets ever witnessed ejecting from a small, stellar-sized black hole. But while the black hole (by black hole standards, anyhow) is small enough to be classified a microquasar, the jets are anything but tiny, sufficiently powerful to spawn a giant, fiery gas bubble 1,000 light years across.

The gas bubble is twice as large and tens of times more intense than gas bubbles associated with other microquasars. The gas bubble feeds on the collimated jets emanating from the black hole, which pump fast moving particles into the interstellar gas surrounding the black hole. As that gas heats up and expands, the bubble inflates at a rate of nearly 621,000 miles per hour.

On a cosmic scale, those numbers may not seem so exciting, but it’s the relative size of the black hole that’s so astonishing. Robert Soria, one of the co-authors of the Nature article reporting the discovery, puts it into perspective: “If the black hole were shrunk to the size of a soccer ball, each jet would extend from the Earth to beyond the orbit of Pluto.”

Judging from the size of the bubble, researchers determined that the hot jet activity must have been going on for at least 200,000 years. But at 12 million light years away, this bright, white-hot ball of gas is tougher to get a good look at then one might think. Lucky for you, you can get a high-res look at the above pic, courtesy of the European Southern Observatory, via the link below.