Yesterday saw the discovery of an extremely massive, extremely bright star in a neighboring galaxy. Today NASA says Hubble has... 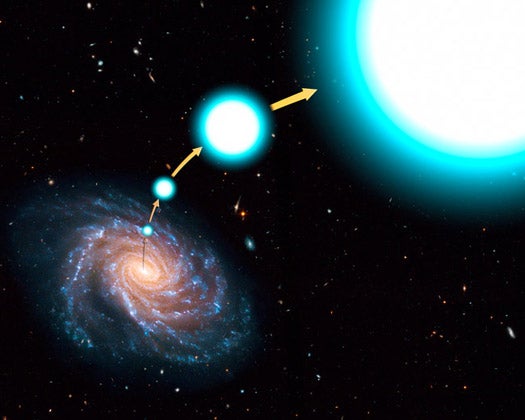 Yesterday saw the discovery of an extremely massive, extremely bright star in a neighboring galaxy. Today NASA says Hubble has discovered a fast-moving star that’s much closer – but getting further away at a very rapid rate. The hypervelocity star being expelled from the center of the Milky Way is traveling away from our galaxy at 1.6 million miles per hour, three times faster than our own sun’s orbital velocity in the Milky Way.

How did it get moving so fast? The explanation likely includes a stellar ménage a trois gone horribly wrong some 100 million years ago. A three-star system likely wandered too close to the center of the galaxy and lost one of its members to the black hole that resides there. The momentum of the captured star – and keep in mind, near the center of the galaxy things are really moving – was transferred to the remaining two, bumping them up to warp speed and throwing them violently outward from the center. As they jetted away at high speed, the larger of the two absorbed the other, creating the large, very speedy blue straggler we see today.

Initially there was some uncertainty over the star’s origins; its distance from the center of the Milky Way (it’s now cruising some 200,000 light years out) suggests it must be 100 million years old. But its mass, nine times that of the sun, and the fact that it’s a blue star indicates that it should have only lived 20 million years.

Hubble’s ability to measure the star’s trajectory confirms its origins at the center of the Milky Way, which means given its color and distance it must be a blue straggler – a star spawned from the merger of two smaller stars. Following the speeding star on its travels could lend researchers some insight into how galaxies form as well as how dark matter influences bodies moving through space outside the Milky Way.