Hubble Shoots a Spooky Snapshot of a Faraway Haunted Nebula

This spooky image of a tiny nebula known as IRAS 05437+2502 was recently released by the Hubble Space Telescope, but... 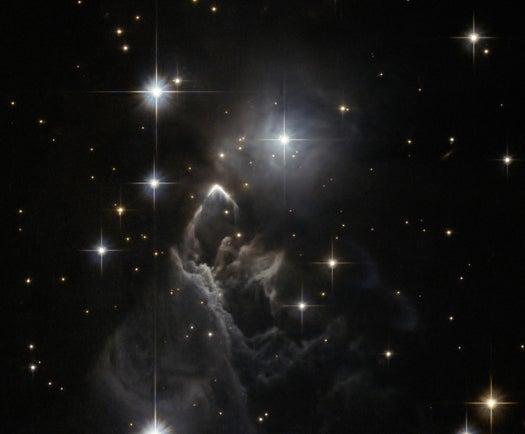 This spooky image of a tiny nebula known as IRAS 05437+2502 was recently released by the Hubble Space Telescope, but perhaps even more eerie than the wispy, ghost-like appearance of the little-studied star forming region is the boomerang-like light crowning the nebula. Though the Infrared Astronomical Satellite (IRAS) first discovered the nebula in 1983, astronomers have no clue what is lighting up this glowing object.

Captured by the Wide Field Channel of Hubble’s Advanced Camera for Surveys, the image actually contains a relatively narrow field of view as the nebula itself isn’t very big. Not much is known about it outside of the fact that it’s in the constellation Taurus and it wears a mysterious glowing hat atop its head. One hypothesis suggests a massive star that since accelerated to a high velocity and departed the nebula spawned the glowing matter long ago, though there’s no evidence to speak of to confirm or deny that theory.

The air of mystery surrounding such a stunning image is all right by us. Get a higher-res image for your desktop here.