It’s been a great day for interplanetary H2O. First we hear that Mars was once covered in a massive, deep... 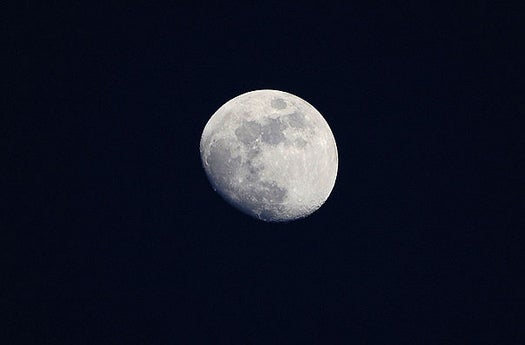 It’s been a great day for interplanetary H2O. First we hear that Mars was once covered in a massive, deep ocean. Now scientists at the Carnegie Institution’s Geophysical Laboratory are reporting that the moon may harbor 100 times more water than previously thought.

Taking a fresh look at rocks collected from the lunar surface during the Apollo missions, the researchers found that the minimum water content on the moon after its formation likely ranged between 64 parts per billion to 5 parts per million, at least two orders of magnitude higher than originally thought. It also suggests that the water is native to the moon, having been part of the original magma that formed the moon after its mass was, supposedly, sheared from earth in a violent collision.

The researchers had suspected this might be true all along based on earlier models and calculations they’d performed, but at that point they didn’t have access to actual moon rocks. For their newest study, they were able to compare Apollo moon rocks and a lunar meteorite from Africa to their calculations. Using secondary ion mass spectrometry, the team was able to analyze the mineral apatite within the lunar rocks for traces of hydroxyl, a compound known to be present in apatite when the mineral cools from magma containing water.

After identifying and analyzing the apatite, the team found that the numbers from their analysis matched the numbers in their earlier, theoretical calculations almost perfectly, suggesting the models are correct. That means the moon is a lot wetter than we previously thought it was, though it’s still obviously not as wet as the Earth or even Mars. But the findings could change the way scientists think about the formation of the moon, about lunar magma, and, eventually, about the technological feasibility of life forms living on the lunar surface.