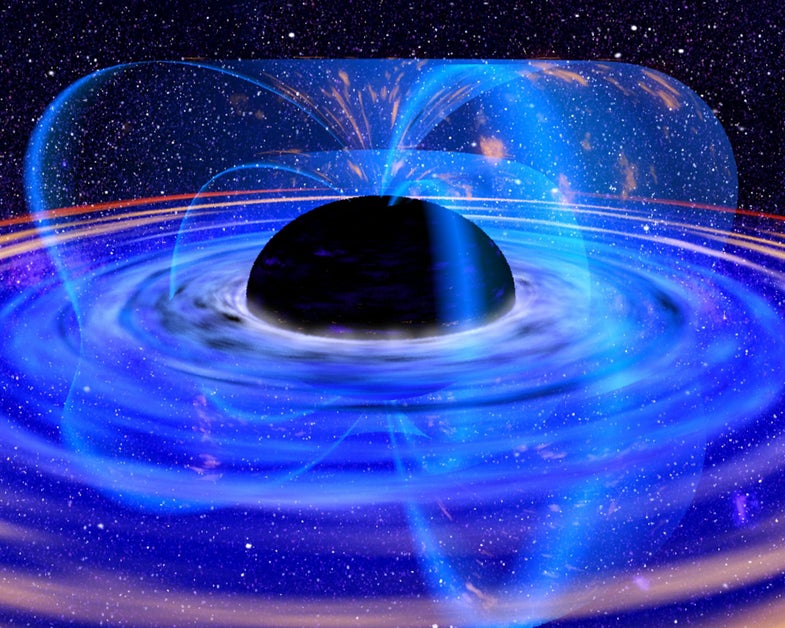 A supermassive black hole lurks at the center of our galaxy, but we’ve never seen it. We know it’s there, and that it has the mass of about 4 million suns, and that the stars in our galaxy revolve around it. But no one could tell you exactly what it looks like.

In fact, astronomers have never been able to snap a direct image of any black hole, ever. That’s because although the black holes at the center of galaxies are supermassive, they’re really far away. It’s akin to trying see a grapefruit, DVD, or bagel on the surface of the moon. You’d need a supermassive telescope, 1000 times the size of Hubble, to spot one.

Or, maybe, just eight telescopes working together. The Event Horizon Telescope (EHT), which is actually a network of eight radiofrequency observatories around the world, switched on for the first time on April 5. Between now and April 14, the observatories hope to gather enough data to piece together our first snapshot a black hole’s event horizon—the “point of no return” threshold after which nothing can escape the black hole’s gravity.

These telescopes will collect radio waves emitting from the supermassive black hole at the center of the Milky Way, as well as the neighboring galaxy Messier 87, and stitch them together into visual images. The EHT’s resolution is said to be about as good as being able to count the stitches on a baseball from 8,000 miles away.

Over at Nature, Davide Castelvecchi explains that instead of using just one very big mirror or antenna dish, the technique (called very-long-baseline interferometry) works by merging multiple observatories into “one virtual telescope—with an effective aperture as big as the distance between them.”

Heino Falcke, an astrophysicist at Radboud University in the Netherlands, told Popular Science that this project wouldn’t have been possible just a few years ago. The Atacama Large Millimeter Array, which has been fully operational since 2013, “adds a lot of sensitivity and image quality,” he says. “Also, we need to record and store an enormous amount of data—almost half a petabyte per telescope. That wasn’t feasible a few years ago.”

EHT’s goal isn’t just to see what our friendly neighborhood black hole is up to. The team, lead by astrophysicist Sheperd Doeleman at Harvard University, thinks that “seeing” a black hole for the first time could help lead to a theory of everything, uniting the laws that govern very small quantum mechanical physics with the laws that govern very big things in the universe.

The project also aims to learn more about how these gravitational anomalies pull in matter, and how they generate huge jets of plasma. It could also shed light on Stephen Hawking’s hypothesis that information that falls into a black hole must somehow leak back out.

After analyzing the vast amounts of data that will be generated by this experiment—about 2 petabytes for each of the four or five nights of observation—the EHT team hopes to have a picture ready in 2018.