IBM Researchers Create the Most Detailed Brain Map Yet

A significant stride towards reverse-engineering the darn thing 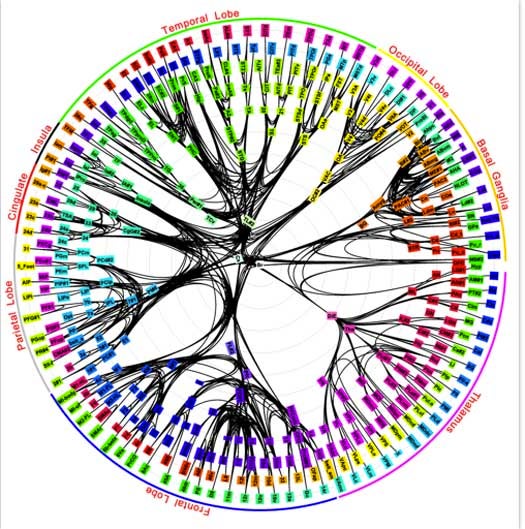 The highways and byways connecting the various regions of a Macaque monkey's brain. PNAS
SHARE

Researchers at IBM have created the most complex neurological map ever seen, detailing the comprehensive long-distance network that makes up the macaque monkey brain in unprecedented detail. Such a roadmap through the brain’s complex networking processes could have major implications for attempts at reverse-engineering neural networks and creating cognitive computer chips that “think” as powerfully and efficiently as the biological brain.

Focusing on a long-distance network connecting 383 brain regions and 6,602 long-distance connections that function like highways to connect disparate regions of the brain. Shorter, more localized connections were found to carry signals within regions.

But most importantly, they found what they describe in a paper published in PNAS as a “tightly integrated core” that might be they key to cognition in higher-thinking biological creatures. That core might be what gives us consciousness (we won’t get into the philosophical implications there). Further, the core isn’t located in one, or even two regions. The researchers found it stretches through the premotor cortex, prefrontal cortex, temporal lobe, thalamus, visual cortex and a handful of other regions.

Another surprising find: the prefrontal cortex, though at the front of the brain, might actually serve as its central information hub that distributes information throughout the brain.

The study included mapping of four times as many regions and three times the number of connections than the largest previous attempt. Those findings could finally help researchers mimic the brain — which, even in this seemingly advanced era, is something of a mystery to us. That in turn could lead to network architecture and computer chips that process and move information as quickly and seamlessly as our brains do.