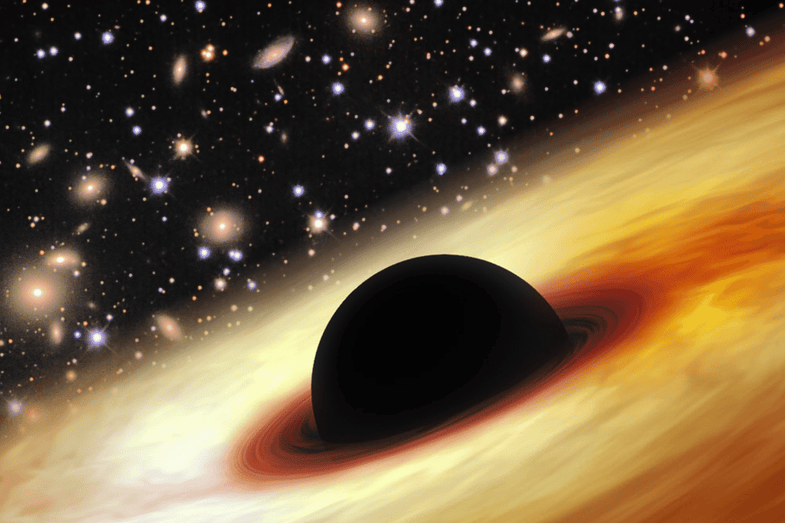 Deep within the early universe, there lies a gigantic black hole in the midst of an extremely luminous disc. This space-time warp is so gigantic, it’s estimated to be 12 billion times more massive than our own Sun. That makes it one of the most massive deep-space black holes ever recorded.

Researchers from Peking University recently discovered this monster using data from the Sloan Digital Sky Survey, the Two Micron All-Sky Survey, and the Wide-field Infrared Survey Explorer. To measure its size, the team analyzed the luminosity surrounding the supermassive black hole. With their immense gravity, black holes are constantly sucking in gas and other materials from nearby. This process heats up the gas so much that it emits intense energy and thermal radiation that’s unbelievably bright.

This luminous energy is known as a quasar, and it can hold many clues about the black hole harboring within. “Using spectroscopy we can detect the emission of light surrounding black holes, then we can use the properties of this gas and the distance of this gas to estimate the mass of the black hole,” Xue-Bing Wu, the lead researcher on the Nature study, tells Popular Science.

Not only is this one of the biggest supermassive black holes ever found, it is perhaps the largest one discovered in the early universe. This black hole-quasar combo is estimated to exist 12.8 billion light years away (so there’s no chance it will swallow the Earth, in case you were worried). The light we’re seeing from it is from 900 million years after the Big Bang, which happened 13.8 billion years ago. Meaning that this black hole was gigantic even when it was relatively new.

Its immense mass comes at a bit of a surprise. It means the black hole must have been growing constantly at a very high rate just after the Big Bang happened—and that kind of growth is considered pretty rare. “People assume there’s a fast growth rate for these black holes, but the energy released by the black hole will often stop the flow of new material. Therefore it doesn’t grow that fast over the course of its lifetime,” says Bram Venemans, an astronomer at the Max Planck Institute, who wrote a commentary on the research. “But this black hole must have grown close to a maximum rate for most of its lifetime without the growth being stopped by energy output.”

“It’s still in the limits of what’s possible,” Venemans added, “it’s just surprising that it happened so efficiently over such a long time.”

Correction (2/25/2015): The original story misstated the distance of the black hole from Earth. It is 12.8 billion light years away, not miles. Our bad!