NASA’s Curiosity Mars Rover Gets New Steering System, Will be First Rover to Land Directly on its Wheels

The next Mars rover, Curiosity, has been outfitted with a new cutting-edge mobility system that’s enough to make off-road enthusiasts... 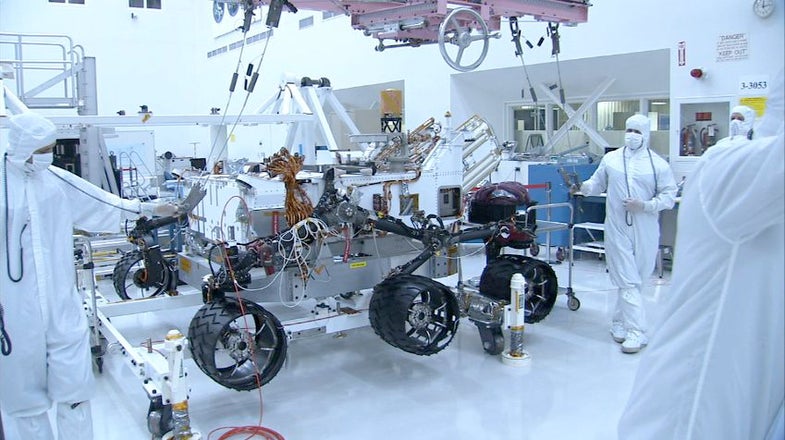 The next Mars rover, Curiosity, has been outfitted with a new cutting-edge mobility system that’s enough to make off-road enthusiasts drool with envy. The rover, which will carry ten times the payload mass of Spirit and Opportunity, is about the size of an SUV, and too heavy for an airbag landing.

It has a set of six wheels that are 20 inches in diameter — larger than a car tire. Each wheel has its own motor, giving the rover independent six-wheel drive, and “cleats” that provide grip and help keep the rover from slipping when climbing over rocks or sand hills. The rover can also do swerving maneuvers and turn in place a full 360 degrees.

Like the Spirit and Opportunity rovers, Curiosity will have a “rocker-bogie” suspension system, which keeps it from tipping over when rolling over large rocks or hitting dips in the Martian terrain. But unlike the earlier rovers, Curiosity will use its wheels as landing gear when a rocket-powered descent lowers it directly onto the Martian surface via a tether in August 2012. When Spirit and Opportunity touched down on Mars in January 2004, they were cushioned from the bumpy landing by the airbags that held them. But despite the protection, airbag landings introduce additional risks during the egress phase — the period of time between the actual landing and driving the rover off the lander onto the Martian surface. Egress involves a series of tactical moves and steps, so the flight team must give the rover commands and assess the resulting data before proceeding with the next step.

Curiosity will be slowed by a large parachute after its descent through the Martian atmosphere, as were Viking, Pathfinder, and the Mars Exploration Rovers. Rockets will then control the craft’s descent until the rover separates from a “sky crane,” which will lower the rover to a soft landing — wheels down — on the surface. The precision landing will put Curiosity down within a precise 12-mile ellipse, whereas Spirit and Opportunity could have landed anywhere within a 93-mile-long ellipse.

As the primary component of NASA’s Mars Science Laboratory mission, Curiosity will land in a location where water-related minerals have been detected by Mars orbiters. The rover’s 10 science instruments will then examine the site for clues of modern or ancient habitable environments. The scheduled launch window is between November 25 and December 18, 2011.