At a cocktail convention, McGee and other experts unleash a cutting-edge arsenal of handy science 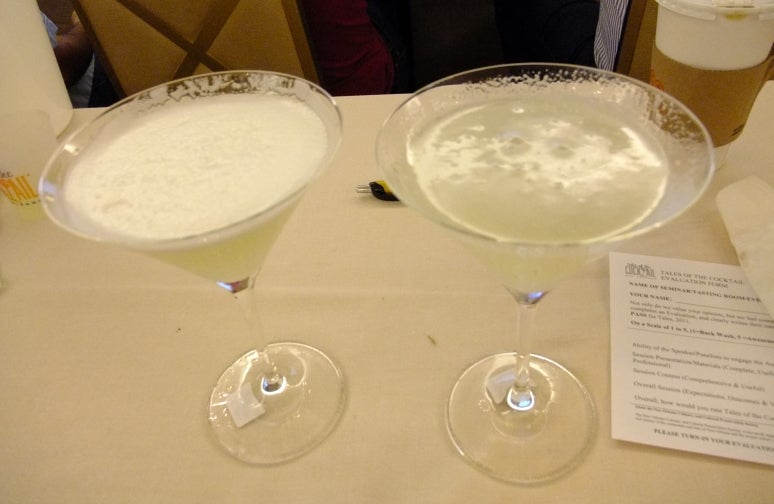 The drink on the left was shaken with egg white; the one on the right with gelatin. The two were equally frothy just a moment before the photo was taken. Paul Adams
SHARE

The annual Tales of the Cocktail convention happened again in New Orleans last week, I seem to recall. And somewhere between the sazeracs and the rusty nails, I attended a series of enlightening seminars (each accompanied by appropriate cocktails, of course).

Harold McGee, author of On Food and Cooking and probably the most famous name in food science, was present at Tales for the first time, to lend his expertise to a deserving cocktail world. He sat on a panel with Audrey Saunders, celebrated owner of New York’s Pegu Club, and Tony Conigliaro, who pushes the frontiers of molecular mixology at London’s 69 Colebrooke Row.

Over the course of 90 minutes, during which Pegu’s head bartender Kenta Goto mixed illustrative drinks for the audience, the trio of experts dropped some fascinating and useful tidbits of cocktail science. Here are some highlights.

When shaking up a drink that you want frothy, egg white is your friend, since its proteins bond together permanently to give structure to a foam. Gelatin, the protein more commonly used in culinary foams, tends to melt after a while, since its protein bonds only temporarily. Shake the egg white at room temperature first, since it foams better warmer; then chill the drink. A shaker made of silver produces a softer, more delicate foam because of the metal’s interaction with the egg.

Get the Best Mint Flavor

McGee revealed that mint, and other plants in the same botanical family, such as basil, store their delicious aromatic compounds in little hairs and organs on the bottom surface of their leaves. If you crush the entire leaf, you’ll extract the generic grassy flavors from inside the leaf as well as the minty taste you’re after. A better approach is to just gently muddle or abrade the surfaces of the leaves, without rupturing their whole structure.

To make a champagne cocktail, as we all know, you put a sugar cube at the bottom of a champagne flute, shake a few dashes of Angostura bitters onto the cube, then fill the glass with chilled champagne. Unfortunately, as Goto demonstrated, bitters is full of small molecules, such as lecithin, which cause the champagne’s foam to strengthen and grow, so pouring fizz onto bitters can be a messy proposition, releasing too much CO2 from the drink too soon. Instead, Saunders suggests, fill the flute first, then gently gently add a bitters-saturated sugar cube and serve.

Make the Most of Hidden Flavor

McGee cited some useful information for cocktail inventors about how the brain perceives flavor. For one thing, if there’s sugar present in a cocktail, the brain will find the drink more aromatic than an identical drink with less sugar. That’s an evolutionary adaptation, he theorizes: we are much more interested in items that provide more life-giving calories.

Also, in strong drinks (above 20 percent alcohol), the concentrated ethanol can form large clusters, or micelles, that are dispersed in the water phase. Aroma molecules can hide inside these clusters, becoming trapped, and thus make the drink seem less aromatic and flavorful to the drinker. Diluting the drink helps the alcohol clusters break up, freeing the tasty aroma molecules. (In the Times this week, McGee writes about other instances of diluting for flavor.) Chilling the drink also makes the alcohol more soluble in water, and likewise frees trapped aromatics. That’s why putting a couple of ice cubes in a glass of neat whisky does so much for the drink’s taste.

Finally, Tony Conigliaro demonstrated a little trick he’s been doing for a few years: mixing cocktails, putting them in bottles, and sticking them in a cool cellar for six months or more. (At this point, Kenta Goto obligingly poured out a round of Cuban rum cocktails thus aged.) The drink had a magnificent round, integrated flavor, although it would have been interesting to taste an unaged sample for comparison.

When spirits age in wooden casks, the majority of the changes that take place are due to the liquor’s complex interaction with the wood, which gives it color and flavor. But when drinks are aged in glass bottles, they don’t interact with the inert container. So what’s happening? McGee explained that, left to its own devices, a spirit will age regardless: sulfur compounds in the drink oxidize, and alcohols, acids, and aldehydes react together, losing their harsh edges and producing aromatic esters.

After the McGee seminar, PopSci fave Dave Arnold took the stage for his own seminar, The Science of Stirring, which was nothing more nor less than a detailed analysis of how stirring a drink with ice compares to shaking it (last year he taught The Science of Shaking). Six skilled stirrers (including McGee, who volunteered from the audience) stood on the stage, mixing drinks in vessels Arnold had fitted with thermocouples, while the six drinks’ temperatures were plotted live on a giant projection screen.

The liquid nitrogen was brought out at some point as well, to demonstrate that there is indeed such a thing as a cocktail that’s too cold. And that was just one morning of the week-long conference. We’re lucky we survived. 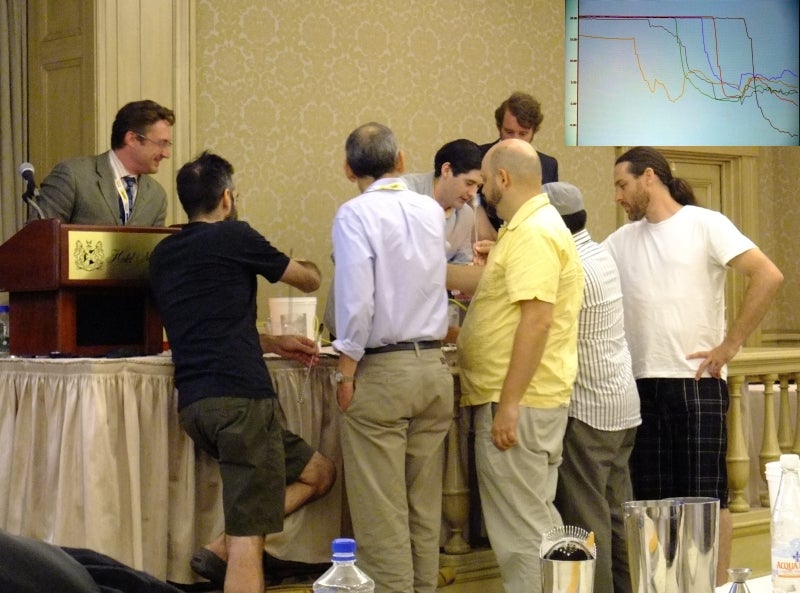 The Science of Stirring