Could A Black Hole Be Blocking The Light From That ‘Alien Megastructure’ Star?

The top 7 explanations for the star’s weird behavior, ranked roughly in order of plausibility About 1480 light-years away from Earth, a star is doing something astronomers have never seen before. Every now and then, at random intervals, its light dips by as much as 22 percent. That’s way too much to be a planet. And the star (officially named KIC 8462852, but informally called “Tabby’s Star” or “Boyajian’s Star”) seems to have gotten dramatically darker over the past century.

This odd behavior defies all known explanations, and astronomer Jason Wright has pointed out that these light patterns are similar to what we might expect if aliens built a complex of machines around the star to harvest its energy. But even Wright admits it’s much more likely there’s a natural explanation. In September, he and coauthor Steinn Sigurd̵sson rounded up and analyzed some of the most common explanations.

Wright has been been fleshing out those analyses in a series of posts on his blog.

We’ve rounded up our favorite explanations here, in rough order from least likely to most plausible.

Did Kepler mess up? Nope.

The data checks out. When the Kepler telescope detected the huge light dips from KIC 8462852, nothing was wonky in the telescope, and there’s nothing particularly odd about any of the other data it collected at the same time.

It’s not possible that the telescope pixels that imaged Boyajian’s Star were faulty, because the star’s image wasn’t always on the same pixels. As the star moved throughout the month, and as the telescope shifted positions, different detectors monitored Boyajian’s Star, and they all showed that the star was acting bizarre. “The dips are real,” writes Wright.

For a few months, scientists argued about whether the star has been getting dimmer over the past century. Those observations were based on old and imprecise astronomy data. But a new analysis indicates the star dimmed significantly over the four years that the Kepler telescope watched it, and therefore probably over the past century as well.

Could a black hole eat up the light? Nope.

Despite the popular image of a black hole gobbling up everything in its path, including light, black holes could not be responsible for darkening Boyajian’s Star.

Wright explained to Popular Science that if a black hole were sitting close to Boyajian’s Star, its massive gravity would make the star wobble, which scientists would be able to observe from Earth. It doesn’t wobble. Plus, if it were sucking material off of the star, the stuff falling into the black hole would actually give off bright light and extra xrays, which scientists don’t see.

But what if a black hole were sitting farther away from Boyajian’s Star, between the star and Earth? Still no. Counter intuitively, the black hole would act like a lens, actually brightening the light we would see from Earth.

Could it be a sunspot? Unlikely.

Spots on our sun do cause tiny drops in brightness, but we’re talking about a few tenths of a percent. To cause a huge dip in KIC 8462852’s light levels, on the order of 20 percent, the starspots would need to be “10–100 times larger than the strongest effects known in other stars,” Wright noted in his blog post. Plus Boyajian’s Star is spinning rapidly, so the dips caused by those starspots would appear and disappear every day, instead of lasting for days.

But what if the spots were on the poles of the spinning star, and the pole is constantly pointed at us? That still seems pretty unlikely, says Wright, given the fact that Boyajian’s Star is a type of star that doesn’t usually have big spots.

Comets? Maybe, but probably not.

Comets are actually the explanation favored by Tabetha Boyajian, the star’s discoverer. The idea is that a family of extra-large comets may be jumbled up in the star’s orbit, blocking its light in irregular ways.

If the comets are there, they must be pretty far away from the star, otherwise astronomers would be able to see extra heat coming off of them. The lack of extra heat rules out pretty much every potential explanation that relies on something big being in orbit around the star. 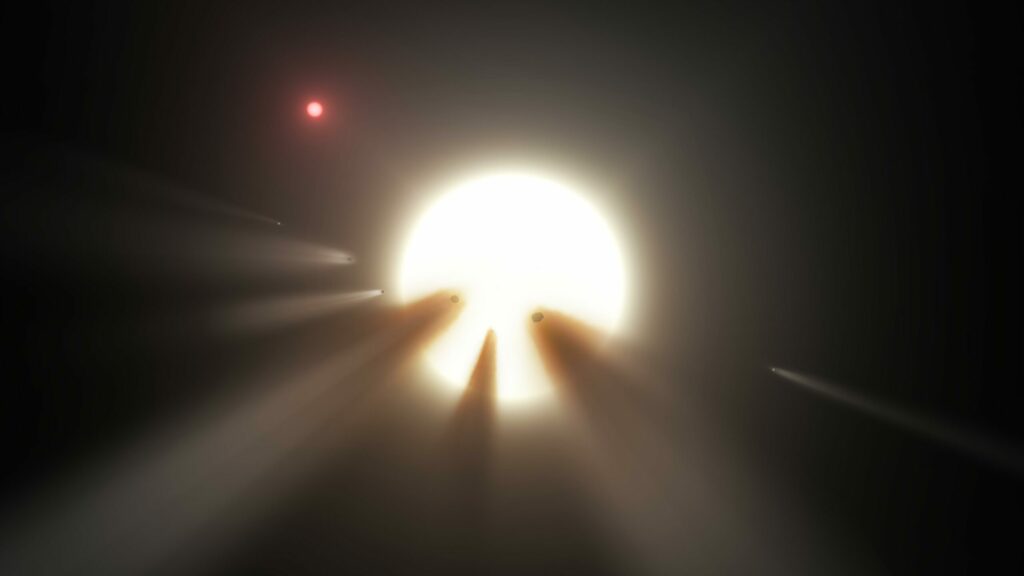 A disk of material orbiting a black hole is one possible explanation. (Debris disks also orbit stars and planets, but since astronomers don’t see anything like that, this object would have to be dark … such as a black hole.)

For this hypothesis to work, the disk of material clotting around the black hole would have to be huge–something on the order of 600 times the distance between the Earth and the Sun–in order to block the star’s light for such long periods of time, despite the star’s monthly movements.

Wright says that although we’ve never seen a black hole disk that big, it’s not ruled out by physics. If there is a large disk there, scientists might confirm this hypothesis if the debris passes in front of neighboring stars.

The space between stars is filled with gas, dust, as well as filaments and sheets of material clumped together by gravity. It’s possible that a particularly dense part of this interstellar medium got caught between us and Boyajian’s Star, absorbing some of its light.

To create the huge light dips, these filaments or sheets would need to be about 1000 times smaller and denser than we think they are, but it’s not impossible, says Wright. Maybe structures like that are just so small and rare that we’ve never spotted anything like it before now.

Dark nebulae known as Bok globules could also be to blame. These black, star-forming clouds of dust and gas have been known to blot out stars before. Perhaps as turbulent gas and dust swirls around inside the globule, dense patches form and dim the light we see from Boyajian’s Star.

“It would be kind of unusual to see one of these clouds in this part of the sky,” says Wright, but it’s not impossible.

Both phenomena–the interstellar sheets and dark nebulae–would be expected to darken our view of the stars that neighbor Boyajian’s Star. Trouble is, the nearby stars are faint, which makes it difficult to measure their brightness precisely, so astronomers aren’t sure whether or not that’s happening.

The hypothesis that aliens are building a megastructure around the star to harvest its energy runs into the same problem the comets did: any object in orbit around the star should absorb light and re-emit it as excess heat, but astronomers aren’t detecting excess heat. 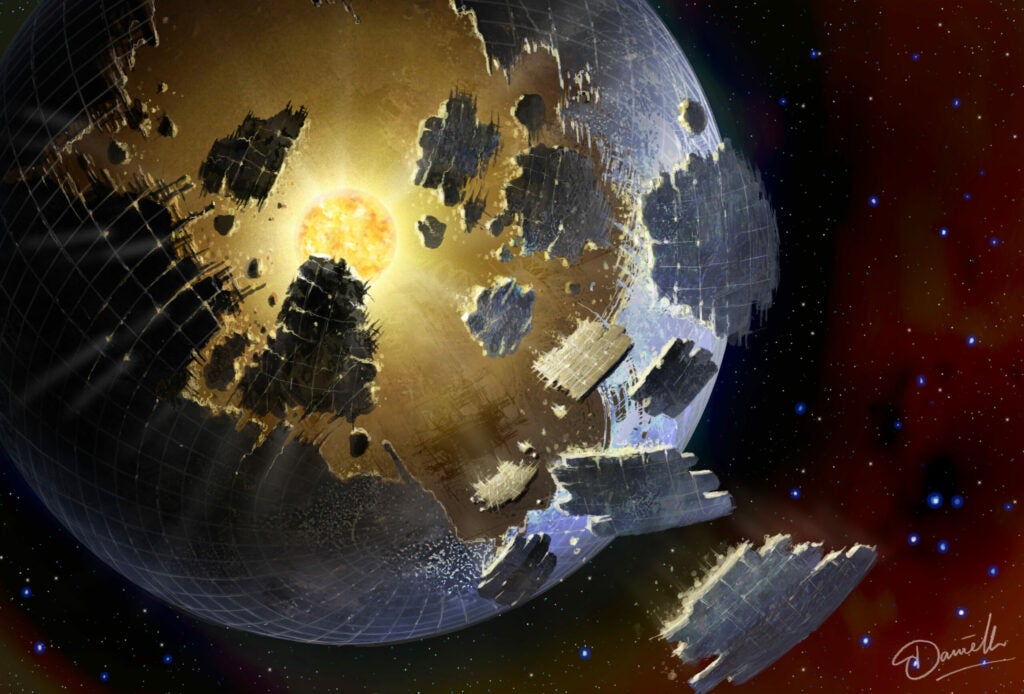 Illustration of a Dyson sphere around a star

But who knows, maybe an alien civilization capable of building star-sized structures has also figured out how to utilize all of the sun’s energy, including heat. That’s the problem with alien-related hypotheses–there’s no good way to disprove them, since we don’t know what such a civilization would be like or what they’d be capable of. It’s also impossible to calculate the odds of intelligent alien life out there in the cosmos, so it’s kind of tough to say how this hypothesis stacks up to the rest. However, we know interstellar material exists, and we don’t know whether aliens exist, so our money would be on the natural (non-alien) hypotheses.

Wright has been careful to point out that aliens should always be a last resort hypothesis, after everything else has been ruled out. Nevertheless, he and Boyajian and other scientists are investigating Boyajian’s Star using the most thorough alien-hunting equipment available.

Meanwhile, all manner of telescopes have turned their attention to Boyajian’s Star, from the Swift Observatory to the Spitzer space telescope to the backyard spyglasses of amateur astronomers. They are monitoring the star in optical, infrared, UV, and x ray spectrums. The next time something weird happens around Boyajian’s Star, scientists around the world will be ready to collect as much data as possible, to help settle the question of what the heck is going on around this star.