This star is orbiting insanely close to a black hole

But they get along just fine 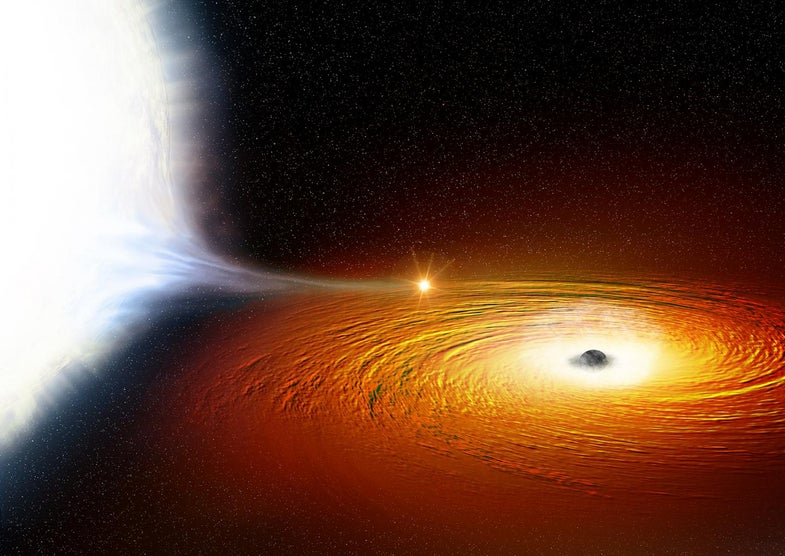 Harry and Sally. Tristan and Isolde. Chip and Dale. Iconic duos, each of them. But they ain’t got nothing on X9.

Located in the dense globular cluster of stars known as 47 Tucanae—about 14,800 light years from Earth—this binary system was long thought to consist of a pair of stars: a star about the size of our sun locked in orbit around a planet-sized, super-dense white dwarf that slowly sucked matter from the larger star. But it turns out that the sunlike star is probably a white dwarf, and the presumed white dwarf is actually a black hole.

This marks the first time scientists have found such a tiny star in this sort of binary system with black hole. And there’s more: the dwarf whips around the black hole once every 28 minutes. That’s the closest orbit scientists have ever observed in any black hole and star pair.

“We suspect they’ve been like this for millions or billions of years,” says Arash Bahramian of the University of Alberta in Canada and Michigan State University. Bahramian is the first author of a new study on the system published in Monthly Notices of the Royal Astronomical Society. “And our current understanding is that the system is stable. It can probably stay this way for millions of years more.”

But while the white dwarf doesn’t seem to be in danger of being totally dragged into the black hole—or being torn apart from a distance—it is supplying its partner with a steady diet of gas and dust. Astronomers have never seen a black hole successfully feeding off of such a tiny star, but X9’s incredibly tight orbit—the pair are probably about 2.5 times farther apart than the Earth and the moon are—makes this vampirism possible.

Even if X9 didn’t have the distinction of being the tightest knit and most white-dwarf-iest binary system of its kind, Bahramian and his colleagues would still be thrilled to find it: It’s not too rare to find stars in orbit around black holes, but it’s very uncommon to find such pairs in dense, old globular star clusters like 47 Tucanae. And all the evidence suggest that loads of these interactions should exist there—or should have existed at one point. The clusters should be full of black holes formed by massive, imploding dead stars, and the heavy stellar traffic should make for plenty of intriguing interactions in the neighborhood.

“Although we expect a lot of these systems in globular clusters, we have found a surprisingly low number of them,” Bahramian says. “Until a couple years ago, this number was zero. We thought perhaps that there were none left to see today—that perhaps black holes gained a lot of speed because of interactions with clusters and got kicked out, that they left the clusters rapidly after forming. But then evidence suggested some should have survived until today.”

In the past decade or so, astronomers finally started to find these systems—but they’ve still only found “a handful,” according to Bahramian. “And now this is one of them.”

Studying systems like these could help scientists understand the evolution of black holes, stars, and globular clusters. In this case, Bahramian and his colleagues suspect that X9 was once, in fact, what astronomers long suspected it to be: a pair of stars, the smaller of which was obliterated by the black hole, leaving the white dwarf—a small star in the last stage of its life—in orbit around a dark companion. It’s also possible that the star was once a red giant (a dying star big and hot with gas, that will eventually collapse onto itself and form a white dwarf) that got a clobbering from the black hole. Their collision could have allowed the black hole to strip the red giant of its gases, sending it into the white dwarf stage of its life prematurely.

We could theoretically learn more about this system using gravitational waves. These ripples in spacetime are cast off in all directions by every object in existence, but massive things like black holes give off signals we have some hope of detecting. Because gravitational waves don’t degrade or interact with matter as they travel, we could get a read on objects like black holes that are too small, distant, and dark to see by other means. Unfortunately, the world’s one working gravitational wave observatory isn’t powerful enough to sniff out X9’s secrets. But the researchers hope that gravitational wave observatories planned for the future—ones that will operate from space—could help them study the system in more detail.