Scientists Find A Double Black Hole Inside A Nearby Quasar

Two holes in one! 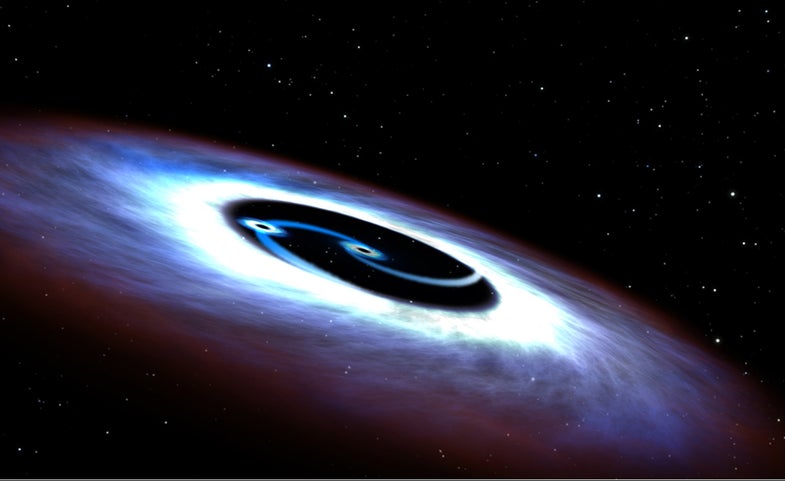 The brightest objects in the universe have massive black holes at their hearts.

Quasars (“quasi-stellar radio sources”) can be brighter than entire galaxies, and they’re thought to be fueled by the friction and heat of stuff that’s getting swallowed up by a black hole. (Although light can’t escape a black hole, it can escape from the event horizon—the boundary and point-of-no-return surrounding the black hole.)

Now, it turns out that the quasar nearest to Earth, located 600 million light-years away in a galaxy called Markarian 231, is actually built around two twirling black holes. It’s a first-of-its-kind type of find, and scientists think there could be a lot more quasars with binary hearts out there.

Hubble data revealed a mysterious hole in the quasar’s accretion disk, or the ring of gas that spirals around the black hole, waiting to fall in. After doing some modeling studies, scientists concluded that the system must be made of two black holes: a large one and a small one orbiting each other.

The larger of the pair is estimated to be 150 million times more massive than our sun, while the puny companion is only four million times the mass of the sun. In a few hundred thousand years, the two will spiral into each other, resulting in what we can only guess would be the end of the universe. (Kidding!)

The team, based partly in the U.S. and partly in China, thinks the binary formed when the two galaxies merged. The merger seems to have been good for the star-forming business: Mrk 231 births stars at a rate that is 100 times greater than our Milky Way.

“We are extremely excited about this finding because it not only shows the existence of a close binary black hole in Mrk 231, but also paves a new way to systematically search binary black holes via the nature of their ultraviolet light emission,” Youjun Lu of the National Astronomical Observatories of China, Chinese Academy of Sciences, said in a press release.