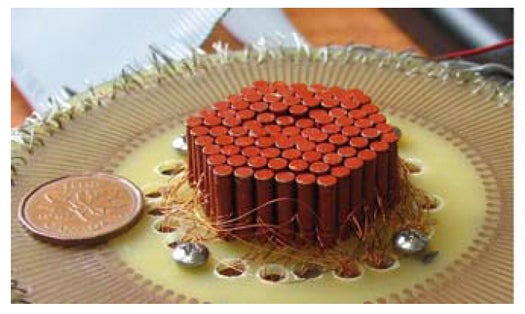 The 91-actuator Array That Manipulates the Liquid Mirror

Imagine a volume of reflective liquid like mercury in a bowl. Spin the bowl, and the liquid will push toward the edges, forming a concave mirror as smooth as the best mirror glass. But unlike highly specialized mirror glass, it’s just a bowl of mercury. It costs next to nothing by comparison.

As such, liquid mirrors should be important, inexpensive astronomical tools but they’re not. For one, you can’t turn a bowl of mercury on its side, so a liquid mirror could only power a telescope that looks straight up. More importantly, the advent of better adaptive optics for glass mirrors has kept glass in favor among astronomers.

When light from space passes through the atmosphere it degrades, giving earth-based telescopes a murky picture of the cosmos. To compensate, adaptive optics systems employ either very thin, pliable mirrors or honeycomb arrays of tiny hexagonal mirrors that can be adjusted to compensate for the light degradation, undoing the effects of atmosphere on light.

Liquid mirrors, however, could come back into fashion in a big way thanks to some developments that make them act like adaptive optics systems without requiring the adaptive optics price tag. Using a ferromagnetic liquid (rather than mercury), researchers pioneered a novel way to create deformable liquid mirrors a few years back, but there were some problems. For one, the magnetic fields used to deform the liquid couldn’t be cycled quickly enough to be useful in astronomy. For another, there was a non-linear disconnect between the deformation of the mirror and the magnetic field strength that required a highly complex algorithm to be built from scratch.

Now, those same researchers from the Université Laval in Quebec have published a paper saying they’ve resolved those problems. They now claim they can cycle their magnetic fields 100 times faster, and by applying a second uiform magnetic field atop the original one they’ve eliminated that disconnect between deformity and magnetic field strength.

Another way of saying all that: They’ve achieved a high degree of control over their liquid mirrors, and they can do it with off-the-shelf algorithms written for conventional adaptive optics systems. That means these powerful optics can be build for a relative pittance, bringing observatory-strength optics to the masses.