Want to know how to save the bees?

Plus some bee-utiful photography. 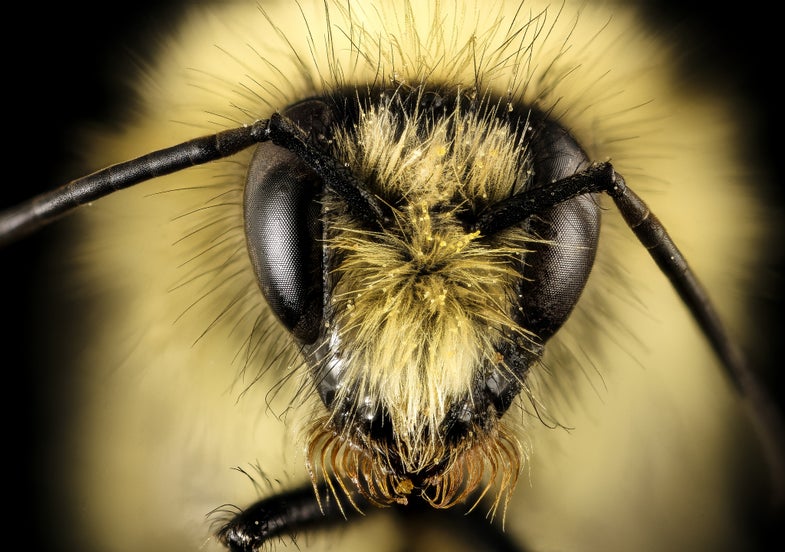 Most bees are solitary. This may come as a surprise, especially if your bee knowledge comes from reading about colony collapse disorder and that one time you saw The Bee Movie once on a plane. To most people, bees are fat, buzzing, social insects that live in hives suspended in trees—they’re certainly not skinny little buggers that dig holes to lay eggs.

But whoops, surprise! It turns out most bees are in fact small, solitary, stingless creatures that don’t produce any honey at all.

How is it possible that you didn’t know this? In any case, you’re not alone. A new study found that 99 percent of people think that bees are critical or important parts of the ecosystem, but the vast majority couldn’t even guess the number of bee species within 1,000. The average person said there were about 50, when there are actually about 4,000. Most of the participants in this survey couldn’t even discriminate between bees and non-bees in a picture.

“Who cares if I know how many species there are? I care about the bees!” you might say to yourself. And maybe you have a point. You don’t have to be a pollinator expert to think that it’s important to save bees. But it’s hard to rescue something that you don’t really know. If you’ve been worried about colony collapse disorder—or considered becoming a beekeeper to save our buzzy friends—you’ve been worried about the wrong bees. Let’s get a few facts straight:

Only about 14 percent of global crops get an increased yield from honeybee pollination. Wild bees and other bugs handle the rest. All the tiny efforts of thousands of species of native bees, most of them leading solitary little lives, add up to an enormous amount of pollinating.

Honeybees have the PR advantage of building (relatively) ostentatious nests. They’re large and lumpy when found in nature, and a box of bees in a backyard is not an uncommon sight anymore. And because we can transport them in large quantities and keep them wherever, they’ve become useful tools for farmers. If your fields need pollinators, you can stick a beehive in the center and let them go to town.

Native bees are more shy. They’re like the tech team in a Broadway musical—you don’t realize it, but they’re actually running the show. Everyone’s watching the star, but without the tech guys the whole thing is done for.

Wild bees are the real MVPs, and we know alarmingly little about them

Native bees do the bulk of the pollinating, in part because honeybees often aren’t fit to do the job. Plenty of plants have flowers that are either too small or too large to accommodate a honeybee. That’s where wild bees (and other pollinators) step in. We know that they contribute significantly to the success of watermelons, blueberries, apples, and tomatoes, and that they probably do even more that we’re not aware of.

Because wild bees are often small, unobtrusive loners, they’re difficult to study. Specimen collection requires going out with a bee vacuum (the unofficial-official USGS bee manual recommends a souped-up Black & Decker 18 Volt Platinum Series Cordless Hand Vac). And even if enough citizens suck up bees for science, the specimens still must be preserved properly and sent along to experts like Sam Droege at the USGS Native Bee Inventory and Monitoring Lab. Most people can’t even come close to identifying bee species—getting just the genus right would be a feat. The differences between individual types is so minute that it takes a seasoned eye to notice them. You definitely couldn’t do it out in the field, and most would still be hard-pressed to do it under a microscope.

We know that wild bees are dying off, but since we never really knew how many species were out there to begin with, it’s hard to say how much trouble they’re in.

You can actually help save the bees

Now here comes the unpleasant part: You care about the bees, you want them to survive. What can you actually do to help?

Start by destroying your lawn. Yards covered with pristine green grass are bad news for wild bees. They want to live among wild plants with lots of flowers, so a well-manicured lawn is like a barren, dry desert to them.

If you’re too attached to your lawn to let wild plants take over entirely, try putting in a few native flowers at the edges. Your landscaping will look just as nice with local flowers as it will with exotic species. Restore what little habitat you can, and enjoy the literal fruits of your labor when native pollinators keep everything in bloom.

Better yet, live in a city. Suburbs destroy ecosystems willy nill-ily. From an ecological standpoint, it would be far better to compress everyone into tight blocks and let the surrounding wilderness grow as it pleases. Or, you know, just plant some native flowers. Whichever is easiest.