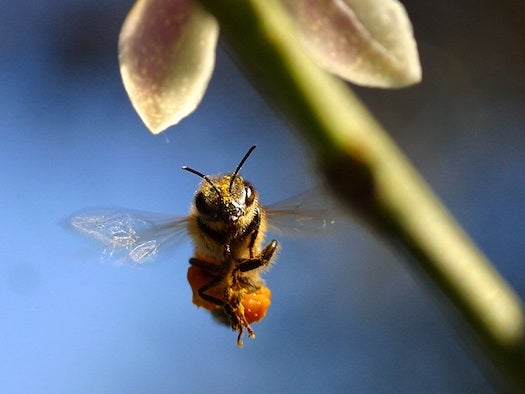 Here’s a new idea for protecting the declining honeybee population in the U.S. One team of scientists is importing European honeybee semen for fun and storage.

The team, based at Washington State University, has imported bee semen from subspecies that live in Italy, Georgia and the eastern Alps. The Washington team hopes to use the European sperm to fertilize American queen bees, producing offspring that may be more resilient to colony collapse disorder, the mysterious syndrome in which workers abandon a colony, dooming it to die.

European beekeepers have also suffered from colony collapse disorder, so it’s not that European bees are more resistant to the problem. An injection of European sperm will diversify the American bee gene pool, however, which may lead to healthier American insects.

Beekeepers began reporting colony collapses in 2006, according to the U.S. Department of Agriculture. Since then, an average of 33 percent of human-managed hives in the U.S. have died every year. If hives continue to die at this rate, pollinating would be come much more expensive, driving up food costs in the U.S., the U.S.D.A. says. Crops from almonds to berries to broccoli to onions all depend on bee pollination.

In addition to breeding colony collapse-resistant bees, the Washington researchers hope to breed new bees with other traits American farmers from different regions want. Italian honeybees, for example, are quick to reproduce, a boon for American farmers in warmer areas who want bees to pollinate early-blooming crops. Farmers in cooler states, on the other hand, want bees that wait longer to reproduce, past when they might be threatened by a late frost.

And what they can’t use now, the researchers will freeze for later in a bee sperm bank. 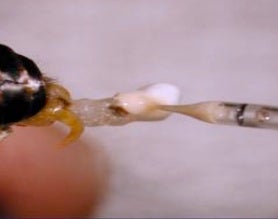 Collecting Semen from a Drone

The sperm bank brings unique genetic diversity to America’s bees. Since 1922, when scientists discovered a parasite was likely causing large bee die-offs in England, the U.S. has restricted the import of live bees from overseas. For decades, the bans protected U.S. bees from the 1922 parasite, but they made the U.S. bee gene pool small.

To expand their ability to breed healthier bees, the Washington team members got a special permit from the U.S.D.A. in 2008 to import the semen they want. The semen is screened for viruses before it comes into the U.S.

That means, of course, that the task of collecting bee semen falls upon the U.S. team’s colleagues overseas. (I would totally do it, but there’s this whole ban thing… so I guess you’re going to have to, sorry about that.) To do the deed, researchers press gently on a mature drone’s abdomen, which pushes semen out. The researchers then touch the tip of a tiny tube to the semen, which flows up the tube by capillary action.

The Washington State team receives semen as a liquid, in which form it will last 10 to 14 days. The team has developed a way to freeze the semen using liquid nitrogen, however, saving the sperm for decades of experiments to come.