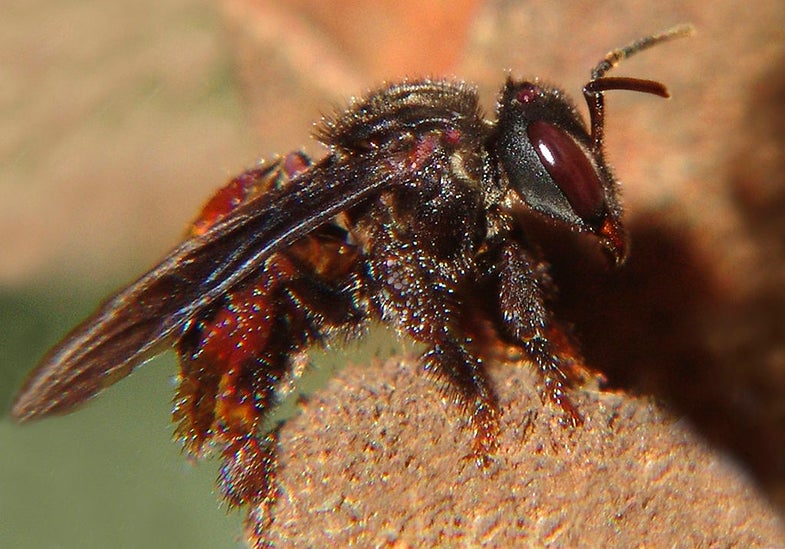 Imagine you’re a bee. Buzz, buzz, you’re looking for flowers. Good for you. Now, as you might imagine, there are competing bees afoot–naturally you’re not the only species looking for pollen and nectar. Let’s say you’ve found a nice cluster of flowers, a good source of food. You might imagine that with competing bees–eavesdroppers–around, it is best to communicate quietly. In many cases, you would be right. But that’s not always true. Sometimes it is best to conspicuously communicate the location of a food source to your friends, eavesdroppers be damned!

A new study found that in the presence of competitors, several species of stingless bees make a big stink about the location of their food (somewhat literally: the bees signal its location with loads of smelly pheromones). Perhaps counterintuitively, they found, this actually helped both themselves and their competitors, for this reason: When one species finds a good food source or flower, they tend to defend it heavily against other bees. So by making their flower-claim clear, the species signals that they have found it, and are willing to defend it. This allows the other species to steer clear, and avoid putting up all the energy that would be required for stealing away said flower.

On the other hand, food sources with fewer pheromones were readily visited by competing bees.

“Until now, it was thought that eavesdroppers select against conspicuous signals, for example by more easily finding and eating prey that sings loudly,” said Washington State University researcher Elinor Lichtenberg, a co-author of the study, which was published this week in Current Biology. “But our results show that eavesdroppers can help select for the same conspicuous signals that are easiest for intended recipients to detect and understand.”

The finding shows that eavesdroppers can affect the evolution of animal communication in unexpected ways–sometimes dampening a signal, sometimes amplifying it.

Many species of stingless bees, by the way, also produce honey, and the craft of rearing and producing the sugary treat from these animals is an ancient one (called meliponiculture), practiced for example by the Maya to this day.