How To Save America’s Rarest Turtle: Lower Our Expectations

How do we decide how rare an animal is? How do we figure out how long before it goes extinct? And how do we stop that from happening? 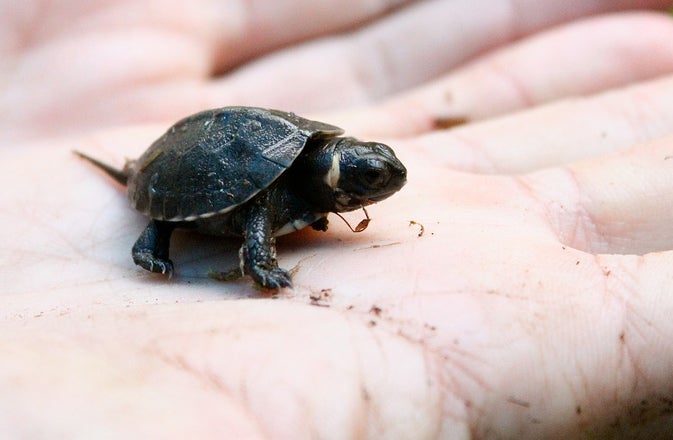 There’s a conservation-biology rule of thumb that, for a species to survive for another century, it must have a stable population of about 5,000. Want to settle Mars? Bring 4,999 other unrelated humans with you and populate it.

And yet a recent study finds that the bog turtle–the rarest turtle in the continental US–could survive with only 40 members, including 15 breeding females. The study’s authors want this to change how legislators protect flora and fauna. But will it be for the best?

The bog turtle is North America’s smallest and rarest native turtle. It’s primarily found in New York, New Jersey, and Pennsylvania, though there are isolated populations in North Carolina, and estimates of its population range from about 2,000 to 10,000, a loss in population of 80 percent in the past 30 years. George Amato, a conservation biologist at the American Museum of Natural History, told me that the turtle lives in a very specific and disappearing habitat called a fen. Fens are a particular kind of wetland, sort of but not quite like a marsh or a bog (yes, these are all different, ecologically speaking). The predominant theory about these turtles is that they used to be very widespread during the later part of the Late Glacial Maximum, about 10,000 years ago, when the ice sheets that covered North America began to melt. As they melted, they turned the land incredibly soggy, forming lots and lots of wetlands, including fens–a happy time for the bog turtle, which spends most of its time submerged in fen mud. But as the continent dried out and temperatures continued to rise, there were fewer and fewer fens, so now the bog turtle is patchily distributed in increasingly rare and specific environments. “As the temperature changed, that environment has become kind of a relic,” says Amato. “They probably weren’t isolated before, but they are now.”

It’s also a victim of the pet trade–Amato says that when the species was written about, biologists “wouldn’t actually put the exact location of studied populations” in their articles, to keep collectors in the dark about where to find them. And, of course, there’s encroaching human development and invasive species of plants which choke out its food sources.

There’s a significant effort on the part of legislators, conservationists, and zoos to boost the turtle’s population. But this study, published in this month’s issue of Conservation Biology, finds that as few as 15 breeding females (and about 25 males) could be enough to sustain the bog turtle’s population for another 100 years. The bog turtle lives for decades–up to 50 years–and gives birth to one offspring per year with a nearly 33 percent chance of survival, which is quite high. That’s a major shakeup to the idea that a given population needs thousands to survive. 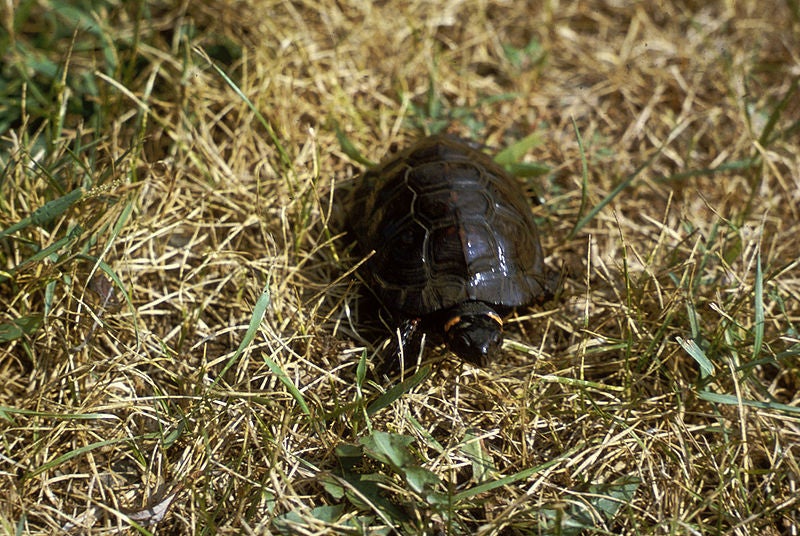 When biologists want to get more precise than the 5,000-individuals rule, they can calculate a number called the Minimum Viable Population, or MVP, the result of computer simulations to figure out the lowest possible number of members of a species that would result in a 90-95 percent probability of survival after 100 years. The game is to balance the number of lost specimens (due to death or leaving the group) with the number of new specimens (being born or coming in from another group).

Those simulations take into account how long the species generally lives, how often it breeds, the size of the litter, and the probability of young surviving into breeding age. Then it adds in external sources of stress, which could include inbreeding, natural disasters, climate change, encroaching human development, poaching, or any other event that could have an impact on a population. You come up with a few hundred or thousand possibilities–what if the temperature rises 2 degrees, what if poachers snag one female from a population per year for the pet trade, what if it loses 7 percent of its habitat due to construction of some awful beige McMansion–and see how often the species will survive to see the year 2113. Weight them and average them and you’ve got your number. But these simulations are basically possible futures for the species, like a sci-fi writer discussing the near future. They’re well-researched guesses, but they’re guesses, and they’re extremely important for deciding what kind of protection to give each species. According to George Amato, “there’s been a lot of discussion [about MVPs]; it’s a little controversial.”

The bog turtle is highly protected, and any statement about its long-term survival will necessarily have an impact on how it’s protected. Kevin Shoemaker, the author of the paper, told me that “the point I’d like to make is that in a larger context, these very small units are very, very important for conservation. We don’t want to discount very small populations just because they’re so small.” Populations in the double-digits are sometimes seen as lost causes–but this study also indicates that maybe that’s not the case. It takes issue with the problem that conservation resources are often shifted away from populations with numbers as small as the bog turtle’s, when in fact, as Amato says, “protection of small and fragmented populations may constitute a viable conservation option for such species.”

I spoke to Dr. Alison Whitlock of the U.S. Fish and Wildlife Service to see about the legislative effects of the study. Under the Endangered Species Act, each threatened species is given a recovery coordinator–a kind of czar who’s in charge of that species’ well-being. Dr. Whitlock is that person for the bog turtle, and she was thrilled about this study. “This actually gives me more hope,” she said, as soon as I asked her about the paper. “For those of us who’ve been working with bog turtles for years, we’ve had a gut feeling that they’re holding on in these small populations, but they’re still there and still worth saving.”

The bog turtle is protected federally. If you’re a developer in Pennsylvania or New York or wherever else, you have to take your prospective project to your individual state agency so they can check with Dr. Whitlock (or another expert) and make sure the project won’t violate the federal protection. Each state can make their laws stricter than the federal law, but the federal law is the minimum. I was concerned that this study would have the reverse of its intended effect–that legislators would see that the MVP is only 40, and think, well, why are we wasting money on protecting this turtle when there are a couple thousand of them? “If people think that you can have stable populations of 40 organisms, I’d be really concerned if managers were thinking ‘oh, then we shouldn’t worry so much,'” says Amato. Shoemaker echoed the concern; “I definitely don’t want to make it sound like a population of 40 individuals is all you need,” he said. 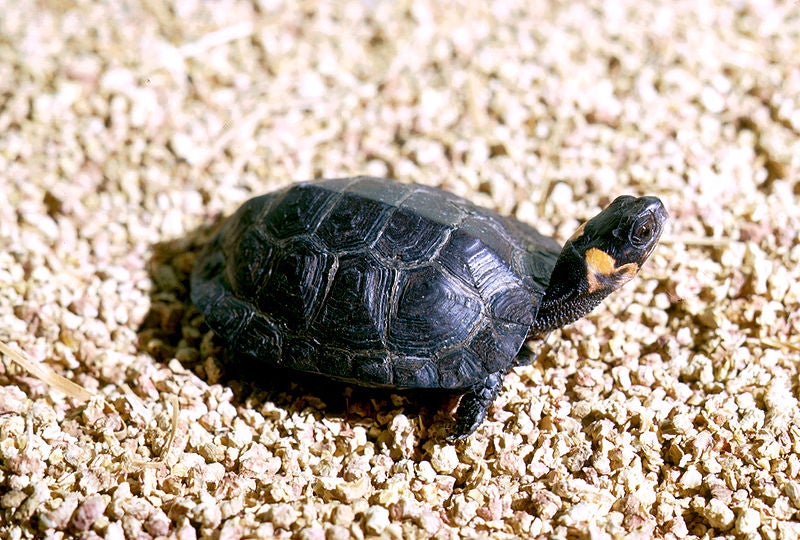 Young (But Not Baby) Bog Turtle

But Dr. Whitlock thought that an unlikely scenario for the bog turtle. It’s not up to local legislators; it’s up to her, and people like her. It’s a perfect argument for why top-down, federal mandates are so important. This is a very wonky situation, requiring quite a bit of knowledge of conservation biology and this species in particular, and local governments can’t possibly be expected to have bog turtle experts on staff. Hell, I spoke to just about every bog turtle expert in the country while trying to figure out what’s going on here, and discovered that there are like…four of them. And they’re in charge, just the way they should be, even if they may not have as many resources as they’d like.

In fact, Dr. Whitlock believes that this study is going to have only positive effects on conservation efforts for the bog turtle. The federally mandated minimum conservation is not always ideal; Dr. Whitlock works for the government, and was not entirely willing to criticize her employer, but made it clear that the federal laws are only the bare minimum. With this extra data, she and other conservationists can go to the state agencies and make a stronger case than ever before. “Sometimes it’s hard to go to the next step and argue for land preservation or resource protection,” she said. “This gives us a little extra backing to not just protect but also restore.”