It's all about a tender leg rub, ladies. 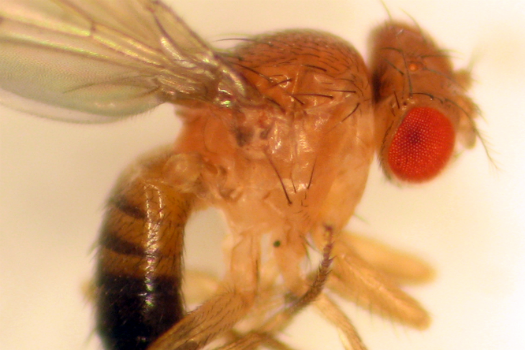 All cats are gray in the dark, as the ever-wise and ever-lecherous Ben Franklin put it. But how do you figure out if that cat is actually a dog? Scientists don’t entirely understand how animals know not to get it on with another species, a evolutionarily useless process that would at best lead to hybrid animals that probably wouldn’t survive (or would be sterile, like like mules).

So what stops animals from trying to have sex with animals they can’t reproduce with? For the fruit fly, apparently, it’s all in the leg. Researchers have discovered that sensory neurons in the foreleg of male fruit flies allow them to actually taste whether the female they’re chatting up is of the right species. The discovery is published in a paper online this week in the journal Cell.

When approaching a nice-looking ladyfly, a male Drosophila melanogaster will give her a little tap (or a bunch of them) with his foreleg. A chemoreceptor called Gr32a allows him to taste “unpleasant-tasting waxy chemicals on the cuticle, or outer skin, of individuals of other species,” according to co-author Devanand Manoli of UCSF. Gr32a gets activated by females of any other species–at which point the male fruit fly stops the love train right then and there.

Without the receptor, the male fruit fly will try to get it on with anything that moves–even species that are way bigger than them and look completely different. This also happened when researchers removed the forelegs of some related fly species, though not all–it seems D. virilis, a distantly related species, might use some other mechanism.

Female fruit flies also have neurons that express Gr32a, but they don’t use them in the same way–to tell other species to buzz off. It’s not clear what the function of Gr32a is in females, since they use some other mechanism to distinguish between species. “There is evidence suggesting that females may use their sense of hearing for this behavior,” senior author Nirao Shah explained in an email, since the males vibrate their wings in a species-specific song during courtship. Evidence suggests females may prefer males that sing their own species’ song.

“The two sexes have different biological needs for reproduction,” he wrote. “It therefore makes sense that they might use different mate-selection criteria and biological mechanisms to achieve their goals.

Shah and his team plan to continue to study whether Gr32a affects the mating patterns of other related species.

So there you have it: The foolproof fruit fly answer to “do you think he likes me?”