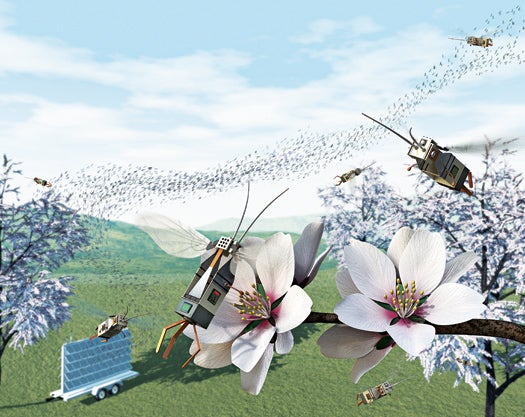 Teamwork among honeybees keeps a hive running smoothly. Worker bees collect pollen, nurse bees care for larvae, and male drones spread the colony’s genes. Each insect’s efforts ensure the colony’s success. That strategy led Gu-Yeon Wei to suggest that Rob Wood morph an almond-size robotic fly he had developed into a fleet of autonomous bees, each capable of carrying out specialized tasks. Perhaps, they speculated, the “RoboBees” could supplement the pollinating duties of bees stricken by a mysterious affliction that’s killed 36 percent of America’s 2.4 million hives. If you build the bee body, Wei told Wood, I can make the brain.

Wood could tweak his fly’s flight system so that the RoboBee could lift off and hover in place like real bees do, but he and Wei, both electrical engineers at Harvard University, knew they would need help replicating a bee’s other traits. So they recruited biologists to advise them on bee behavior and a materials scientist to develop a small rechargeable fuel cell. Computer scientists joined to write software to coordinate the colony’s actions, and Wei began designing a microprocessor that can crunch data from multiple sensors. Last fall, the team earned a $10-million grant from the National Science Foundation to build a network of autonomous bees.

In five years, the group hopes to have dozens of RoboBees that fly and coordinate with one another. Down the road, the ‘bots could monitor environmental hazards or search for survivors after a natural disaster. Collaboration is key for bees and the scientists, Wood says: “No one bee would be successful with these missions on its own. The same is true for us.” Here, a look at how a hive of RoboBees might operate.

How RoboBees Pollinate an Orchard

STEP 1: Establish Home Base
A farmer sets up a mobile RoboBee “hive.” In the future, an autonomous robot could haul the hive from field to field.

STEP 2: Survey the Landscape
Scout RoboBees leave the hive first and use their ultraviolet sensors to locate the same UV patterns on flower petals that real bees look for. Cameras on the bee’s head record landmarks underneath the bee to give it a sense of where and how far it has traveled.

STEP 3: Make a Map
The scouts return to the hive to recharge and upload flower locations to a central computer, which maps the entire orchard as more scouts report in.

STEP 4: Get Pollinating
Worker bees, outfitted with fewer sensors and bigger batteries for longer trips, head directly for the flowers, picking up pollen from one and delivering it to others.