You really can help save bees by planting wildflowers 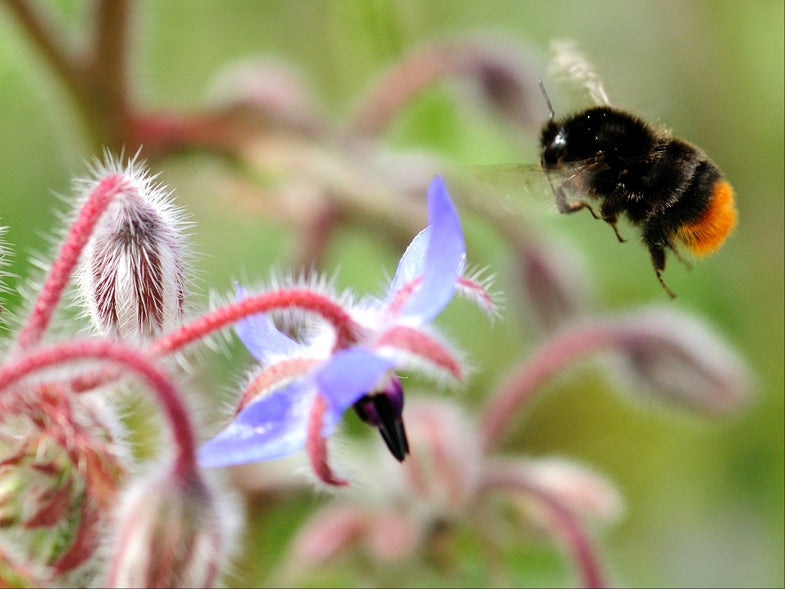 In America and Europe, bees are in trouble. And with politicians looking to gut the Endangered Species Act, it doesn’t look like these fuzzy pollinators can expect much help from the federal government. But the good news is, there’s something you can do to help.

A study out today in Nature finds that when bumble bees live near a rich array of wildflowers, their chances of survival to the next year increase by up to four times. In particular, it helps to have a mix of plants that flower in both spring and summer.

The findings aren’t exactly surprising for ecologists. Humans’ tendency to replace meadows and forests with farms thins out the diversity of flowers available to bees, but restoring patches of native wildflowers is thought to help. Using some neat sampling techniques, the new findings suggest that this method really does impact year-over-year survival for bumble bees.

“Measuring survival across generations is very tough,” says Sam Droege, a biologist who runs the U.S. Geological Survey’s Bee Inventory and Monitoring Lab. (He wasn’t involved in the new study.) “Bees are hard to mark in traditional ways, and there are so many of them that its hard to do that thoroughly enough to come up with a good estimate.”

For two years, ecologist Claire Carvell and her colleagues studied three bumblebee species over an area of 20 square kilometers in Buckinghamshire, UK. They used spatial analysis to map out farmed areas, grasslands, woods, villages, and bee-friendly flower and nesting sites—in some places, the landowners had restored wildflowers along the strips and hedgerows between agricultural fields. The researchers also collected DNA samples from more than 2,000 bumblebees to see which families survived into the second year; families that lived within a kilometer of flower-laden foraging habitats fared better.

Using DNA and spatial analysis is a novel approach, says Stephen Buchmann, an entomologist at the University of Arizona at Tucson. “I know of no other team anywhere in the world that has done anything similar.”

Providing strong support for the link between habitat restoration and bumblebee survival could help conservation efforts, although the study needs to be replicated in other species and across a broader range of terrain, population geneticist Jeffrey Lozier noted in a commentary on the new study.

If you’re interested in helping the bees, all it takes is a few square feet of lawn or potted plants. It helps to include sand, mud, and patches of bare ground for bees to nest in. And be sure to plant a mix of wildflowers, so that you’ll have flowers blooming throughout the spring, summer, and fall.

“Bumblebees, whose pollen palette is very broad, benefit from retaining a wide range of native wild flowers in an environment,” says Droege. “Other bees are much more restricted in their diet, and loss of plant biodiversity simply eliminates some from the landscape completely.”