Just hum really loudly at them. 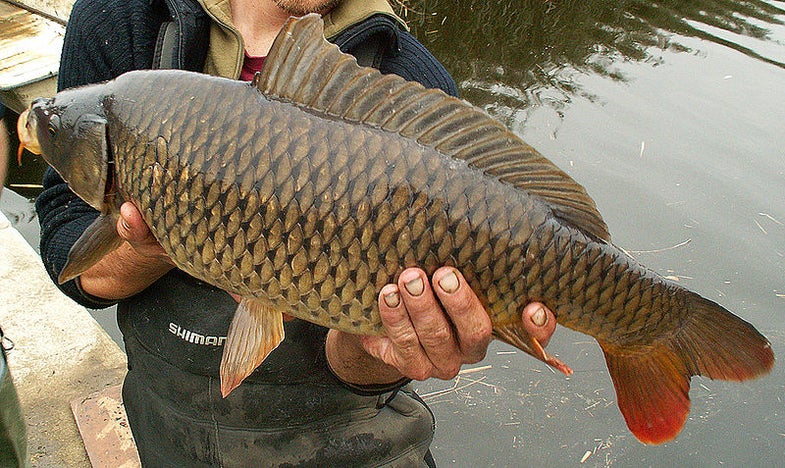 The common carp (Cyprinus carpio) is one of the world’s most destructive invasive species, found on almost every continent, screwing things up. But a new method may give us the upper hand in carp control: acoustical conditioning.

The common carp is a freshwater fish native to Eurasia, but it’s been introduced almost everywhere and is particularly destructive in the Great Lakes. They often eat the eggs and destroy the nests of native fish. They eat submerged vegetation that ducks depend on. And they can’t even digest their food properly–their excretions aren’t nearly as digested as most freshwater fish, so their waste is full of nutrients that attract excessive amounts of algae. They are a menace, and they must be stopped.

But there’s no agreed-upon way to halt their spread; introducing species-specific viruses hasn’t worked, encouraging people to eat them hasn’t worked (at least in the U.S.; in Eastern Europe, they’re often eaten), nets and poisons haven’t worked. A newly published study from the Department of Biology at the University of Minnesota-Duluth may have a new answer: carp, it turns out, are trainable.

Acoustic conditioning has a long history with animals; Pavlov’s dogs are probably the most famous example. Associate food with a particular sound, and soon the animal will expect food when the sound is heard.

The University of Minnesota-Duluth experiment used a pure tone at 400Hz with the carp, and found that the carp are very quickly able to make the association between the tone and food, and that they retain the behavior for months.

For five months after the researchers had stopped providing food along with the tone, the carp continued to respond to the tone. That’s quite a long time! According to the paper’s abstract, this suggests that “acoustical conditioning may be used as a management strategy in which the movement of wild carp can be manipulated for trapping and removal within a lake system.”

I’m not entirely sure how that would work; to condition an animal, you need that food reward at the beginning. So, sure, carp that have been trained would respond to the conditioning, but trained carp aren’t exactly the problem–it’s the millions of untrained wild carp that are wreaking so much havoc. That said, it gives us more insight into how the brains and behaviors of this fish operate, which could lead to more discoveries down the road.

Check out the paper here.