Mystery Animal Contest: Who Is This Fuzzy Leaf-Muncher? 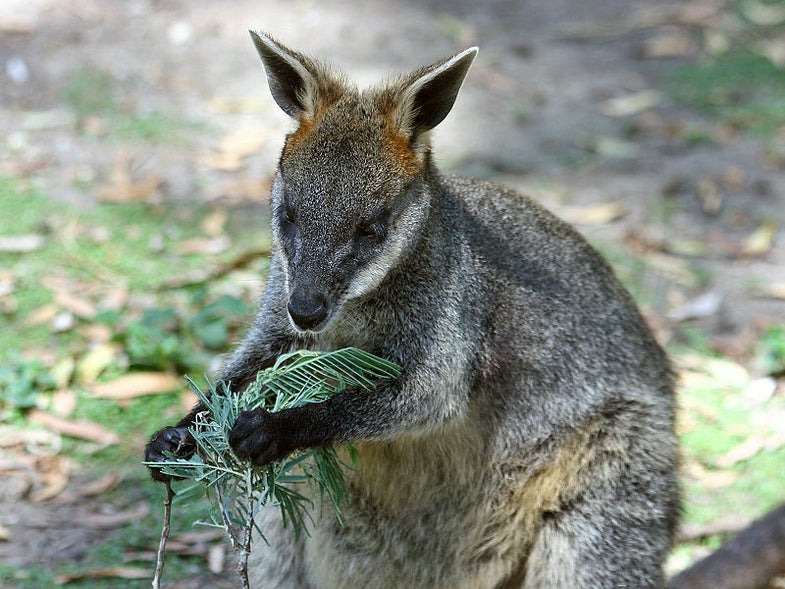 Update: And the winner is…

@oracle33c, whose displayed username is simply “cat,” correctly guessed that this is a swamp wallaby–and even better, guessed it with the Linnaean name, Wallabia bicolor. The swamp wallaby is one of about 30 species of wallaby. Interestingly, wallabies, kangaroos, and pademelons (the smallest of this type of animal) are all in the same family and subfamily, known as the macropods. They’re all pretty closely related, and are loosely separated by size: kangaroos are the largest, then wallaroos, then wallabies, then pademelons, which are the teeniest.

The swamp wallaby is native to eastern Australia, typically grey and rust-colored (hence the Linnaean name), and are about two feet in length, making them smallish wallabies. We picked it because it’s a very unusual wallaby, considering the high degree of similarity of behavior and genome amongst the macropod family; it’s the only wallaby that’s a dedicated browser rather than grazer. That means it wanders around, picking leaves and berries and things off of small trees and shrubs, rather than eating grass or other ground-growing plants. That makes it different enough that some biologists want to put the swamp wallaby in its own genus–although, it can breed with one other wallaby species, the agile wallaby, which usually indicates the two animals should be in the same genus. Hi swamp wallaby!