Is your idea of a bat something scary like a vampire bat or weird like a leaf-nosed bat? Meet the blossom bat. Even its name is adorable! 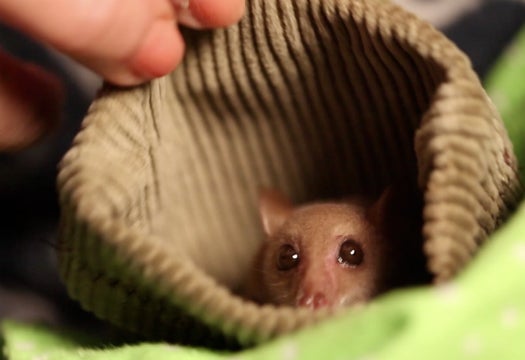 So the first thing to know about bats is that there are two different suborders, which vary in geographic location and behavior but most importantly, for our purposes, in cuteness. Microchiroptera is the kind of bat we’re most familiar with here in the States; these are the little, semi-ugly ones that use echolocation to hunt. Now, we love all bats, because they are exceptionally fascinating creatures, but we’re prepared to admit that microchiroptera is not the most attractive suborder out there.

Macrochiroptera, on the other hand, is adorable! This second suborder is also known as the “megabats,” or, less scarily, as the fruit bats. These include the real big guys, like the flying foxes, but not all megabats are big. This little guy here is the blossom bat, and it’s tiny–the smallest macrochiroptera in the world, small enough to fit comfortably in the palm of your hand.

The blossom bat is native to Australia, where it eats, as you might expect, nectar and pollen from flowers. It’s not unlike a hummingbird in some ways; it’s a very small pollinator, equipped with a long, sticky tongue to snatch up delicious sugary nectar. It’s also quite rare, as it’s particularly susceptible to the destruction of its natural habitat. This particular bat, a female named Blossom, was found as a baby “after a suspected cat attack,” and rehabilitated at the Bat Conservation and Rescue Center. After a successful recovery, it was released back into the wild.