From Berlin to Mississippi, feral pigs are proving to be one of the most efficient and dangerous invasive species ever... 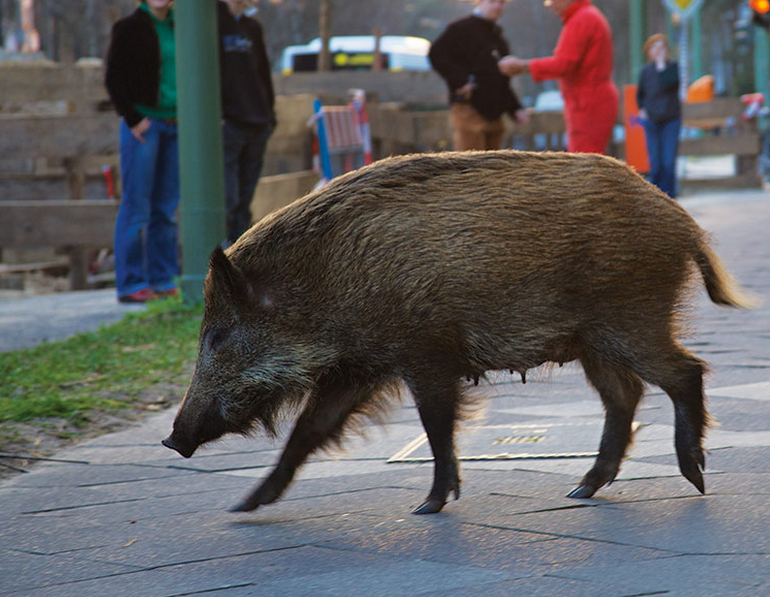 From Berlin to Mississippi, feral pigs are proving to be one of the most efficient and dangerous invasive species ever known. Smart, industrious, voracious and omnivorous eaters, they reproduce quickly and destroy everything in their path. Modern Farmer has a lovely feature up on the menace–and yes, it is a menace. “The issue is as serious as swine flu,” says Modern Farmer.

Wild pigs stick to one area until all food sources are tapped out. Their method of “rooting up” buried treasures (roots, acorns and the like) creates large swaths of cratered, barren terrain. The scorched earth is then abandoned in the hunt for another food source.

This voraciousness is problematic for many reasons — destruction of natural ecosystems, choking out native species — but none is more prevalent than decimated crops. Harvests of corn, rice, soybeans, and even cotton have been wiped out by roving boars. Of the approximate $1 billion in wild boar damage across the U.S. each year (a figure Strickland [an expert] calls a “gross underestimate”), a majority is chalked up to agriculture.

So, they’re bad. But why don’t we just hunt them, as we do with other tasty overpopulated species like the white-tailed deer?

For one thing, pigs are much tougher targets than deer. Preternaturally smart (they’ve been called “dolphins of the land”) and fearful of humans, trying to get a bead on one can be an all-day affair. And if you do shoot a wild pig, you best use a high caliber and know where to aim. Their tough hides and thick skulls provide natural shielding that can be quite challenging to pierce. And a wounded wild pig isn’t something you want to wrangle with.

Eep. Check out the full (and very pretty!) story here.