Massive Snails Invade Florida, May Have Been Imported For Santería Followers To Drink Their Mucus

The latest in a long line of destructive invasive species in Florida might be one of the worst. 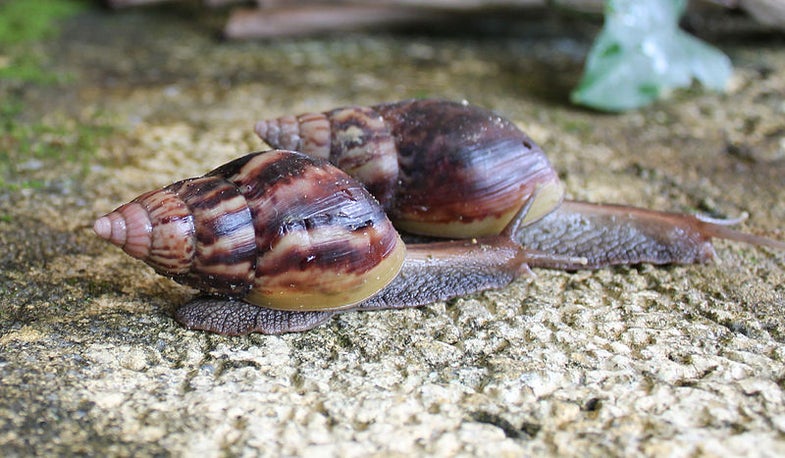 Last week in Gainesville, Florida, experts gathered for a Giant African Land Snail Science Symposium to discuss Florida’s latest panic-inducing invasive species. The land snail, Achatina fulica, is one of the most destructive invasive species in a state home to dozens of destructive invasive species: it’s massive, up to 10 inches long, eats just about any plant product it can find, devours stucco on houses, sometimes eats car tires, and can carry a parasite that’s dangerous to humans.

It’s difficult for the researchers to get across how awful these snails are; people seem to kind of like them, with their big eyes waving around on their eye-stalks. But they’re significantly more damaging to the natural ecosystem than, say, the Burmese python, which also took hold in the swamps and cypress forests of South Florida. The snails breed wildly, producing 1,200 eggs per year, and have few natural enemies in Florida.

Their effect on South Florida is mostly two-fold: first, they eat stucco and concrete (which contains calcium), destroying foundations of homes. They’re opportunistic omnivores, eating 500 varieties of plant and fungus, including many important economic crops.

The scientists are attempting to figure out how the snails, native to East Africa, arrived in Florida. A previous infestation came from a boy who brought three of them in his pocket from Hawaii. His grandmother released them into her garden, where, seven years later, those three snails had turned into 17,000 snails.

One theory traces the snails back to one Charles L. Stewart, an African immigrant who was arrested for importing the snails back in 2010. He says he is a practitioner of Orisha, a sort of predecessor to the more familiar Santería, and that the snails are traditionally part of Orisha rituals. A witness said that Stewart would “hold [the snail] over the devotee, then cuts the [snail] and pours the raw fluid directly from the still live [snail] into the mouth of the devotee.” This did not seem to have its intended effect of curing medical ills; devotees instead became violently ill as a result of drinking the snail mucus. Stewart claimed this was very traditional, though experts in East African religion claim to have never seen the snails used in this way before.

This is dangerous; the snails are eaten throughout Africa, both raw and cooked, but those parasites they carry, including salmonella, are most easily transmitted when eaten.