A complete genomic look at wild and domestic tomatoes might help us combine their strengths for an ultimate tomato. 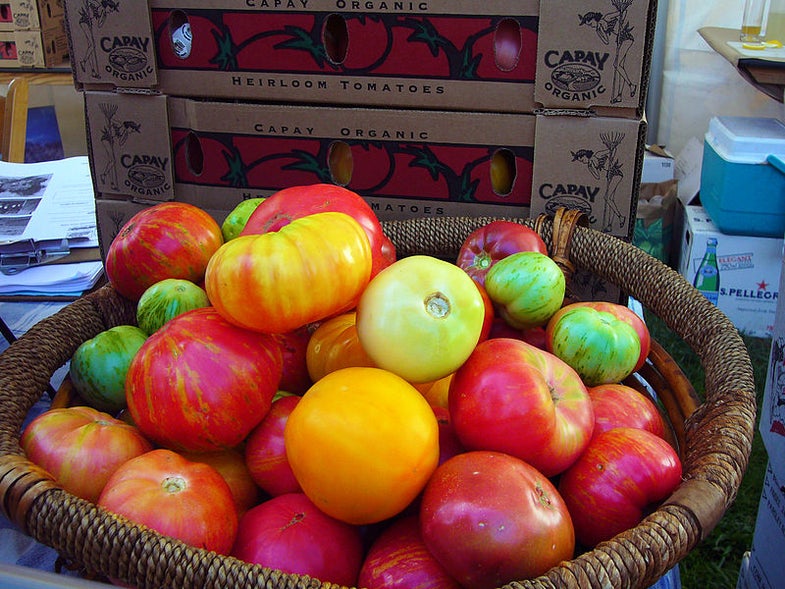 Hot-house tomatoes, like you might find at the supermarket in February, are beautiful, perfect, deep red fruits…with no taste at all. Wild tomatoes and heirlooms are expensive, difficult to grow, travel poorly, prone to disease, and often look flawed…but can taste amazing. Genetic biologists have been trying to combine the strengths of each for some time now, and researchers have just managed to compare the DNA and RNA sequences of domestic and wild tomatoes. Science20 describes it this way: “If the DNA sequence is the list of parts for making a tomato plant, the messenger RNA transcripts are the step-by-step instructions.”

By looking at the comparison between domestic and wild strains, they can tell which specific genes are active and how they affect the flavor, appearance, lifespan, and all kinds of other traits of the fruit.

The method used is called RNA-seq, a technique that uses next-generation sequencing technologies, which can handle millions of sequences at once, to sequence complementary DNA (cDNA) which gives insight into RNA.

Essentially, the team managed to get a complete look at the genomes of both domestic and wild tomatoes, and examined the effect of both natural evolution and artificial selection (the latter of which is severe in the tomato plant). The comparison allows them to see exactly what all these species have in common, and trace the way individual genes interact to affect the whole fruit. One species, for example, is found in the desert, and has accelerated genes to tolerate extreme heat and lack of water.

Theoretically, the comparison could allow genetic biologists to pick out exactly which genes they want to splice to have the desired effect on the tomato. This is a huge step forward; cross-breeding of wild and domestic tomatoes is common, but kind of a crapshoot, since previously the relationship between genes wasn’t as well understood. This “may help with future efforts to breed new traits into tomato or other crops,” said Julin Maloof of the University of California, Davis, who was one of the lead researchers on the paper. Comparative genomics is often used on diseases, to figure out the relationships between different strains, but this is the first time it’s been applied to tomatoes.

It’s certainly a better method than peeing on tomatoes to help them grow better. Genetically-modified tomatoes aren’t new; recall the controversial Flavrsavr from the mid-90s, which quickly went off the market, leaving no GMO tomatoes available for purchase. But if genetic modification can give us a tomato that’s got the taste and texture of an heirloom with the ease of growth, lack of disease, and ease of transport of a hot-house tomato, we’re on board.

You can read the entire paper here.