Orangutans Announce Their Travel Plans A Day In Advance

In the wild, male apes can plan ahead where they'll be going, and they keep their female friends apprised. 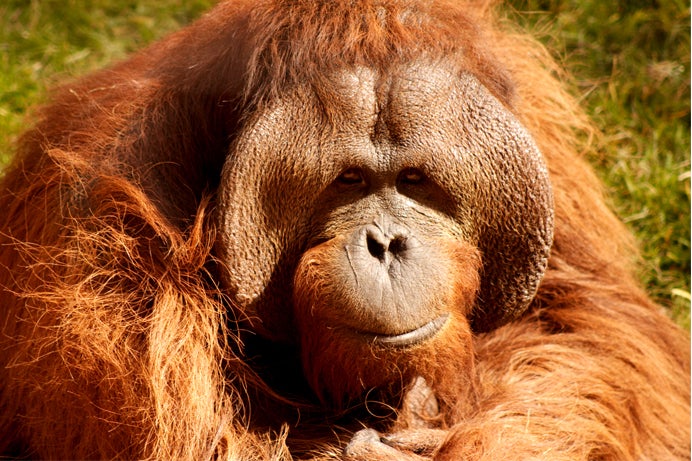 We often think of the ability to plan for the future as a uniquely human attribute. Recent studies have suggested that our primate cousins might be able to plan for certain occasions, as well (like the mischievous chimp who stockpiled stones that he could later hurl at zoo visitors) but whether they use this ability in the wild is harder to show. A new study from the Anthropological Institute and Museum at the University of Zurich indicates that wild great apes do, in fact, plan hours in advance, and announce their plans to their friends.

Anthropologist Carel va Shaik tracked the ability of male orangutans to plan their travels in Indonesia through what’s called a “long call,” a spontaneous cry certain males—the ones that develop large cheek pads, called flanged males—emit throughout the day. “It’s a very loud booming vocalization that lasts up to four minutes—usually one to two—that goes like woop woop woop. We call them pulses.” These male orangutans call in the direction they plan to travel up to a day in advance, he found, with the flanges acting like nature’s bullhorn to focus the call in one direction.

“Basically, they’re telling their female audience where they’re going,” he explains. Orangutans are more solitary than other apes, and most males live out of sight from other orangutans. The orangutans make these spontaneous long calls, which can be heard from up to a kilometer away, three or four times a day. Orangutans can recognize the voices of different individuals based on the call, and female orangutans seem to remain in earshot of the dominant male in the population.

‘They’re telling their female audience where they’re going'”Instead of shaking his head or turning his body around in all directions, which is what you would expect or what other species do, he looks in one direction very rigidly,” van Shaik, a professor at the University of Zurich, told Popular Science. The direction the male called in correlated with the direction he would move in over the next day or so. “Instead of broadcasting, it’s narrowcasting.”

What’s especially cool about the travel update is how long it can occur before the orangutan actually sets off. “When it’s predicting their travel direction, it’s predicting it for hours and hours in advance,” van Shaik says. “When [the male orangutan] makes a night nest, he calls in a particular direction, lies on his nest, sleeps for 12 hours. At the end of the next day, he still travels in that direction—he could have forgotten it by then.”

Van Shaik thinks this ability to plan probably extends to all great apes, a family that includes chimps, gorillas, orangutans and bonobos, but it’s a tough thing to prove. “You have to be lucky that they open the window, so to speak, to let you into their minds,” he says. “I’m sure they all plan; the question is whether you can show it.” Next, he wants to study whether the orangutans call again to announce a change in their planned direction.

The study appears in PLOS ONE this week.