A small city in Iowa is devoting 1,000 acres of land to America’s vanishing bees

Little habitats on the prairie to save our nation's pollinators 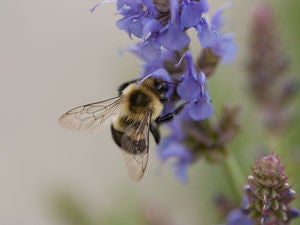 You’ve probably heard the news that our nation’s bees are in trouble. Pollinators have been disappearing for decades, and the population crash could threaten the global food supply. Now, a small city in Iowa has decided to do something about it.

This spring, Cedar Rapids (population: 130,000) will seed 188 acres with native prairie grasses and wildflowers. The city’s plan is to eventually create 1,000 acres of bee paradise by planting these pollinator-friendly foodstuffs.

Scientists think the pollinator crisis is caused by a variety of factors, including pesticides, pathogens, and climate change. Meanwhile, with farms, parking lots, mowed lawns, and other human developments replacing wildflower fields, bees have been losing habitat and their food supply. While many of the drivers behind bee population decline remain mysterious, the people of Cedar Rapids hope to at least give pollinators places to perch and plants to feed on.

The 1,000 Acre Pollinator Initiative grew out of a partnership with the Monarch Research Project(MRP), whose goal is to restore monarch butterfly populations. It was Cedar Rapids Park Superintendent Daniel Gibbins who proposed converting 1,000 acres into pollinator habitat over five years. So far, the project has secured $180,000 in funding from the state and the MRP.

“With the agricultural boom around 100 years ago, about 99.9 percent of all the native habitat of Iowa has been lost,” says Gibbins, who is spearheading the project. “When you convert it back to what was originally native Iowa, you’re going to help a lot more than just native pollinators. You’re helping birds, amphibians, reptiles, mammals—everything that’s native here relies on native vegetation.”

Cedar Rapids has developed a special mix of grasses and wildflowers to help restore that native habitat. The seed mix includes 39 species of wildflowers, and 7 species of native prairie grasses. While bees and butterflies are mostly attracted to the flowers, the hardy prairie grasses will prevent weeds and invasive species from moving in and choking out the flowers.

Gibbins and his team have catalogued all the unused public land where they could potentially plant the flowers and grasses. The list includes not only the rarely frequented corners of parks, golf courses, and the local airport, but also sewage ditches, water retention basins, and roadway right-of-ways, totaling nearly 500 acres. Cedar Rapids is working with other cities within the county to reach its 1,000-acre target.

Before they can seed the land with the special pollinator plant mix, Gibbins’ crew has to “knock back the undesirable vegetation.” That means mowing down, burning off, or in some cases applying herbicide to get rid of grass, weeds, and invasive species. They’ll lay down the special seed mixture in the spring and fall.

“You can’t just seed them and walk away,” says Gibbins. Although the pollinator habitat will be lower maintenance than a green turf that needs to be mown every week, the prairie grasses will require some care, including mowing once a year or burning every few years.

You don’t need to have 1,000 spare acres to help bees and butterflies. Even devoting a few square feet of your garden—or even a few small planters—to wildflowers native to your area could make a difference, says Gibbins.

“When creating pollinator gardens, the most important thing is to have a big diversity of wildflowers and heirloom crops that bloom in the spring, summer, and fall,” says Stephen Buchmann, a pollination ecologist at the University of Arizona and author of The Reason for Flowers. (Buchmann isn’t involved in the 1,000 Acre Initiative.)

Buchmann recommends against using herbicides or insecticides, or, if necessary, applying them at night when bees aren’t active. Providing nesting sites for certain bee species can help, too.

“People think they’ll just plant the wildflowers and the bees will come,” he says. “And that’s true in some cases, but the smaller the bee is, the less far it can fly. Some can only fly a few hundred meters.”

Some species nest in hard substrates, like the bare ground (bees hate mulch, says Buchmann), or in holes that you can drill in adobe or earthen bricks. Others nestle in sand pits or dead wood that’s been tunneled through by beetles. And it helps to have mud and water on the premises. The Xerces Society has a handy how-to guide on creating homes for bees.

The 1,000 Acre Pollinator Initiative is still looking into funding for the next four years, and they don’t expect to see huge jumps in the number of pollinators immediately. But Cedar Rapids is confident it will help, and they hope the project will serve as a model for the rest of the country.

And if enough local businesses and private landowners get involved, there’s no reason to stop at 1,000 acres, says Gibbins. “There’s a big push to extend this initiative up to maybe 10,000 acres in Linn County.”