How would you like to be literally cooked to death by bees? 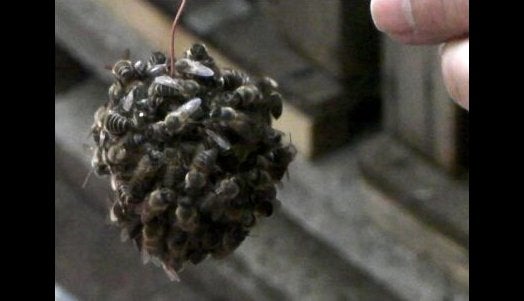 Bees are biologically interesting little creatures for a variety of reasons. There are their well-known talents, like communicating with the hive through dancing and producing the sweet, sticky stuff that goes great on sopaipillas. But they can also recognize human faces and solve some complex computing problems faster than computers. And now, thanks to Japanese researchers at the University of Tokyo and Tamagawa University, we are learning that bees can cook. Presenting: the “hot defensive bee ball.”

Japanese honeybees (cousin to the European variety) have a problem when it comes to the Asian giant hornet, a predatory insect that is much larger and quite aggressive toward smaller insects in the neighborhood. When Asian giant hornets threaten a Japanese honeybee hive, the smaller bees have developed a novel group behavior for dealing with their larger foe: they swarm around the hornet so frenetically that they actually cook the hornet inside of the moving pile of bodies.

This “hot defensive bee ball” behavior has been observed previously, but there are two interesting developments that are hot off the presses of the jounal PLos ONE today. Firstly, there’s the video below of the honeybees swarming an Asian giant hornet, which is pretty cool. Secondly, in studying the Japanese honeybees the researchers have detected a previously undiscovered kind of neural activity that takes place when the bees engage in “hot defensive bee balling.” It’s a kind of neural activity that isn’t seen in European honeybees, taking place in the higher brain center. We’re not sure exactly what that means yet, but if you’re a Asian giant hornet, take note.