From afar, the galaxy could look like a flashing rave. 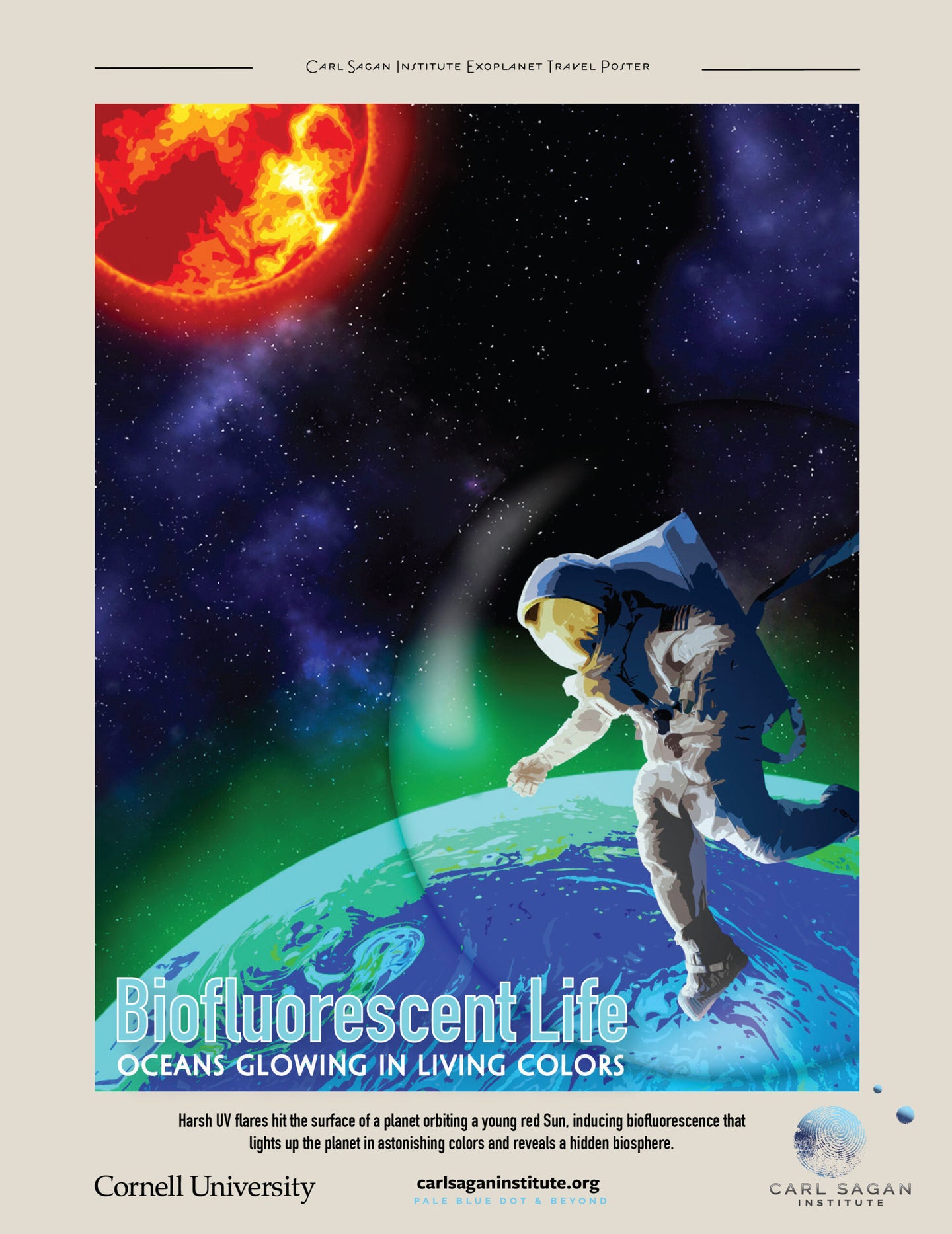 Though our cosmic backyard brims with planets, few seem fit for life as we know it. Some do orbit at just the right distance for water to stay liquid, but their hothead young stars tend to douse them with radiation that would quickly snuff out most Earthly life.

Alien life, however, could still find a way. Inspired by species of coral that take in dangerous ultraviolet light and reflect it away as harmless green and blue hues, a team of astronomers recently proposed that entire marine ecosystems on exoplanets such as the one orbiting our second nearest star (after the sun) could do the same. If so, the entire planet might respond to flares from its parent star with a fluorescent glow that future telescopes could pick up.

“Imagine how it would look,” says Lisa Kaltenegger, a researcher at Cornell University and one of the proposal’s coauthors. “It’s something that’s really beautiful to think about.”

As detections of exoplanets (planets orbiting other stars) pile up, so do the candidates for worlds capable of hosting life. Proxima b lies the closest, orbiting Proxima Centauri just over four light years from Earth. Then come the Trappist planets, a family of seven living 39 light years away. All appear to have similar masses to Earth, and some orbit at the not-too-cold, not-too-hot distance from their sun for any liquid H2O to avoid freezing or boiling.

But water doesn’t necessarily make a home. Both of these suns, like 75 percent of nearby stars, fall into the category of red dwarfs. These balls of gas are smaller, cooler, and redder than our yellow sun. They also tend to be much more “active,” a polite astronomical phrase that means they likely barbecue nearby planets with massive and regular solar flares. Proxima Centauri, our particularly well-observed neighbor, blows its top around five times a year—enough to blast away 90 percent of Earth’s ozone in just five years.

Proxima b and the Trappist planets huddle quite close to their dimly sputtering stars, orbiting every 11 to 19 days. That proximity makes them both a great target for exoplanet hunters, since they pass in front of their stars quite frequently (alien astronomers would have to observe our sun continuously for at least a year to detect Earth), as well as a terrible place for Earth life to live. Without ozone to block out the sun’s ultraviolet light, not even the hearty tardigrades would make it very long. “If you or I landed there,” Kaltenegger says, “it would be very unhealthy for us.”

But life on Earth had the privilege of evolving in a relatively ultraviolet radiation-free environment (or, at least has enjoyed ozone’s protective benefits for billions of years). Species emerging in a Trappist ocean would have had to find a more creative way to survive the ultraviolet bombardment. “If we know one thing about life,” says Kaltenegger, “it’s really good at adapting to circumstances.”

Some Earth corals, for instance, have developed the ability to absorb high-energy ultraviolet radiation, and then get rid of it by emitting a visible, lower-energy green or blue glow. Similar “biofluorescence,” the Cornell team proposed in their recent publication, could be key to survival on such a planet. Kaltenegger imagines a largely water-based world widely populated by biofluorescent floating algae, for instance, putting on a coordinated light show between the host star and the ecosystem. “Huge radiation hits the planet, and then the planet—this biosphere—would actually light up in response to it,” she says. 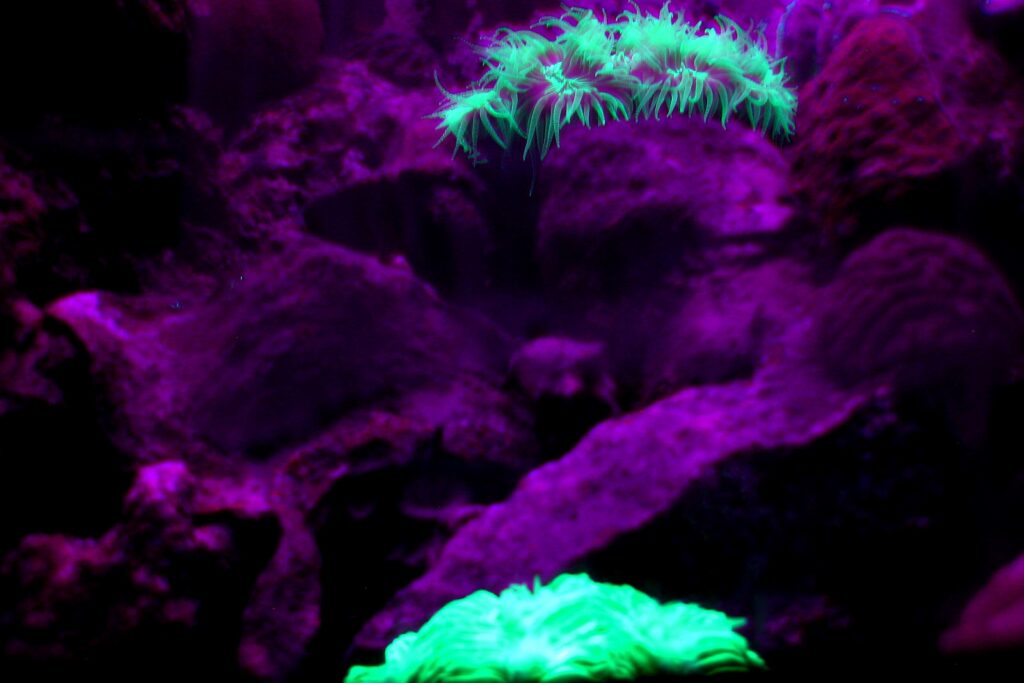 And next generation optical telescopes such as the Extremely Large Telescope (its real name), which is currently under construction in Chile’s Atacama desert and expected to begin operations in 2025, might catch such alien flickerings.

Kaltenegger and her collaborator, Jack O’Malley-James, considered a plethora of hypothetical planets covered to various degrees by clouds and glowing organisms. They found that in the ideal case (no clouds, algae perfectly blankets the planet), such a planet would glow 13 times brighter after a flare. A planet with clouds blocking half of the surface and 30 percent of the surface covered with life would glow twice as brightly. By way of terrestrial comparison, clouds cover about half of our globe and biofluorescent coral span 0.2 percent of Earth’s surface.

“The really surprising thing is that you could see it,” Kaltenegger says. “We were not expecting it to be a stronger signal than vegetation would be.” (Plants also reflect light in a unique way, which is another potential sign of life).

The real smoking gun would be the detection of a flare-induced glow, as well as an atmosphere containing oxygen plus some chemical that breaks down oxygen (indicating that life is continuously replenishing the supply). Exoplanet hunters may soon find themselves with the enviable problem of having too many potential planets to investigate, and signs of either a living atmosphere or a fluorescent glow could help prioritize future observations.

Of course, the whole idea rests on a small mountain of “ifs.” If the dwarf star hasn’t stripped the planet’s atmosphere to the bone. If the planet has water. If life found a way to fluoresce away the UV radiation. If that algae was successful enough to cover a sizeable portion of the planet. Some researchers consider those ifs to be substantial obstacles, but Kaltenegger suggests that such thinking is born from human-centric impressions of these alien environments, and that she’s trying to keep her mind open.

“It’s not bad for life, it’s bad for you and me,” she says. “This [research] is just us trying to make sure we don’t have blinders on, that we use the diversity that we know of here on the Earth to look for life somewhere else.”

Editor’s Note: Prior mention of dangerous infrared light has been changed to “ultraviolet,” which is the actually dangerous light source.