We’re one step closer to tracking down another Earth

The most robust census yet suggests that they’re out there, but they might take time to locate. 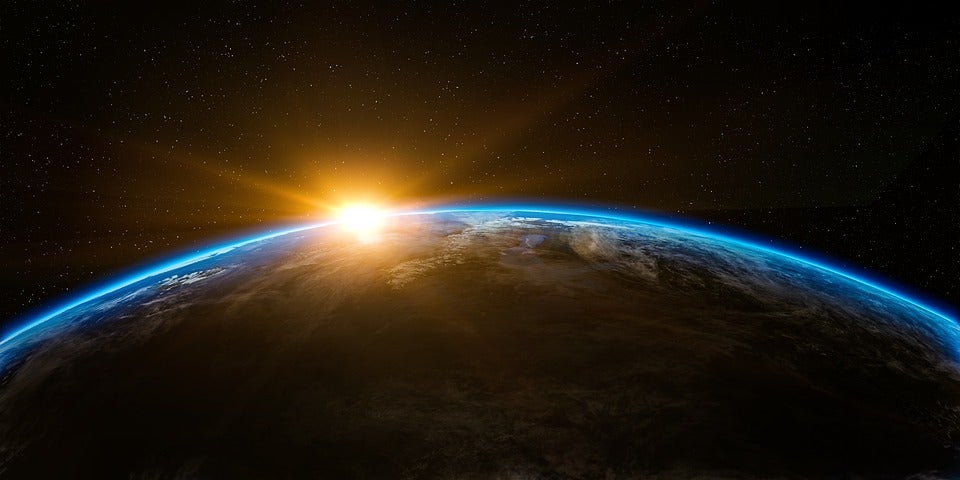 Astronomers have found more than 4,000 planets circling distant stars, yet none feel quite like home. Teegarden b is the right size, but it zips around its dim dwarf star in just five (Earth) days. Kepler-452 b takes a familiar 385 days to complete an orbit around its sun-like star, but appears to be a lumbering “superterran” much more massive than the rock we call home. Where, or even whether, true Earth-twins exist remains one of astronomy’s top mysteries.

While today’s space telescopes lack the ideal skillsets for spotting an Earth 2.0, astronomers are starting to get a sense of how frequently similar worlds may pop up in the cosmos. By combining the final data sets from NASA’s exoplanet spotting spacecraft Kepler with other recent surveys, a team of astronomers has calculated the strongest such estimate yet: Visit somewhere between three and three dozen solar systems, they say, and you’ll likely come across at least one Earth. They hope their results will inform the design of upcoming exoplanet hunting telescopes, as well as our understanding of the odds of life as we know it existing elsewhere.

“Is there the possibility of other life out there in the universe?” asks Danley Hsu, a graduate student at Penn State and coauthor of the research. “Trying to estimate the frequency of Earth-like planets around sun-like stars is one of the ways we can answer that question.”

Spotting that one in a handful, however, is another matter.

NASA’s current exoplanet-seeking eye in the sky is the Transiting Exoplanet Survey Satellite (TESS), which searches for the tell-tale stellar dimming that indicates a planet has passed in front of its star. Its cameras sweep across a majority of the sky, prioritizing nearby solar systems close enough for the Hubble Space Telescope and upcoming James Webb Space Telescope (JWST) to take a closer look.

TESS has already found more than 1,000 potential (“candidate”) planets, and NASA expects it to find nearly 20,000 more. Of those, perhaps 500 will be Earth-sized, but almost none will be Earth-like. Astronomers have to spot three dimmings, or transits, to be sure they’re looking at an orbiting planet (rather than a random dust cloud or flicker), so TESS’s frequent scanning gives it time to find only planets that fly around their star in a matter of days or weeks—not years.

The satellite also targets cool, red dwarf stars. They far outnumber brighter “G-type” stars like our sun, making them a great focus for a huge exoplanet haul, but they may not make friendly homes for life. To orbit inside their so-called habitable zone, where planets get just enough energy to keep water from freezing or boiling, planets have to huddle right next to the star in what we might consider Mercury territory.

Calling these dwarf star Goldilocks zones “habitable,” however, smacks of optimism. Planets there might enjoy balmy temperatures, but the nearby star would also douse them with ultraviolet radiation and solar flares that could strip atmospheres and fry emerging microbes. Organisms may find ways to eke out survival, but they would have to get creative.

NASA’s previous flagship exoplanet-hunting spacecraft, Kepler, was tuned to brighter, sun-like stars. For years it stared unblinking at the same moon-sized patch of sky, collecting the light dips it needed to identify exoplanets. After about four years, however, just as Kepler had been watching long enough to begin to catch the third and fourth transits of stars taking hundreds of days to orbit, a part needed to keep it stable broke down.

“We unfortunately missed the window,” Hsu says, “because the spacecraft died right around when we were starting to get more and more Earth-like candidates.”

The result was a catalog full of diverse exoplanets, but not a single Earth 2.0. In the absence of hard observational evidence, astronomers turned to statistical tools to count the uncountable.

Chris Burke, an astronomer at MIT who worked previously on the Kepler mission and is now involved with TESS, likens the task to conducting a census. You count whoever you can and think very carefully about who you can’t reach and why. “Your census is never complete,” he says, “you have to understand where you’re missing people.”

In the case of Hsu and his collaborators, that meant an intimate understanding of the Kepler spacecraft’s strengths and weaknesses. Looking for a dimming star is theoretically simple, but in practice you have to worry about dead pixels, false alarms, binary stars masquerading as planets, how accurately you know the size of each star, and a litany of other complications. “Each one of these little things will shape those detections,” Burke says, and you have to learn how to figure out which planets got knocked out during the detection process and which were actually too hard to see.

The Penn State team, which recently published its results in The Astronomical Journal, used an array of new data sets to make their estimate the most robust yet. Unlike previous studies, they had Kepler’s final list of exoplanets, and a complete record of tests the Kepler team did where they stuck fake planets into the data to test how well the detection process worked. They also used the latest measurements of star sizes from the European GAIA mission, as well as innovative statistical techniques. In the end, the group calculated that at least one Earth-like planet circles every 2.5 sun-like stars at best, and every 33 sun-like stars at worst. Hsu puts the odds that the actual average falls outside this range at less than 10 percent.

Burke, who wasn’t involved in this research but has published similar work in the past, called the estimate a “benchmark,” but added that other groups could continue to refine the calculation in the future. “It’s not the final answer,” he says, “but it’s certainly a step that needed to be done.”

As for when astronomers will actually find one of these Earth twins, neither Hsu nor Burke expect an imminent discovery. Hsu points out that this estimate describes the frequency of actual Earth-like planets, and that the number that happen to pass in front of their star at the right angle for us to spot them will be lower. He hopes that researchers will build next generation telescopes with these realities in mind. “We want to have a good idea about how many planets we expect to find,” he says, “so we don’t spend a couple billion dollars to design a spacecraft that has a yield of zero.”

The WFIRST telescope will replace TESS as the shiniest planet hunter on the celestial block in the next decade, looking for planetary fingerprints in the warping of stars’ gravitational fields. Researchers expect this technique to uncover hulking Neptunes that orbit far from their suns.

But for a true Kepler successor capable of bagging a true Earth twin, exoplanet hunters will have to wait at least until the 2030’s, when concept instruments such as the Large UV Optical Infrared Survey (LUVOIR) and the Habitable Exoplanet Imaging Mission (HabEx) could fly. These behemoths would attempt to snap exoplanet pictures directly by blocking out the overwhelming light of the host star. If they survive the planning stages, LUVOIR, HabEx, or something similar could be our best bet for finding out how unique Earth really is.

“We now know [Earth-like planets] exist,” Burke says. “It’s just a matter of harnessing the technologies to learn more about them.”