This distant world is a lot like Earth, but you wouldn’t want to live there

A familiar atmosphere with a few alien quirks. 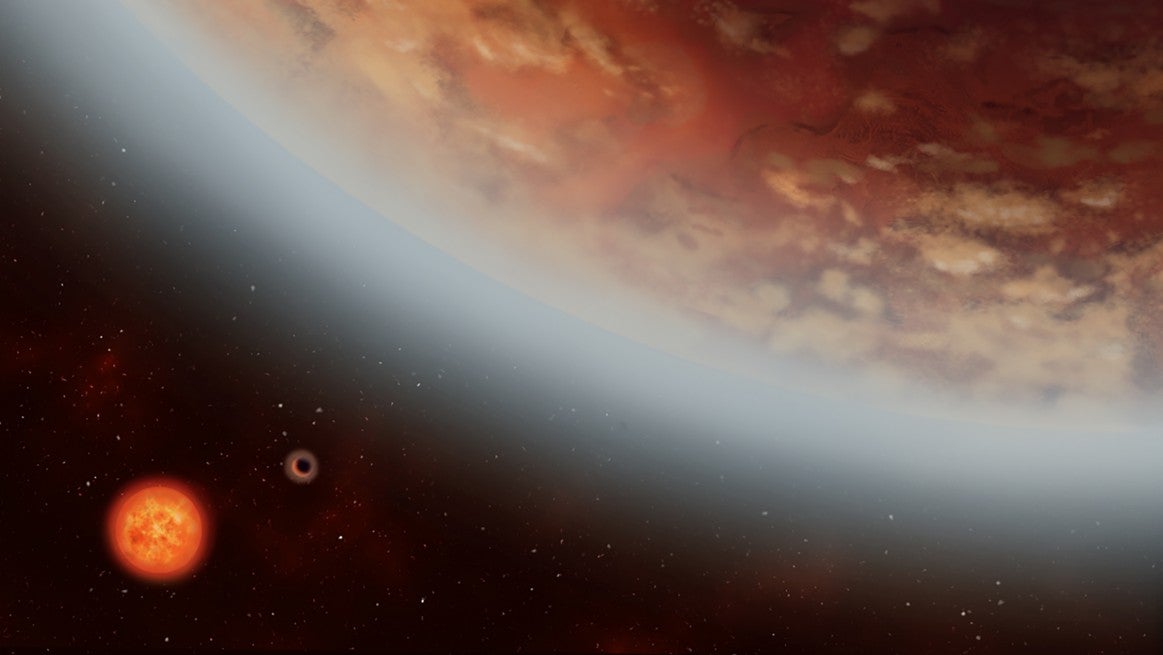 If you could pack a hot air balloon onto an interstellar spaceship and travel 110 light years to a certain planet orbiting a dim star in the constellation Leo, you’d have an experience not entirely unlike ballooning on Earth. The temperature, pressure, and moist air could feel quite pleasant, though you’d need an oxygen mask—and possibly an umbrella.

“It could happen that you get rained upon,” says Björn Benneke, an exoplanet researcher at the University of Montreal.

Telescopes hunting for flickering, wobbling stars have located more than 4,000 potential exoplanets in recent decades, some of which orbit in the not-too-cold, not-too-hot zone around their host star where water would have a shot at staying liquid. Others have even been found to harbor actual molecules of H2O. The exoplanet K2-18b, however, is the first to check both boxes, according to two studies published this week. Unfortunately, a few other decidedly unearth-like characteristics make K2018b an improbable home for life as we know it. But the discovery represents an important step toward finding planets we might actually consider hospitable.

“It’s the closest we have come to detecting some kind of environment similar to the Earth,” says Benneke, who leads one of the two teams studying the planet.

Everything scientists know about this alien world comes from the way it interacts with its star. The Kepler mission first spotted the star’s dimming in 2015, and follow-up observations with the Spitzer space telescope confirmed presence of a planet twice as large as Earth in 2017. A different instrument then weighed the planet by measuring the star’s wobble, finding it to be about eight times heavier than Earth. Another three years of observations with the Hubble Space Telescope managed to capture eight more flickers of light, leading to this week’s descriptions of the planet’s atmosphere.

The key to studying the atmosphere of a planet you can’t really see is to measure how big it looks using different kinds of light. A purely rocky planet with no atmosphere would perfectly block all colors, while each type of molecule in an atmosphere blocks only particular wavelengths. The atmosphere looks opaque in that variety of light, and the planet looks bigger against the background star. K2-18b, for instance, swells when viewed in the type of light blocked by water.

“This is basically direct evidence that there is water vapor in the atmosphere,” says Benneke, whose research was published online this week, but has not yet been peer reviewed.

Another group of scientists, whose results appeared Wednesday in Nature Astronomy, came to the same conclusion using the same data. While they can’t say whether the planet has a wet or arid climate—their models forecast between 0.01 and 50 percent humidity—they say the odds of a random statistical coincidence are lower than 1 in 2,000.

But if any future explorers do find themselves floating through K2-18b’s atmosphere, they shouldn’t attempt to land. The planet’s size and weight make it rather wispy by terrestrial standards—almost all hydrogen gas with little to no solid matter for alien creepers to crawl over. While our solar system lacks a true analog, Benneke suggests that a mini Neptune might serve as a better mental image than a supersized Earth. “I would not expect any Earth-like life because of the absence of the surface,” he adds.

K2-18b’s skies may be even more familiar than the mere presence of water suggests. Benneke’s analysis detected slight amounts of light being blocked—making the planet look slightly thicker—at all wavelengths. Since the planet’s low density rules out a surface, he interprets this obstruction as a side effect of the water. “The most likely explanation is that this is actually a cloud deck of liquid water droplets very similar to the Earth,” he says. “It’s quite likely that there’s even rain.”

The other team, however, isn’t quite ready to start issuing exoplanet weather forecasts. “Our models are fully consistent with clouds,” writes Ingo Waldmann, an astronomer at University College London who worked on the Nature Astronomy analysis, in an email, “but we cannot conclusively say clouds are there or not until [we get James Webb Space Telescope] observations.” He and his colleagues checked the observations against models of both cloudy and non-cloudy atmospheres, and found that neither was a significantly better fit than the other.

In addition to lacking a surface, K2-18b also orbits a star quite different from our sun. As a small dwarf, it shines nearly 40 times less brightly, and its cooler temperature makes it more red than yellow. That’s no problem in terms of providing energy—the planet orbits much closer than Earth does, making a lap in about a month, so it gets similar warmth—but the star’s frequent flares likely bath the planet in ultraviolet radiation. UV flares aren’t necessarily a deal breaker for life, but they don’t make living easy.

The real significance of studying more exoplanets with atmospheres like K2-18b, Benneke says, is that they help answer major questions about how stars shape their planets, such as how much dwarf stars destroy the thin atmospheres around more life-friendly, rocky worlds. K2-18b’s thick atmosphere is impervious to such stellar activity, but the techniques used to study it will be invaluable as more powerful telescopes secede Hubble in the near future.

“In the overall storyline of humanity finding life across the universe,” Benneke says, “this is maybe the furthest we have come so far.”