The discovery comes after two decades of watching one of our closest stars. 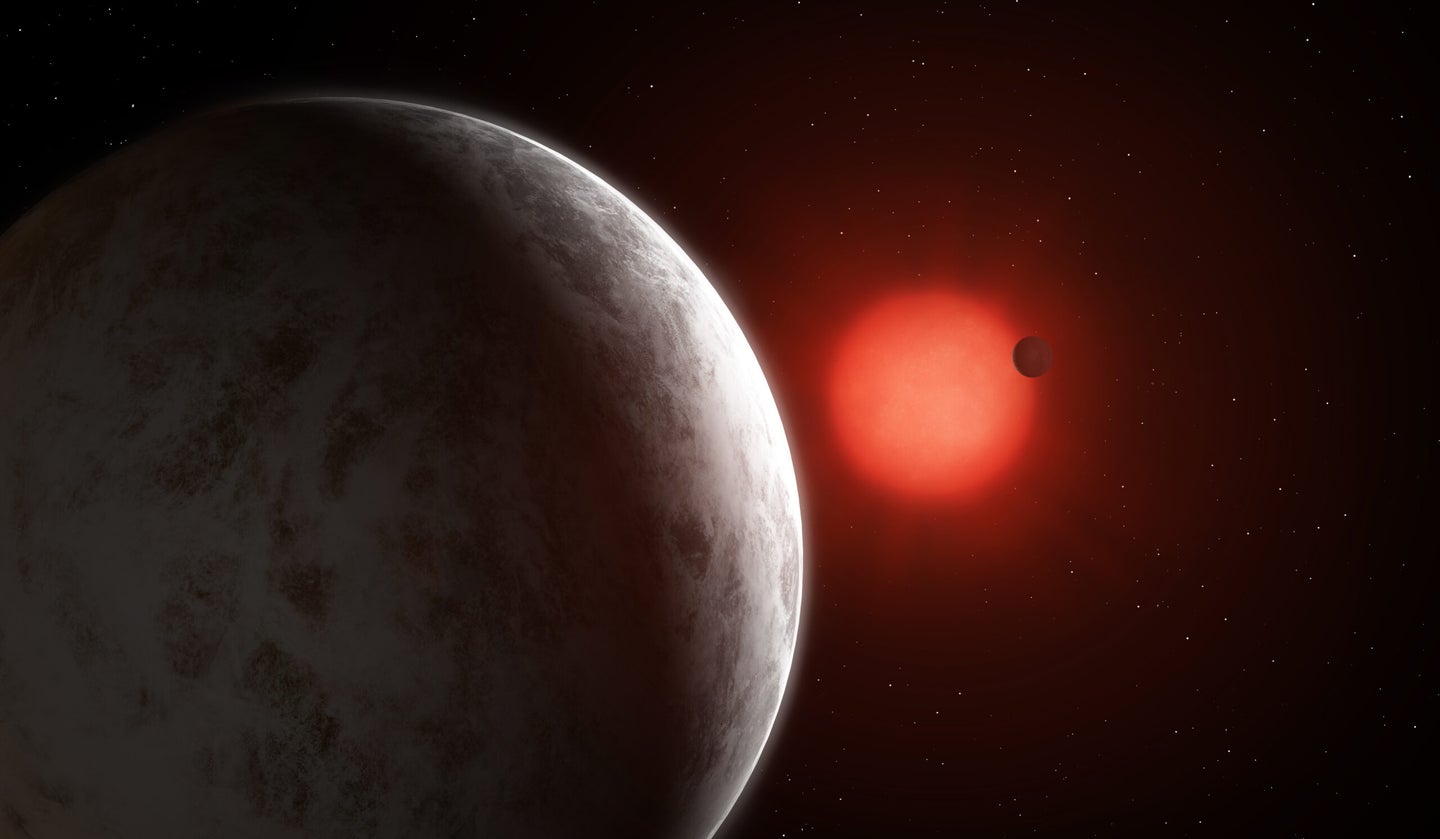 Space telescopes like Kepler and the Transiting Exoplanet Survey Satellite (TESS) have made hunting for exoplanets an industrial pursuit. Their mechanical eyes watch thousands of stars simultaneously, and software efficiently sifts through the mountains of resulting data, highlighting only the most promising stellar flickers and wobbles for manual confirmation. The process has revolutionized planetary science like the assembly line revolutionized manufacturing: just 28 years after the first confirmed exoplanet discovery, NASA’s catalog is bursting with more than 4,000 confirmed exoplanets spanning more 3,000 systems.

Sandra Jeffers, a researcher at the Institute for Astrophysics at Goettingen University in Germany, is part of a team taking a more bespoke approach, searching nearby stars one by one for high-quality exoplanet targets that could someday be studied directly. Now years of analysis based on decades of data has uncovered one of the most promising targets yet, the group announced Thursday in the journal Science. Two, possibly three “super-Earths” orbit a bright but quiet red dwarf star sitting just 11 light years from Earth. Astronomers generally struggle to infer much more than an exoplanet’s orbit or size, but the rare combination of traits in the so-called Gliese 887 system means that upcoming telescopes may be able to access information about the gases surrounding the planets—and therefore learn something about their climates—as well.

“We know it’s the best star in close proximity to the sun with the aim of understanding the exoplanets atmospheres,” Jeffers says.

Jeffers leads a collaborative project called RedDots, which targets stars within about 16 light years of the sun—most of these are dim, red dwarf stars, hence the name. She’s spent years chasing down astronomers at conferences who she suspects might have recorded observations of nearby stars and inviting them to collaborate. In the case of Gliese 887, Jeffers managed to cobble together a dataset representing 20 years of work from more than two dozen researchers on a handful of telescopes. “[The field of] exoplanets can be cutthroat,” she says, “but working with this team it was very cooperative.”

The group saw hints of planets in 2017, but their observations were too sporadic to be conclusive. In the fall of 2018, they went back and stared at Gliese 887 every night for nearly three months with the High Accuracy Radial Velocity Planet Searcher (HARPS) instrument in Chile.

That did it. By generating a visualization analogous to a time-lapse movie, the team could clearly tell that Gliese 887 was jiggling. Specifically, it bobbed approximately every nine, and every 22 days—unmistakable signs of two nearby planets, which they concluded weigh at least 4 and 7 times as much as the Earth, respectively. Both worlds orbit a bit too close to their sun for water to likely exist on their surfaces, but the team also noticed a tentative sign—a single jiggle—of a potential planet making a 50-day orbit in the star’s temperate zone. They have since returned for a further two months of observations, which should be enough to prove or disprove the third planet with more number crunching in a future paper.

Although the two confirmed planets seem too hot to comfortably host life as we know it, the system is an observational dream. On top of being just 11 light years away (our nearest star system is about three times closer, but many exoplanets are hundreds to thousands of light years away), Gliese 887 is an unusually chill star. It has few sunspots and rarely flares up, unlike many of its hothead red dwarf peers. Its calm disposition makes it an ideal target both practically (a calmer star is more of a blank canvas that cleanly showcases planets’ features without completely washing them out), and scientifically (because it’s less likely to strip its planets of their atmospheres with bombastic solar flares).

Current telescopes can’t quite make out the atmospheres around such planets since they don’t pass directly in front of their stars—a special case that has made it possible for astronomers to peep the atmosphere of certain other exoplanets. But Jeffers expects the next generation of telescopes to change that. “This is an ideal science case for the [James Webb Space Telescope] due to be launched next year,” she says.

Other researchers are cautiously optimistic. “This one’s good,” says Tomas Greene, an astrophysicist at the NASA Ames Research Center who studies how the space-based Hubble successor will help study exoplanet atmospheres. “The first question is whether it has an atmosphere or not, and JWST should be able to help with that.”

Specifically, JWST should be able to watch for fine temperature variations of the whole system as the planets swing in and out, alternatively showing their daytime side and nighttime side to Earth. A naked, rocky planet with no atmosphere should experience wild temperature swings. It’s groundbreaking work, but it won’t be easy. “These will be difficult observations that will take a lot of time,” Greene cautions. Researchers will need to stare at the system for multiple orbits of each planet, much like they did for the HARP observations.

Not even JWST will have keen enough eyesight to spot the individual planets and find out which particular gasses might swaddle these super-Earths. Those studies may have to wait for the next generation of ground based telescopes, such as the Giant Magellan Telescope and the Thirty Meter Telescope, which could come online toward the end of the decade. With better resolution than JWST and (somewhat) less competitive observing time for longer projects, these instruments should be able to accumulate enough direct light from the planets to spot signs of water, oxygen, and perhaps methane, Greene says. While these nearby worlds may not be top candidates for life themselves, they could serve as windows into the nature of other exoplanets too far off to image directly.

Understanding alien atmospheres represents one of the next frontiers for exoplanet science. One can infer only so much about a world from its location and size, but knowing the molecules that surround it takes researchers a step toward being able to predict its climate. Gliese 887′s second planet, for instance, could turn out to be a somewhat hospitable place, Jeffers says, if it has an atmosphere to help spread the heat around. “It could be a hot beach day on the actual surface of the planet,” she says.

While they wait for JWST to launch and for construction on giant ground telescopes to move forward, the RedDots team remains focused on readying as many nearby targets as possible. The team has already detected planets around Proxima Centauri (four light years away) and Barnards Star (six light years away), and they intend to keep systematically working their way out, uncovering our nearest neighbors one by one.

“That’s our long-term goal,” Jeffers says, “to get them all.”