Astronomers caught a star-on-star smack down

New observations offer the best look yet at how one star can take down its neighbor. 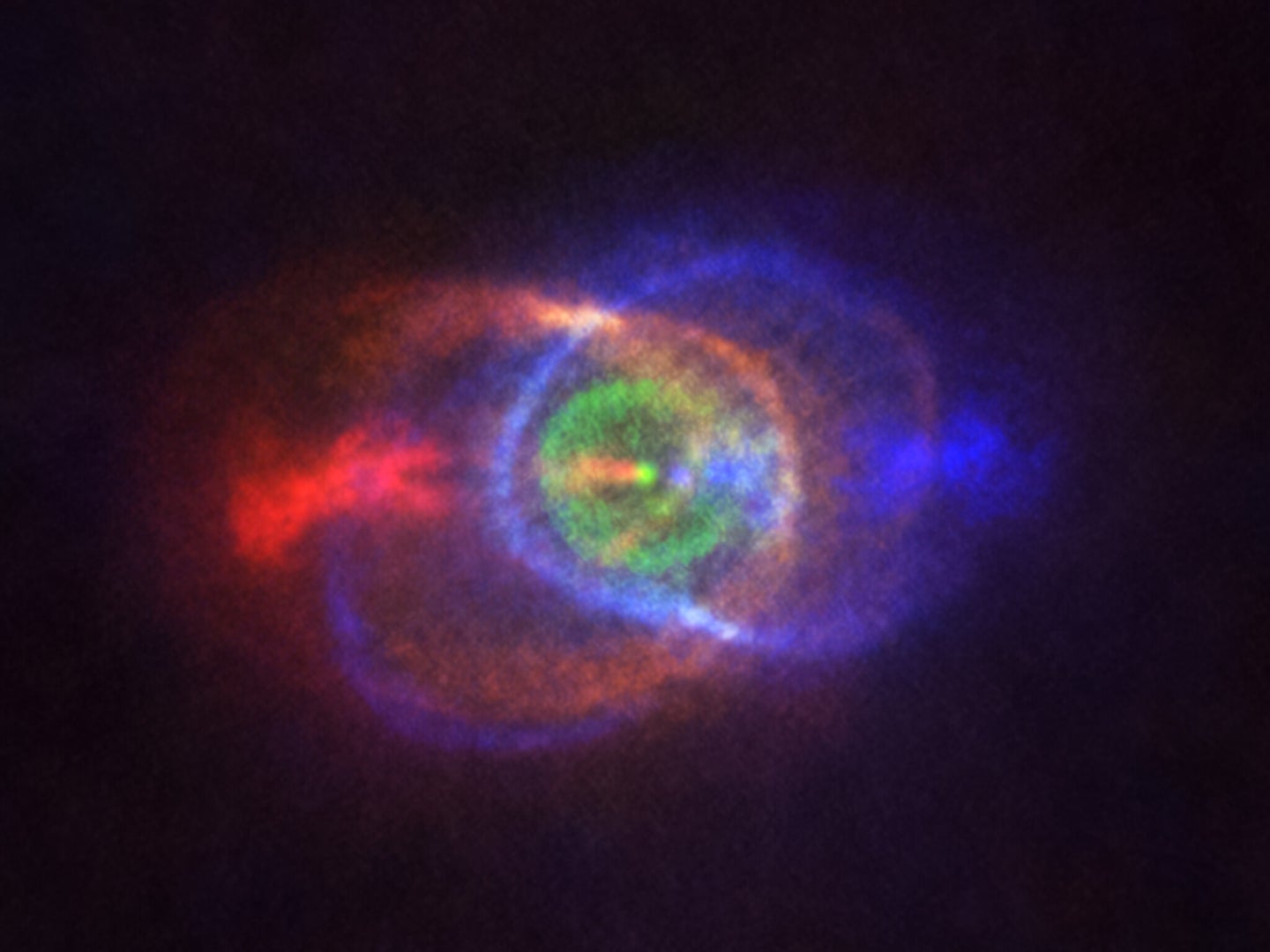 The lives of stars, not unlike human lives, often end in the relative blink of an eye. After burning for billions of years, a modestly sized star turns red, puffs up into a giant, and sloughs off its outer layers, all in the span of a millennium or so. These death throes expel clouds of dust and gas—known as planetary nebulae—that scatter stardust throughout the void while delighting astronomy fans with intricate shapes and (artificially administered) psychedelic color schemes.

But astrophysicists have long known that the story couldn’t be that straightforward. While stars are simple, round balls of gas, many of these ex-stars have complicated, not-at-all-spherical shapes. In these cases, something, likely a nearby star, must have gotten roped in at the hour of death, spurring a furious and hard-to-model tango. Now, using Chile’s ALMA observatory, a team of astronomers has snapped the sharpest image yet of one such system (dubbed HD101584) mid-dance, giving theorists a detailed look at this rare event.

“The most exciting thing about these observations is the evolutionary phase in which they find the system,” says David Jones of the Institute of Astrophysics of the Canary Islands, who was not involved in the research. Here, the two stars started to engage “a thousand years ago or less, making HD101584 truly ‘fresh out of the oven.’”

HD101584 first turned heads in the 1980s when astronomers noticed that it shone a bit too bright in the infrared part of the spectrum—a hint that dust and gas swirled through the system. Later observations caught the star wobbling, implying a gravitational tug from a nearby companion.

Astronomers would have to wait for ALMA, an array of parabolic dishes that can be arranged to act as a miles-wide telescope, to get a detailed look. Zooming in on HD101584, which sits perhaps 3,000 light years away in our galaxy near the “Southern Cross” constellation, revealed the shape of the nascent nebula’s clouds in never-before seen detail.

Blind to the visible light of the stars themselves, ALMA images the system’s gas and dust and clocks their speeds using light falling between infrared and radio waves. From our Earthly perspective, the green circle represents a ring of material expelled outward. This ring lies flat in the plane of the pair of stars, which orbit each other in the middle of the central green dot. Powerful jets rocket molecular gas both directly at us (blue) and away from us (red) at nearly 100 miles per second. While these foreshortened structures appear circular from Earth, from the side they would form stretched out waterdrop-like shapes tearing away from the central stars.

In these features, Hans Olofsson, an astronomer at Sweden’s Onsala Space Observatory who worked on the new research, sees a tale of stellar drama. Around 1,000 years ago the central star ran out of fuel and swelled into a red giant. Our sun will do the same in a few billion years, roasting the inner planets (us included) in the process. No one knows if this star had planets, but it did have a companion star, and it grew so big that it literally swallowed that companion—entering into a poorly understood phase called “common envelope” evolution, when one star seriously invades the personal space of another.

Orbiting inside the red giant’s fiery plasma, the companion struggled to stay afloat and spiraled rapidly toward its partner’s core. The two stars would have collided, had the giant not simultaneously sputtered, hurling off material and shrinking enough for the companion to emerge from the envelope, ending its fatal dive. Today the two orbit each other peacefully at something like the distance between Venus and the sun. The interaction ended as quickly as it had begun, and, had astronomers built ALMA a couple hundred years earlier, they might have been able to watch it in real time.

But the new observations, which appeared last year in the journal Astronomy and Astrophysics, represent the next best thing. Because the spiral—which astrophysicists call “the plunge”—happens so much faster than the leisurely initial orbiting, no theory can currently describe the whole process from beginning to end. Instead, theorists try to capture one step at a time. As a result, the overall picture remains rough and uncertain, which makes this real-life snapshot invaluable. “In simulations, we don’t have a complete structure like this,” says Natasha Ivanova, an astrophysicist who studies common envelope evolution at the University of Alberta in Canada.

In the new data, she sees both successes to celebrate and mysteries to ponder. The jets in particular match the shape and mass of jets that such systems should eject around the time of the plunge, she says, and further analysis may settle a minor debate over whether the jets switched on before or during the plunge. She also finds the ring-like shape of the green gas—the remnants of the red giant’s envelope—peculiar, and wonders if all such systems throw off their outer layers as a flat, equatorial pancake, rather than a spherical shell.

Future observations and analysis may answer some of these questions, but for now researchers are content to marvel at their luck in capturing such a well-timed snapshot. “I was happily surprised that it was so spectacular,” Olofsson says.