‘Oumuamua sure looked like an oddball, but similar planetary tatters could be floating everywhere. 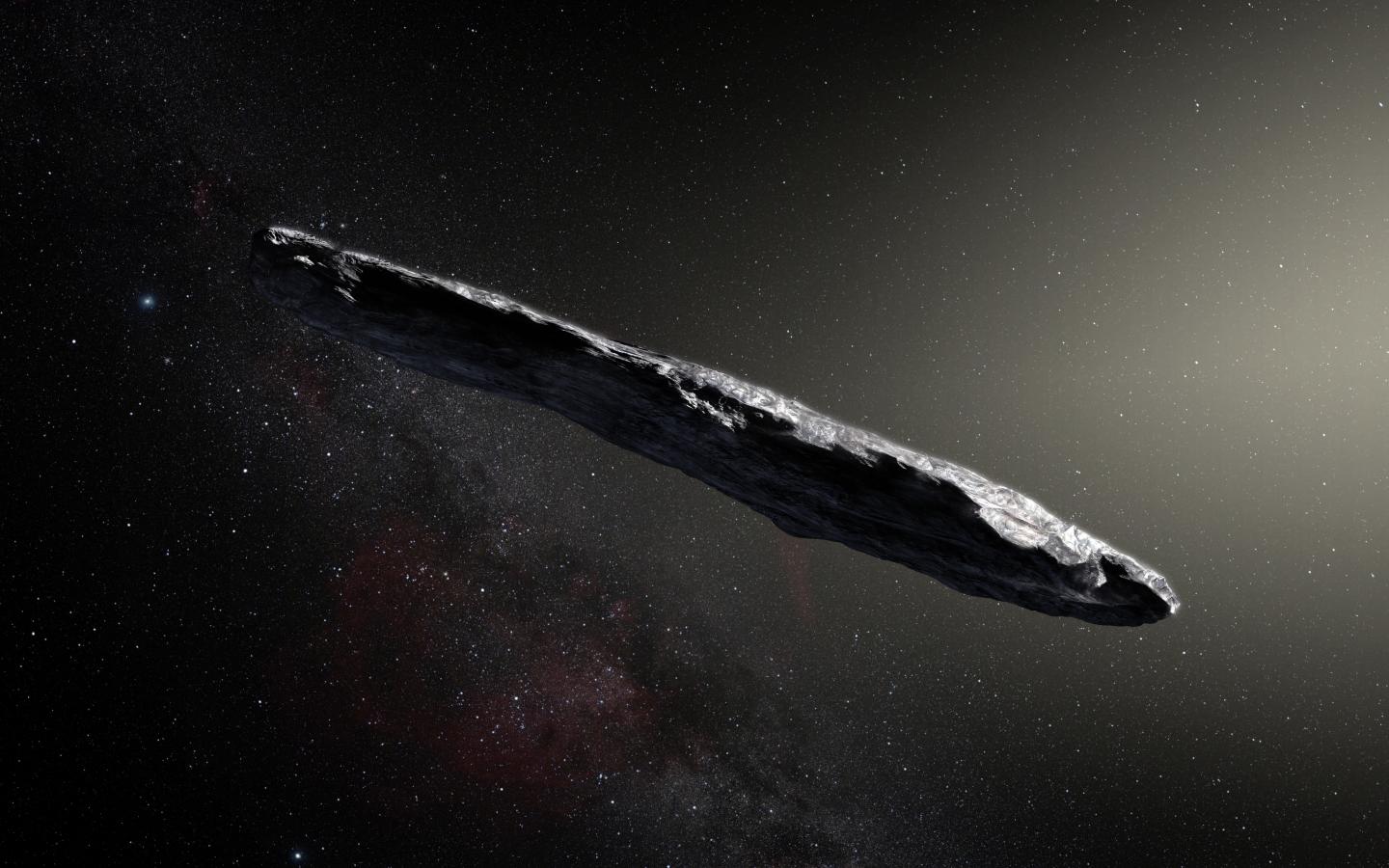 A close approach to its host star could have torn a comet into smaller pieces. Perhaps one of those slivers found its way into our galaxy. ESO/M. Kornmesser
SHARE

‘Oumuamua shattered astronomers’ expectations when it streaked past the sun in 2017. It was skinny, not round. It looked rather dry with ruddy hue—nothing like the ice ball it should have resembled. To make matters worse, it jetted away as if it were moving under its own power. The first interstellar object to be spotted in our solar system exploded researchers’ assumptions about what sorts of bodies are most likely to escape their host star, and how. Three years later, they’re still trying to figure out where they went wrong.

New results based on computer simulations, which appeared Monday in Nature Astronomy, aim to tie up all ‘Oumuamua’s mysteries into one explanatory package: once upon a time, a distant star shredded a comet or planetary fragment, spraying thin comet-asteroid hybrids out into the void. If the theory proves accurate, then ‘Oumuamua represents just one of a countless number of such objects, ejected by similar stars across the galaxy.

“We are confident that this scenario we proposed is common,” says Yun Zhang, a researcher at the Observatoire de la Côte d’Azur in France and co-author of the work. “We expect we will see more things like ‘Oumuamua in the future.”

Astronomers have been anxiously awaiting the first signs of an interstellar interloper for the better part of a decade, but it wasn’t supposed to look anything like ‘Oumuamua. It was supposed to be a comet—a dusty snowball that would cast off a dramatic tail as it melted in the sun’s glow. Comets in our solar system follow looping orbits that push them right to the edge of the sun’s domain, where the slightest gravitational nudge could knock them free. (Nature obliged this intuition last year when Borisov—a classic comet—became the second interstellar object to be discovered in our solar system. It has since sizzled into pieces after swinging around the sun.)

‘Oumuamua looked more like an asteroid, the other type of small body common in the solar system. These pebbly sand piles are dark and dry, with little water or ice for the sun to mess with. Numerous attempts have failed to find signs of a tail behind ‘Oumuamua, although it did inexplicably speed off as if being pushed by a jet of gas. What was driving its hasty retreat? And if it was an asteroid, which tend to huddle close to their host star, what had kicked it out into space?

Neither the “comet” nor the “asteroid” label fit well, suggesting that something new had formed around ‘Oumuamua’s host star. Guesses ranged from alien spaceship to fluffy ice cloud. “It’s really a mystery,” says Matija Ćuk, an astronomer at the SETI Institute. “We really don’t understand it.”

In late 2017, Ćuk suggested that a phenomenon called “tidal disruption” could have birthed the cigar-shaped object. Tidal forces lie behind gravity’s ability to distort a body, such as when the moon stretches the Earth’s girth, resulting in the daily rise and fall of oceans against the shore. They’re also one of the many ways a black hole could kill an astronaut, stretching her out like a piece of spaghetti. Ćuk proposed that a similar event could have shredded an entire planet into ribbon-like strands, and that ‘Oumuamua was a piece of flotsam from one such Armageddon.

Zhang’s work took Ćuk’s idea further, fleshing it out with physical details to see if it was possible. She and a colleague modified a popular simulation that considers how the particles in an asteroid-like object—which she likens to “a sandcastle floating in space”—rearrange themselves when poked and prodded by gravity. They took a variety of objects and repeatedly hurled them at a digital star until they got a sense of what might have happened to ‘Oumuamua.

It probably started out life as a comet, Zhang says. A planet or baby planet is also possible, but those objects would be less likely to match ‘Oumuamua’s inferred composition. As the comet swung by its host star, which was perhaps half as massive as the sun, it received a tidal death squeeze and got shredded. Zhang also analyzed the fragments with a heat model, and found that the host star’s warmth would have baked the surface of each fragment into a dry and crispy crust. The same squeeze would have sent some splinters, including ‘Oumuamua, flying out into interstellar space.

While she set out only to explain the ex-comet’s shape, Zhang was surprised to find that the theory could also handle ‘Oumuamua’s bizarre acceleration. Upon arrival in our solar system, additional heat from our heavier, brighter sun reached deep through the crust and liberated residual ice, the thinking goes. Those evaporating materials then gave the object a push as they escaped unseen into space. “Our analysis showed that the simulation can explain all of ‘Oumuamua’s features,” she said, its dry asteroid-like appearance as well as its comet-like activity.

The researchers can’t be sure that this precise sequence of events definitely produced the collection of rubble that passed through three years ago. But if the process plays out as easily as the simulation suggests, interstellar space could be littered with a truly incomprehensible number of such shards. Each solar system could spew out one hundred trillion ‘Oumuamua-like objects, Zhang estimates.

For other researchers, however, ‘Oumuamua remains enigmatic. Ćuk says that it’s nice to see a simulation confirming that tidal disruption can roll cigar-shaped bodies, but wonders how often stars can really tear up their comets. “If you shred one planet you get a lot of mass,” he says. “If you’re playing with comets, you need to shred something like 10 earth masses per star, which is basically all of [the comets].”

Zhang also points out that the whole theory rests upon the assumption that ‘Oumuamua is long and skinny. If the object is more pancake than sausage, as one analysis suggested last summer, the whole tidal origin story falls to pieces.

The scout is currently zooming past Uranus, beyond the reach of any telescope, so researchers will never know for sure what ‘Oumuamua looks like or how it formed. But the Vera C. Rubin Observatory, which is slated to begin sweeping and regular surveys in 2022, should spot one interstellar object each year, according to Ćuk. Only then will astronomers be able to get a sense of what sorts of objects are whizzing around out there. “Before you do physics, you do stamp collecting,” he says. “Let’s see what else falls out of the sky.”