Now astronomers want to know: what makes a star a star? 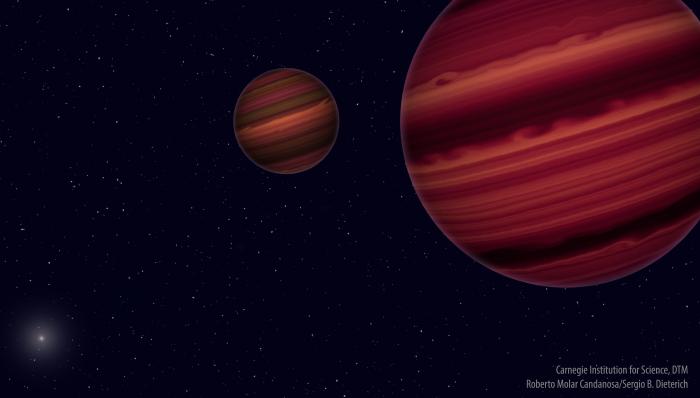 An artist's concept of the Epsilon Iridani system with the two brown dwarfs, (B and C) in the foreground, and the star they share a system with (A) in the background. Roberto Molar Candanosa and Sergio Dieterich, courtesy of the Carnegie Institution for Science
SHARE

Take a look up at the night sky. See all those stars? For every one of those bright points of light, there may be an object that failed to shine. But astronomers have spent decades trying to figure out why some balls of gas shine bright while others hide in the dark.

But now, for the first time, astronomers have found a failed star that’s just as big as a successful one—and it’s challenging what we know about star formation.

In a paper published in the Astrophysical Journal, Carnegie Institute of Science researchers looked at a bizarre stellar system around 12 light years away. The triple system involves one star slightly smaller than the Sun—Epsilon Indi A—and two failed stars, Epsilon Indi B and C.

Astronomers identified these two failed stars, or “brown dwarfs,” in 2002, but their exact mass had never been measured. The team spent years monitoring the objects and the subtle effects they had on their parent star that cause it to deviate slightly from its central position in the system.

What they found was surprising: going just by mass, at least one of these should be a star, and the other isn’t far behind. In fact, they’re the two highest mass T-dwarfs ever found. (T-dwarfs are a kind of brown dwarf that’s abundant in methane.)

“We saw that those masses were at a very critical region—right at the boundary between stars and brown dwarfs,” says Sergio Dieterich, an observational astronomer at Carnegie and lead author on the study.

Epsilon Indi B is has a mass about 75 times that of Jupiter, the largest planet in our Solar System. One of the lowest mass star for which an exact mass is known is VB10, a binary star to Gliese 752. It also 75 Jupiter masses. Epsilon Indi C is 70 Jupiter masses, which is around the absolute lowest mass a star could theoretically be.

What separates Epsilon Indi B and Epsilon Indi C from VB10 is heat. While VB10 takes hydrogen atoms and fuses them into helium atoms, giving off energy and heat (and glowing under their own power), Epsilon Indi B and C are cold. “We know those objects are brown dwarfs because they are very, very cold. The range is generally accepted to be between 70 and 80 Jupiter masses to sustain fusion. They’re colder than stars could ever be,” Says Dieterich.

While there are lots of candidate objects in the ambiguous zone between star and brown dwarf, their masses aren’t well known. But the Epsilon Indi star system offers a perfect observational opportunity for scientists. Watching stars interact with objects around them helps determine the mass of said objects, and the star itself. In this case, astronomers can observe how much these brown dwarfs “tugs” on its home star.

“These are the first unequivocal brown dwarfs (in this mass range),” Dieterich says. “There are several other objects that we know the masses, but because they’re warm, we don’t know exactly if they’re stars or very young brown dwarfs.”

That’s a crucial distinction. High mass brown dwarfs form out of the same building blocks as stars, and may even have some initial fusion (a nuclear reaction that happens naturally in stars). Brown dwarfs also burn hot during this time, appearing like any other protostar. “Young in their lives, in the first few million years, they do get a kick from fusion, but it’s only in their late lives that they will settle in as either a brown dwarf or a star,” Dieterich says. Most stars, Dieterich says, will also burn above 2100 K—another way to distinguish one from the other—though young brown dwarfs in particular may still be quite hot from their formation and thus still give off some light. (Epsilon Indi B and C give off no light and are around 900 K and 1,300 K, respectively.)

“To me, it’s a very surprising result, but it’s a very important result for our understanding of these objects,” Emily Rice, an associate professor in astronomy and physics at CUNY State Island and a research associate at the American Museum of Natural History, says. Rice was not involved in the study.

Epsilon Indi B and C may have had sporadic bits of fusion, Rice says, but she compares it to trying to start a car, where the key will turn over, but the car won’t fully turn on. With stars, “as long as you leave the engine running, they shouldn’t turn off,” Rice says.

Dieterich and his team have spent a few years hunting for objects like this, including publishing a paper in 2013 outlining a few candidates. As for why Epsilon Indi B, despite being near star mass, never became a star, Dieterich says that it may have to do with how many heavy elements are in its atmosphere, and whether the clouds of gas that make up the object were never quite dense enough to kick things off.

In general, all elements heavier than helium on the periodic table are referred to as “metals.” Under some models, some objects that are relatively free of metals may not become stars until much higher masses are achieved—masses indisputably the same as stars. “If you have no metals whatsoever, a primordial object of just hydrogen, then that stellar limit goes to 98 solar masses,” Dieterich says. But those sorts of objects haven’t existed in our galaxy since incredibly early in its history.

Coming years may bring even more strange objects at this boundary between stars and brown dwarfs. Researchers are finding small, extremely cool stars like TRAPPIST-1, that are near 80 Jupiter-masses. They may also find more objects like Epsilon Indi B, that creep up toward the star boundary. These are some of the strangest objects in the universe—and we’re edging closer to finding out what truly gives a star its star power.